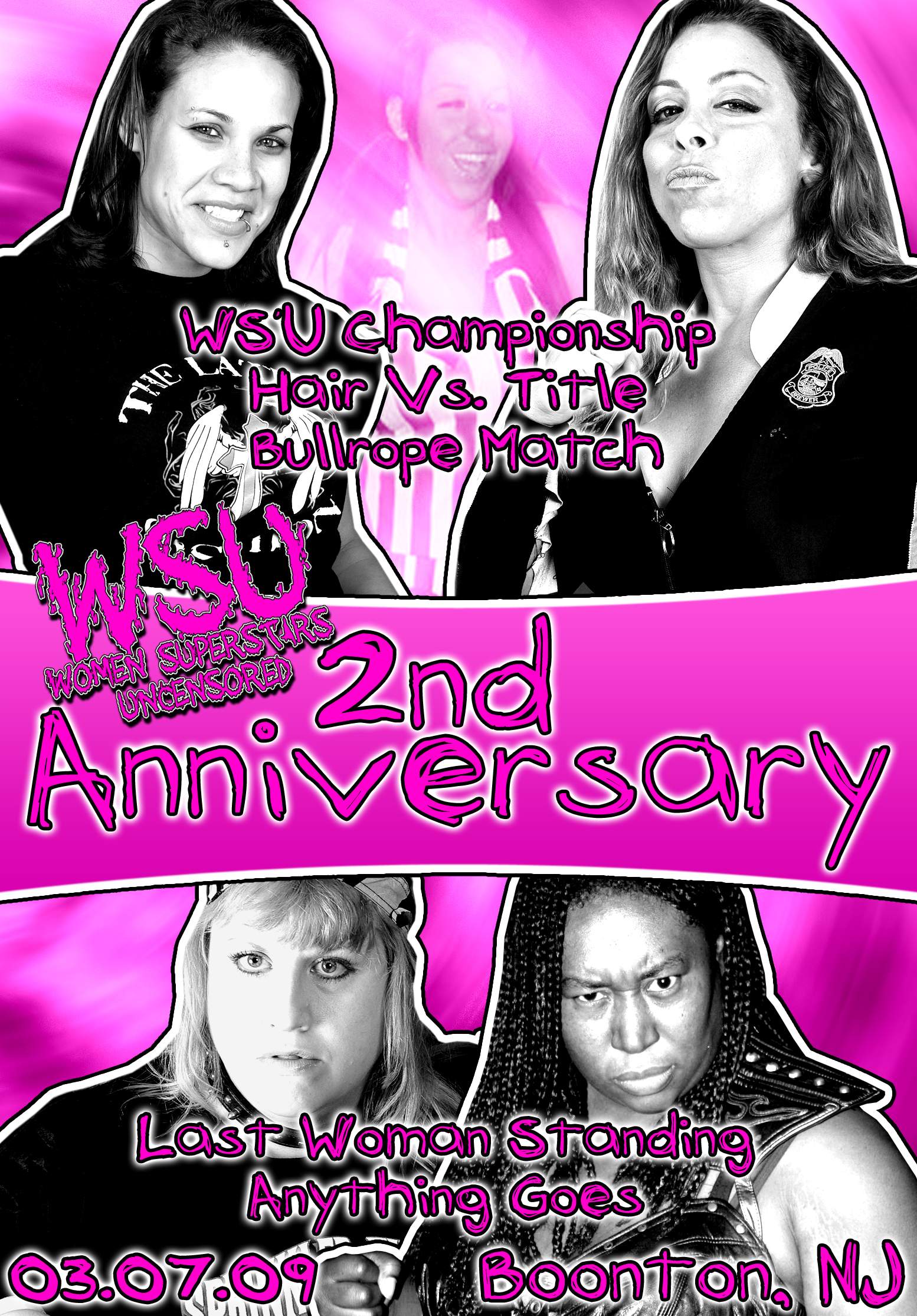 SINGLES MATCH
Cindy Rogers vs. Jetta: This match was special for two reasons; it was Cindy Rogers’ much-anticipated return from injury, and it was also British vixen Jetta’s debut with WSU. As much as I would love to see Jetta get a jump start victory in WSU competition, I felt it was important for Rogers to get the win if they want to follow through with their plans to push her to the top where she belongs. On a side-note, the female ring announcer (Destiny) was wearing one of the hottest outfits I’ve ever seen at an indy event. Seriously yummy. I’ve said it before, and I’ll say it again, Jetta is a natural heel. She challenged Cindy to something the announcers called a “look at me” contest. Jetta was a good opponent for Cindy Rogers, who began her ascent up the ranks of WSU with a great win.

SINGLES MATCH
Trixxie Lynn vs. Lady Divine: Sometimes they spell it “Trixxie,” and sometimes they spell it “Trixie,” so I don’t know what is the correct way to spell it. I think the double X looks best, so I’ll stick with that. I’m not sure if I’ve ever seen Miss Divine before, but she is billed from South Philadelphia. Apparently she is brand spanking new. The story of the match was that Trixxie was calling out Primetime Amy Lee while she was dishing out punishment to the rookie.

SINGLES MATCH
Malia Hosaka vs. Rain: This was a rare occasion where Rain was not the most experienced participant in the match. Rain was facing WSU Hall of Famer Malia Hosaka in this evenly matched contest. Missy Hyatt continued to hold a grudge on Rain during commentary for some unknown incident that may or may not have actually happened in real life. Late in the match, the referee was unfortunately knocked out and missed a couple pinfalls. Rain used a chair to flatten Hosaka and quickly got rid of the evidence as the referee woke up and counted the 1-2-3 to get an impressive win over a true legend!

WSU TAG TEAM TITLE MATCH
Miss April & Brooke Carter vs. The Beatdown Betties (Roxxie Cotton & Rick Cataldo): I felt a great deal of internal conflict when the Beatdown Betties entered the ring, because I love Roxxie Cotton so much and I hate Rick Cataldo so much. Annie Social was nowhere to be found. Cataldo has decided to wrestle barefoot, making him ten times more irritating than before. Ref Hanson & Missy Hyatt compared him to Kevin von Erich. Brooke Carter & Miss April recently won the WSU Tag Team titles at a WSU-NWS joint show. They are still way too green to be champions, but hopefully they will be able to live up the potential everybody (including me) sees in them. I have had the pleasure of corresponding by email with both April and Brooke and they are both incredibly sweet and humble. Let’s hope they stay that way! Now if I could just get the 80’s diva Roxxie to email me, I’d be a happy camper. Ref Hanson was drooling over Cataldo on commentary, claiming their relationship was “strictly business.” Brooke & April took advantage of some Bettie buffoonery to win the match and retain their titles. After the match, Rick Cataldo attacked Roxxie and blamed her for the loss (even though she did the lion’s share of the work). Amy Lee hit the ring to confront Cataldo and knocked him out of the ring with one punch! Amy Lee called out Awesome Kong to start their Last Woman Standing match early.

LAST WOMAN STANDING – ANYTHING GOES – MATCH
Awesome Kong vs. Primetime Amy Lee: The brawl started out quickly and as these monsters fought away from the ring. At this point, they started showing still photos of the action on the screen. What is going on? Did somebody forget to press the record button? Judging from the still photos, the fight made its way through the concession stand and out the back door into the parking lot. It’s too bad these girls put themselves through all that and it wasn’t even caught on camera. Eventually they made it back to the ring and the main camera picked up the action. I can’t believe they even bothered to put those three minutes on the DVD. A few short minutes later, both monsters were blown up on their backs for a full ten count just as Amy Lee struggled to her feet. The referee declared Kong the winner, claiming Amy Lee had fallen down first. That whole fiasco was really disappointing. Kong bowed down to Lee to show respect, while Lee did her obligatory profanity-laced rant on the mic – challenging Kong to a steel cage match.. NOTE: After replaying the DVD, I noticed a disclaimer at the beginning of the DVD stating that their ringside camera malfunctioned due to “circumstances beyond their control.”

TAG TEAM MATCH
Team Wigwam (Alere Little Feather & Missy Sampson) vs. Kylie Pierce & Lea Morrison: This match also started out hot and heavy. Team Wigwam was out for revenge on Kylie Pierce because Kylie was responsible for Little Feather’s injury last year. Team Wigwam got the win and a little bit of revenge but that feud is far from over…. after the match, Alere Little Feather grabbed the microphone to explain that she was taking some more time off to take care of some health problems but promised she would be back better than ever!

GRUDGE MATCH
Princess Jana vs. Luscious Latasha: When the Soul Sisters broke up it seemed like the world was coming to an end. Jana wanted to be taken a little more seriously, while Latasha was content being a dancing babyface. Last month Latasha revealed that she was pregnant, and Jana responded by brutally kicking her ass. Luckily, it turned out that Latasha wasn’t really pregnant, but it certainly generated a ton of heat for Jana at the time. This was supposed to be their first big grudge match, but there was very little heat being felt in the building. That’s not to say it wasn’t a decent match, but definitely not worthy of the semi-main event. Jana mostly dominated the match and taught Latasha a lesson on the way to a submission victory.

HAIR VS. TITLE / BULLROPE / WSU CHAMPIONSHIP MATCH
Angel Orsini vs. Mercedes Martinez with Alicia as special guest referee: There were some unique stipulations to this Bullrope match, where instead of having to touch all four corners to win the match, you had to touch all four corners to be eligible for a pin or submission attempt. Also, Mercedes Martinez’ hair was on the line, and since no woman in their right mind would shave their head for an indy payoff, you pretty much knew who was going to win. Martinez was looking really hot, but also very tough, while Orsini was just looking tough. Alicia wisely banned Rain from ringside before the match, thus crushing any dastardly plans the heels may have had in store for this match. Angel touched her four pads within moments of the opening bell, making her eligible for pinfalls. The only bad thing about this match was Missy Hyatt’s retarded commentary. When the fight spilled out of the ring, we were once again treated to still photos of the action (due to the ringside camera malfunctioning – as I explained before). It’s terribly unfortunate that this would happen at one of the biggest shows in company history and for one of the best matches to ever take place in WSU. The rest of the match was a psychological war, with Mercedes desperately trying to hit all four pads, but Angel repeatedly prevented it. Finally after a grueling match, Martinez hit the four pads and followed up with her finisher for the 1-2-3 to win the match and FINALLY capture the WSU championship! The babyfaces hit the ring for a long celebration with the new champ, “Latina Sensation” Mercedes Martinez!