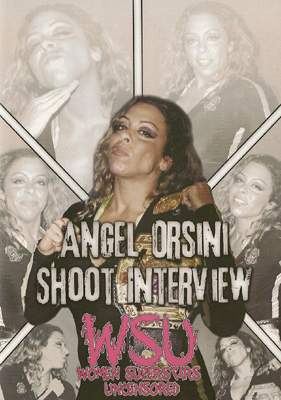 If you’re at an independent wrestling show and you hear somebody shout “HOW YOU DOIN’?” you better look over your shoulder and get out of the way, because one of the toughest female pro-wrestlers is about to hit the scene. You might know her from her days involved with MMA, or maybe you remember her as Prodigette during the final days of Extreme Championship Wrestling. She has also wrestled as Riptide, but right now she is dominating the circuit under her real name – Angel Orsini.

This would be the first shoot interview produced by Women Superstars Uncensored, and who better to focus on than the greatest WSU champion of all-time. There sure is a lot of material to cover as the moderator sits down with Angel Orsini to dissect her career in this three hour interview. Angel told some funny stories about the ECW locker room, and walked the viewers through all the important points of her life. After watching these types of interviews, I almost always end up with a newfound respect for the person, but it also destroys their wrestling gimmick and throws kayfabe out the window. I guess these days it doesn’t really matter.

Orsini covered many topics including her thoughts on MMA, managing the Sideshow Freaks in ECW, wrestling in Europe, returning to the United States, and opinions on other wrestlers such as Chyna, Lita, Amy Lee, April Hunter, and Talia Madison (Velvet Sky). Angel also talks about SHIMMER, WEW, Luna Vachon shooting on the Diva Killaz, her feud with Mercedes Martinez, the WSU championship, an inventory of injuries she has suffered including a devastating injury she suffered in a Ladder match with Sumie Sakai which she blamed on a sl*tty referee, and an endless amount of significant topics.

One thing I dislike about most shoot interviews is that the scenery never changes. You’re sitting there for upwards of two or three hours watching the subject of the interview sit behind a desk or in a chair and the camera never moves. I think these things could be 100% better if the video editors spliced in some visual effects like still photos or video. In this case, WSU had no excuse since they could have shown countless clips from Angel’s wrestling matches to visually demonstrate what Angel was talking about. Sure, there is something to be said for seeing the facial expressions when they talk. I also like when shoot interviews change locations. For example, shoot thirty minutes of footage indoors, then go to an outdoor park and set up there for forty five minutes, then go somewhere else for a while. This interview was three hours of just watching Angel sit behind a table answering questions. Don’t get me wrong, I was thoroughly entertained, but please understand that there is always room for improvement. I always think that they should distribute these shoot interviews on CD audio format so people could listen to them in their cars on the way to work or on their iPod while they exercise.

I must admit I did developed a new respect for Angel Orsini while watching this DVD, but she was always one of my favorite in-ring competitors so that hasn’t changed. I don’t expect to see her in WWE, TNA, or SHIMMER any time soon, since she is a little bit too stubborn to deal with the politics involved with those promotions. For the time being, Angel is content with her position on top of Women Superstars Uncensored, a promotion that has come a long way in a short period of time. Angel’s wrestling style is very gritty, and takes the modern day wrestling fan back to when skill and ability mattered, when boobs and designer clothes were insignificant, when a bruise was worn like a badge of honor.