WSU Dawn of a New Day 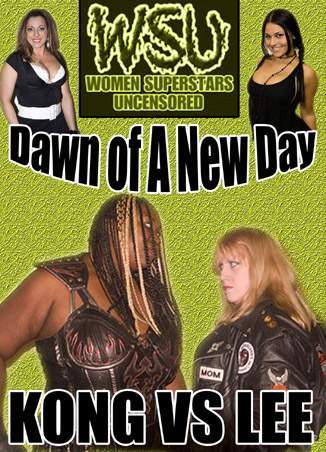 DAWN OF A NEW DAY

OPENING MATCH
“The Latina Sensation” Mercedes Martinez vs. Mickie Knuckles (debut): Both of these girls have built up quite a reputation for themselves, for completely different reasons. While Mercedes Martinez is known as one of the best female technical wrestlers in the United States, Mickie Knuckles is known predominantly for her adventures in the hardcore realm – although she can wrestle when called upon. This was one of the rare occasions that Knuckles got down and dirty in a good old fashioned technical wrestling match – so I can’t complain. I’ve seen some pretty incredible matches involving the Latina Sensation, so the bar is set pretty high as far as I’m concerned. It was a decent match to start the night, ending with Martinez scoring the pin to attain victory.

BACKSTAGE SEGMENT
Rick Cataldo & Roxxie Cotton + Annie Social: Cotton and Cataldo annoyed me for about fifteen seconds before turning their attention to their partner tonight – Annie Social (talk about opposites).

SIX-WOMAN TAG TEAM MATCH
The Soul Sisters (Jana & Latasha) & Alere Little Feather vs. Annie Social & Roxxie Cotton & Rick Cataldo (male): I was feeling somewhat cheated when my girl Little Feather didn’t get to do anything in the previous match so I was happy that she was added to this six person tag. If you don’t know how I feel about Rick Cataldo, you can just go back and read my previous WSU reviews because I’m going to give him a break and not even mention him for the rest of this review. They engaged in a dance-off before the match, which everybody but Annie Social took part in – you know, because she is ANTI-SOCIAL! Annie has a good gimmick, nice look, decent skills, and is enigmatically cute. After a while, Annie Social served up Latasha on a silver platter, but Rick and Roxxie argued over who would score the pin. It goes without saying, Annie was not impressed with her partners! The Soul Sisters recovered, and with help from Alere Little Feather, they got the victory after pinning Cataldo. Note to Annie Social: Drop me an email, I need help with your profile.

MATCH
Lacey von Erich w/Missy Hyatt vs. Angel Orsini: I was embarrassed to be a wrestling fan when I saw the blond-haired bimbo Lacey von Erich come through the curtain accompanied by the “Walking Riot” Missy Hyatt. Lacey von Erich doesn’t look anything like a wrestler. She was barefoot (a tribute to uncle Kevin?), and wearing skimpy black panties and a tight pink top. It was enough to give the little boys in the audience a little wood, but did nothing for me, since I watch professional wrestling to see wrestling matches. The only thing more disappointing than my first impression of Lacey von Erich is her complete lack of skill or charisma. Poor Angel Orsini, a grizzled veteran, had to work with this plastic Barbie-doll and actually sell for her terrible offense. The announcers confirmed my theory by comparing Lacey’s decision to wrestle barefoot to her uncle, Kevin von Erich. All eyes were focused on the ring, and the fans were praying to the wrestling Gods for a wardrobe malfunction. Missy Hyatt signaled von Erich to go for the kill, and Lacey applied the famous Iron Claw and forced Orsini to submit. Poor Angel.

IN THE RING
Becky Bayless + Dawn Marie: The chronically cute Beck Bayless came out and said she heard Alexa Thatcher was telling people that she (Becky) was ducking her. Becky Bayless informed the crowd that she was the Texas Ladies champion. Becky said there was nothing in it for her to wrestle Alexa Thatcher. Bayless said the WSU promoters found Dawn Marie in a nursing home in New Jersey. Bayless said she wanted to wrestle Dawn Marie. Dawn Marie came out and cut a promo on Becky and then chased her backstage!

NO-DQ FALLS COUNT ANYWHERE MATCH
Primetime Amy Lee vs. Amazing Kong: This match was called the “Most Barbaric & Brutalest Match in WSU History.” This is the kind of main event that should have been developed over the span of four or five DVD’s to create a little buzz and publicity for the promotion. The irresistible force indeed met the immovable object on Macy 8, 2008 in Lake Hiawatha, NJ. It was not pretty. Both brawlers were on a mission to destroy the other, but it was Amy Lee who took the majority of the punishment. It looked as though the WSU bully, Primetime Amy Lee, had finally met her match. For the first time in WSU history, Amy Lee was busted open and completely vulnerable. Kong back-fisted Amy Lee but purposely aborted the pinfall attempt so she could dish out some more punishment. Kong locked in the Single-leg Crab until the referee stopped the match. They said the important thing was that Amy Lee did not submit.