INTRODUCTION: Women Superstars Uncensored released only one DVD this month, featuring matches from their Holiday-themed December 12th event in Flemington, New Jersey, including TNA monster Awesome Kong challenging Mercedes Martinez for the WSU championship. The enthusiastic Tommy Wong & Jimmy Gentry are back doing commentary, and thankfully there was no sign of Missy Hyatt or Primetime Amy Lee. The show started with a brand new set of legs in the ring; long slender legs that belong to TNA Knockout So-Cal Val! She was there to share the duties with the usual WSU ring announcer vixen Destiny. My guess is that TNA sent Val to make sure all TNA employees were properly introduced as TNA PROPERTY. 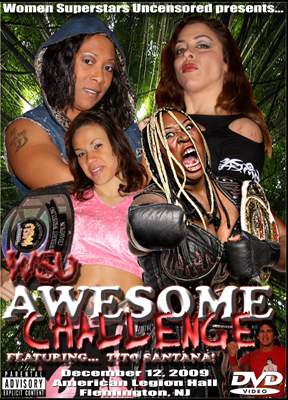 SINGLES MATCH
Nikki Roxx vs. Cindy Rogers: At the previous WSU event, Cindy Rogers had finally put her losing streak behind her with a victory over Sassy Stephanie. This time she was faced with a much bigger challenge, the universally loved Nikki Roxx! Roxx knocked Rogers right off the ladder that she was desperately trying to climb. After the match, Rogers cut a promo backstage saying the losing streak would come to an end starting at the next WSU show!

TAG TEAM MATCH (DID NOT HAPPEN)
Alicia & Latasha vs. Brittney Savage & Rick Cataldo w/Jana: The fans heckled Brittney Savage for her recent appearance on SmackDown!, where she was eaten alive by “The Glamazon” Beth Phoenix. Alicia must have lost a bet, because she was wearing the world’s most hideous ring gear. Alicia said her scheduled partner, Latasha, was on the way to the hospital because somebody attacked her backstage. The “commissioner” Gino Moore came out and said Latasha was indeed on the way to the hospital and Jana’s DNA was all over it. Moore announced that Brittney would defend the WSU Spirit title against Alicia right NOW!

WSU SPIRIT TITLE MATCH
Brittney Savage (c) vs. Alicia: Alicia surprised Brittney Savage with a sneak attack and the fight was on! One of the announcers dropped the F-bomb for no reason and I did not appreciate that. After some sloppy back-and-forth action, Alicia planted Brittney and pinned her to win the Spirit title and become the first ever WSU triple crown winner! After the match, Rick Cataldo & Jana hit the ring and attacked Alicia. Suddenly Jennifer Cruz hit the ring with a chair in her hand and chased the heels away. Cataldo claimed Brittney didn’t lose the match so she was taking the belt. Gino Moore booked Rick Cataldo & Jana against Jennifer Cruz and a partner of her choice. Moore also took the Spirit title off of Brittney’s shoulder and handed it to the new champion, Alicia!

SPECIAL CHALLENGE MATCH
Angel Orsini vs. Jazz: Jazz cut a promo backstage before the match, talking about the history between herself and Angel Orsini. It is a fact that both of these two bruisers were apart of the original ECW before its death in 2001. Jazz has been in championship matches at WrestleMania, so it’s quite impressive to see her in a WSU ring. They went into this match with a friendly sense of respect and competition. They both fought fair and square for a long time until the referee was knocked down. Suddenly Nikki Roxx showed up and gave Angel a Barbie-crusher, allowing Jazz to make the cover and win the match! Roxx was working on behalf of Rain. Orsini figured out what happened, and thankfully did not hold it against her friend Jazz.

SINGLES MATCH
Amber O’Neal vs. Sumie Sakai: Amber O’Neal from the “dirty south” has been on an amazing winning streak since debuting with WSU. So far she has scored four victories in a row, and has become more arrogant every time her arm is raised. O’Neal got a taste of International flavor when she faced off with Japan’s Sumie Sakai, who has soaked in enough American indy experience to develop a unique blend of both styles. Amber wanted to give Sakai the stink-face, but the perverted referee threw himself down hoping to get a face full of Amber’s tight ass. Amber figured out what was going on and it didn’t turn out to be the referee’s lucky day. Amber was goofing off and wasting time, a mistake that has cost her many matches in SHIMMER. Amber was lucky though, and managed to pin Sumie with a slightly botched modified version of her screwy backslide pinning combination. Amber O’Neal screamed into the microphone after the match and yelled at So-Cal Val for the way she announced her name. Amber challenged So-Cal Val to a match, and started physically bullying her until Jazz returned to the ring to make the save. Jazz challenged Amber to a match so she could go 2 and 0. Amber asked the fans if they wanted to see the match, and they did, but she refused to wrestle Jazz anyway. Jazz suggested they wrestle at the WSU anniversary show instead. Amber accepted, and predicted that she would improve her record to 6 and 0.

TAG TEAM MATCH
Angelina Love & Jennifer Cruz vs. Jana & Rick Cataldo w/Brittney Savage: Jennifer Cruz announced that she found a tag team partner that was even more beautiful than Brittney Savage, and introduced former leader of TNA’ Beautiful People, Angelina Love!! Rumors of Angelina’s VISA problems must have been false, otherwise she could not be working anywhere in the United States. The finish saw J-Cruz take out Rick Cataldo with a Roaring Elbow…. actually, Cataldo sold it before the elbow even had a chance to connect with his face! After the match, Angelina Love challenged Rick Cataldo to a “beautiful match” at the WSU Anniversary show.

WSU CHAMPIONSHIP MATCH
Mercedes Martinez (c) vs. Awesome Kong: The announcers said that this was the biggest match in WSU history. They also explained that it was supposed to be Rain challenging for the WSU title, but she was stuck in Mexico, so she sent Awesome Kong to take her place. Rain also claimed that Kong will hand the WSU championship to her when she wins it. They compared it to the deal made by the “Million Dollar Man” Ted DiBiase and Andre The Giant in 1987. The champion Martinez took an AWESOME beating, but kept fighting back against her AWESOME challenger. She held on and miraculously hit Kong with a massive Fishermens-buster for the win – and to retain her WSU championship. Before she could begin to catch her breath, Martinez was attacked by Nikki Roxx & Amber O’Neal (doing the dirty work for Rain). Angel Orsini & Jazz came out, but couldn’t get in the ring to help Mercedes. Roxx yelled at Kong and ordered her to finish the job, but Kong plowed Roxx instead! After the match, Martinez praised Kong for being a top competitor and agreed to give her a shot at the WSU title any time. Martinez offered her hand, her gratitude, and her respect. Kong accepted the gesture with a rare hand-shake in the middle of the ring.

FINAL VERDICT: WSU are putting an emphasis on improving the quality of their backstage promos. If you watch the first DVD’s and the latest DVD’s you will notice a remarkable difference in production value. Good for WSU. This was another great event for them, but it will only get better as they prepare for their 3rd Anniversary Show and Hall of Fame ceremony in March. This DVD also includes a bonus DVD with a couple NWS matches, including the legendary Tito Santana going up against former WWE developmental wrestler Kevin Matthews. The second NWS match involves a ghoulish tag team called the Nigerian Nightmares, who they are really pushing as a top team on the indy circuit. Picture a couple Kamala’s except twice as obese. Awesome Kong also makes an appearance as their bodyguard. Well I could tell you more about the gimmick but wouldn’t you rather see it for yourself?