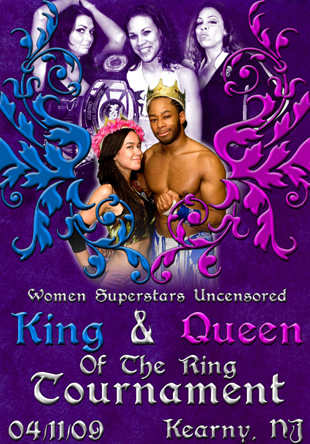 “King & Queen of the Ring Tournament”

INTRODUCTION: WSU (Women Superstars Uncensored) often teams up with a promotion called NWS (National Wrestling Superstars) to promote shows with both male and female matches. From what I have seen and read about NWS, they do a phenomenal job drawing fans to see wrestlers who shouldn’t draw fans. They tend to book stars of the past, looking for that elusive nostalgia pop. I am extremely annoyed by the method they promote these stars in their press releases, as they cannot mention a star’s name without putting “former WWE/WCW/ECW star” before their name. Even if the “star” spent barely a hiccup in ECW, like the Equalizer. Even if the “star” is using someone elses gimmick without permission, like Tom Brandi as “the Patriot.” Most of the lower card male wrestlers are local guys who will never make it in the wrestling business. Unfortunately those are the wrestlers that were available for the King & Queen of the Ring tournament.

KING & QUEEN – ROUND #1
Vicious Vinnie & Brooke Carter vs. Nicky Oceans & Autumn Breeze: Brooke Carter is one half of the current WSU Tag Team champions, along with Miss April. I don’t know much about Autumn Breeze. The men are typical independent wrestlers – nothing special. Even though she is still green, Brooke carried her team to victory.

KING & QUEEN – ROUND #1
Danny Demanto & Jana vs. Travis Blake & Jennifer Cruz: Danny Demanto teamed up with the recently turned heel, Jana. Jennifer Cruz is a WSU rookie, but she knows how to wrestle – so hopefully she will become a regular. Once again, the males were typical independent wrestlers. The match was only exciting when the girls were in the ring, and the finish saw Jana force Jennifer to submit.

KING & QUEEN – ROUND #1
Jay Lethal & Miss April vs. Helter Skelter & Trixie Lynn: Jay Lethal is the only thing special about this DVD, as he came in to team up with his real life girlfriend, Miss April – who signed a WWE developmental contract shortly after this event. I like Trixie as a mid-card talent, but Helter Skelter is another typical independent male wrestler – except he wears face paint. Miss April is the other half of the WSU Tag Team champions, and the commentators wondered what would happen if April’s team faced Brooke’s team in the finals of the King & Queen tournament. Jay Lethal was doing his TNA “Black Machismo” gimmick during the interviews but worked as himself during the matches. Lethal connected with the Machismo top rope elbow for the win!

KING & QUEEN – ROUND #1
Bison Bravado & Annie Social vs. J.D. Smoothie & Roxie Cotton vs. Sean Hanson & Rick Cataldo: Once again the NWS wrestlers were insignificant, and the WSU representatives dominated the spotlight. The breakdown of the Beatdown Betties has been heating up in 2009 and has been a major storyline on all of the WSU DVD’s. I really enjoy watching Roxie Cotton and Annie Social, but whenever Rick Cataldo (w/Sean Hanson) shows up my interest is flushed down the toilet with the rest of Kamala’s meatloaf. If it wasn’t for my enormous crush on Roxie, I would have fast-forwarded this match. It might as well have been Roxie vs. Annie vs. Rick, because nobody else in the match mattered. The finish, which saw Rick push Roxie into an accidental pinfall for Annie, was set up for the sole purpose of advancing the Beatdown Bettie storyline.

MISSY’S MANOR: Missy Hyatt interviewed Angel Orsini & Rain to hype the triple threat match with WSU champion Mercedes Martinez later in the show. Since they are friends, they had to do something to create a little heat between Rain and Angel Orsini. At first they agreed that it didn’t matter who won, as long as Martinez lost the WSU championship. Rain and Angel both agreed to give the other the first title shot after they win the title tonight. Martinez showed up and attacked Orsini, while Rain literally disappeared from the scene!

KING & QUEEN – SEMI-FINAL
Vicious Vinnie & Brooke Carter vs. Danny Demanto & Jana: The interesting thing about this match was that Danny Demanto and Brooke Carter are in a real life relationship, but they are feuding on the independent scene. I guess, because it means they get to work together and get physical in front of small audiences. Demanto tried to get Carter to lay down for him, but she refused and the match got started quickly. Late in the match, the 300 pound Demanto put 100 pound Carter in a Camel-clutch, and Carter actually “powered” out of the move. It doesn’t get any more unrealistic than that! There was so many botched spots in this match, I’m surprised they all didn’t get WWE Diva contracts. The finish saw Demanto destroy Carter with a devastating Pile-driver and Jana followed up with a submission on the already unconscious Brooke Carter to win.

POST-MATCH: Something happened after the match which was the highlight of the DVD. There was a beat-down of Vicious Vinnie, until the infamous One Warrior Nation (the fake Ultimate Warrior) showed up using the Warrior’s WWF theme music and made the save! This is the kind of stuff NWS does to entertain its fans and I’m surprised they get away with it so much. By the way, when I said “highlight of the DVD” I was being sarcastic.

WSU CHAMPIONSHIP 3-WAY
Mercedes Martinez (c) vs. Angel Orsini vs. Rain: If you purchased the King & Queen of the Ring DVD, this would be the match you looked forward to the most. As expected, Rain and Orsini double-teamed the WSU champion during the early stages of the match. Midway through the match, the three wrestlers got twisted up together and Missy Hyatt made a classy statement, “if they were naked that would be kinda cool right now!” Seriously, how much do they pay her?? Eventually Rain went in for the kill and disposed of Orsini. Unfortunately for Rain, Martinez made a come-back and finished her off with a Fisherman’s Buster to retain the WSU championship. The match was way too short, especially considering it was the most promising egg in the basket.

KING & QUEEN – FINALS
Jay Lethal & Miss April vs. Danny Demanto & Jana: It’s interesting to note that, with the exception of Demanto and Lethal, only the WSU talent has been given the spotlight. That is a good thing. No offense, but this DVD couldn’t come to an end soon enough. Not even Jay Lethal can save it at this point. There was a lot of stalling for time at the beginning of the match, with Lethal stating that Miss April could out-wrestle Demanto any time. Demanto said that he Pile-drove his own girlfriend in the second round, and that’s what he was going to do to Lethal’s girlfriend now. The last few minutes of the match were pretty good, except when Demanto hit April with a Samoan-drop and she kicked out. Do the bookers have no sense of reality? Jay Lethal & Miss April eventually won after a torturous main event, and thank God because they are the only ones who deserved it in the least. Jay Lethal lifted April up on his shoulder like Macho Man and Elizabeth 20 years earlier.

CONCLUSION: First let me apologize for being so negative, but this was a rare terrible DVD from WSU. They usually put out some really entertaining stuff. Don’t waste your time or money on this one. Here’s some advice to WSU; if you do a tournament DVD, don’t put a picture of the winner(s) with their trophy and/or crown on the cover of the DVD. Why would I want to watch the DVD if I already know the winner? And don’t list the matches for the semi-final and final on the back cover either. Just list the first round matches and print that semi-final and final matches are also included on the DVD. Leave something to the imagination. That’s kind of a no-brainer.