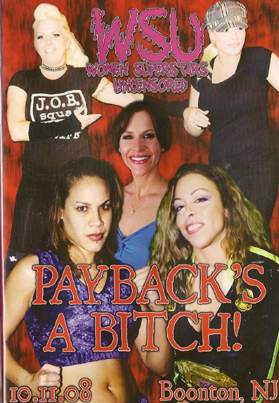 SINGLES MATCH
Malia Hosaka defeated Miss April: Miss April came out and apologized to her tag team partner, Malia Hosaka, for letting her down in the Tag Team Title Tournament. April said she wanted to prove that she could work, and thought she could do that by wrestling the best. April called out the legendary Hosaka and challenged her to a match. Hosaka played the role of mentor, and accepted the match with the spicy hot rookie. Unfortunately the match was terrible, and it was all April’s fault. I don’t know what happened and I’m sure she felt really bad afterwards. Some fans started chanting “boring” after the match and Hosaka took immediate offense to it. “This is called skill!” Hosaka screamed. “Something this girl obviously proved tonight that she has!” I’m sure she was thinking the opposite. Hosaka invited the fans to use the exit if they didn’t like it. I want to be clear; April is actually pretty good for a rookie; she just had a bad night in my opinion.

WSU Battle Royal
Won by BOBCAT!: Participants included Mercedes Martinez, Little Jeanne, Gorgeous George, Bobcat, Melissa Coates, Trixxie Lynn, Lea Morrison, Latasha, and Jana. This one started out kind of messy with the girls getting the party started before the introductions were complete. For some odd reason, the crowd was really routing for Bobcat. It came down to Mercedes Martinez and Bobcat for the final two, but WSU champion Angel Orsini showed up at ringside to sabotage Martinez’s chances of winning another shot at the WSU championship. Bobcat was declared the winner of the Battle Royal and would receive a title shot. Molly Holly came out and made some important announcements.

WSU CHAMPIONSHIP “ANYTHING GOES” MATCH
Angel Orsini defeated Bobcat w/Gorgeous George to retain the WSU championship: The next segment had Molly Holly return to the ring wearing a different outfit with black and white stripes so she could look like a referee while being a referee! In my previous WSU DVD review (Tag Team Title Tournament) I was quite critical of both Bobcat & Gorgeous George’s lack of wrestling ability. I have to admit now that I was completely wrong about Bobcat, because she is a lot better than I gave her credit for. I guess George’s suckiness rubbed off on Bobcat during the last DVD. They fought inside the ring for a while before the match spilled out onto the floor. Orsini set up a table but she was double-teamed by George & Bobcat and didn’t get to use the table. Orsini hit her finisher and Molly Holly counted Bobcat’s shoulders to the mat. Mercedes Martinez hit the ring and plowed Orsini’s forehead with the WSU belt! Martinez then DDT’d Orsini into a flattened folding chair. One fan chanted “use the table!” So Martinez hit Orsini with a Fisherman’s Suplex off the ring apron through the table down to the concrete floor! I’m not sure if that was improvised or not. Martinez stood over Orsini holding the WSU title and delivered a message to the champion. The message was clear…. PAYBACK’S ARE A BITCH.

SINGLES MATCH
Roxxie Cotton defeated Jana: My all-time favorite valley girl, and WSU tag team champion, Roxxie Cotton faced off with Soul Sister Jana. This match took place at a different venue, probably for a different promotion, and was just used to fill some time on this DVD. Whenever Roxxie takes a fit she subconsciously flaps her arms like a chicken, so mid-way through the match, the “Chicken Dance” music played over the sound system. This made Roxxie flip out and flap her arms even more. Hilarious! Roxxie proved to be too smart for Jana, and scored the pinfall to win the match. The crowd booed heavily but I cheered joyfully for my favorite wrestler!!

WSU CHAMPIONSHIP MATCH
Angel Orsini defeated Kara “Cherry” Slice to retain the WSU championship: There was another bonus match from the same show in Brick, NJ featuring WSU champion Angel Orsini wrestling former WWE Diva Cherry, known on the independent circuit as Kara Slice. Angel protested having to defend her championship against a “nobody,” asking “who are you?” The crowd really loved Cherry, and this just made Angel even madder. A few minutes later, the referee got bumped and Cherry made Angel tap out with a submission hold – but there was no referee to end the match. Orsini got up and knocked Cherry out with a belt-shot and made the cover just as the referee started to wake up. Three seconds later and Orsini was parading around the ring with her WSU championship in tact! Cherry demanded an immediate rematch but the heel champion left completely satisfied with her performance.