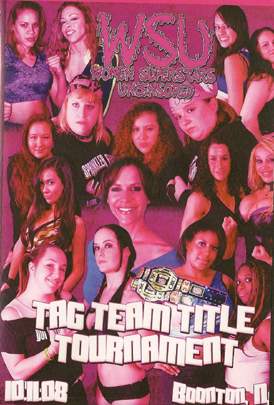 OPENING STATEMENT: WSU really took it up a couple notches in the production department for this DVD. It takes a lot of patience for any promotion to wait until the right time to introduce new championships into the fold. WSU has waited over a year to crown its first Tag Team champions.

TOURNAMENT MATCH – ROUND #1
Missy Sampson & Primetime Amy Lee w/Alere Little Feather defeated Little Jeanne & Lea Morrison: The DVD opened with some promo time from the loudmouth babyface team Missy Sampson & Amy Lee, who were left without opponents when Kacee Carlisle & Kylie Pierce decided not to show up. Missy said they refused to take a bye into the next round, and issued an open challenge to anybody in the locker-room who wanted into the tournament. The challenge was answered by veteran wrestler Little Jeanne and cute rookie Lea Morrison. Little Jeanne ain’t so little, but she’s a little bit old school – so that’s pretty cool. Morrison is just plain adorable but she is still just learning her craft. Missy & Amy dominated the match and put the young Morrison down for the count. After the match, Amy Lee ranted about Rick Cataldo’s infamous verbal tirade on her friend Tammy Sytch. Amy Lee fired Rick Cataldo and told him to get out of the locker-room! I’m all for it, but does she have that authority? I’m sad that Alere Little Feather doesn’t get to play a bigger part in the show.

TOURNAMENT MATCH – ROUND #1
Malia Hosaka & Miss April defeated The Soul Sisters (Latasha & Jana): Before the match, the Soul Sisters cut a backstage promo but Latasha kept interrupting Jana and talking over her. Latasha claimed she and Jana were back on the same page, but there was clearly some dissension in the group. They are building towards an eventual break-up. Their opponents were the legendary Malia Hosaka and the hot rookie Miss April. I’m so used to seeing Hosaka as a heel, it’s hard to get used to her as a humble babyface. April is so tiny, but I learned a long time ago not to judge a book by its cover. Considering the Soul Sisters are an established tag team in WSU, I feel the victory for Malia and April was a major upset!

TOURNAMENT MATCH – ROUND #1
The Beatdown Betties (Roxxie Cotton & Annie Social) defeated The Badass Beauties (Melissa Coates & Trixxie Lynn): Melissa Coates & Trixxie Lynn came out to “Paralyzer” by Finger Eleven, which contains one of my favorite lyrics, “if your body matches what your eyes can do you’d probably move right through me on my way to you!” The Badass Beautiful looked like they just came from the gun show! Roxxie Cotton was being extra whiney but I still have an enormous crush on her. It didn’t take much material to make Annie Social’s ring gear – she was 95% naked (basically her knees and naughty parts were covered). Rick Cataldo was nowhere to be found, so I guess he heeded Amy Lee’s warnings and hit the road. The Betties scored the victory over the Beauties to advance to the next round of the tournament..

IN THE RING
Mercedes Martinez + Angel Orsini: The babyface Mercedes Martinez came out and talked about kicking Angel Orsini’s ass the night before in a 20:00 draw. Martinez said Orsini took out her tag team partner, Reyna Fire, last night. Martinez called out Orsini and her mystery partner so they can get their asses kicked Latina-style. WSU champion Angel Orsini came out alone, acting like a Full Blooded Italian. Orsini announced that her mystery partner was Mercedes Martinez herself! Orsini relished in the idea that Martinez was going to help her become WSU Tag Team champion. Orsini claimed Martinez would not be eligible to challenge for the WSU championship if she was her tag team partner. Since when?

TOURNAMENT MATCH – ROUND #1
Angel Orsini & Mercedes Martinez (replaced by Little Jeanne) defeated Bobcat & Gorgeous George: I already told you in my previous DVD review my opinion of Gorgeous George, but what he hell happened to Bobcat? She was wearing a J.O.B. Squad shirt in honor of her husband, Al Snow. I’m not sure what has gotten bigger since I last saw Bobcat, her boobs or her hair. Bobcat & George are just TERRIBLE and it was a real shame that Orsini & Martinez had to actually sell for them. Eventually, Orsini double-crossed Martinez and revealed that her REAL mystery partner was Little Jeanne! Orsini & Jeanne advanced to the second round of the tournament!

MISSY’S MANOR
Missy Hyatt + Molly Holly + Cindy Rogers: Missy Hyatt introduced an “Original Diva” Molly Holly (yes, they called her Molly Holly). Since I don’t want to get sued, I will call her Nora Greenwald. Wow… Nora Greenwald and Missy Hyatt – talk about opposite ends of the spectrum! Nora praised WSU, and said she was most impressed with Cindy Rogers. The Definition of Technician came out in street clothes and a leather jacket. Rogers said she was still recovering from a broken collarbone. Rogers said she was going to come back bigger and better than ever. Rogers talked about her rivalry with Alex Thatcher, and reminded everyone that she still has a claim to number one contendership.

TOURNAMENT MATCH – ROUND #2
The Beatdown Betties (Roxxie Cotton & Annie Social) defeated Malia Hosaka & Miss April: Annie Social actually put some pants on for this match. I guess that sexy black thong she used for bottoms in the first round wasn’t warm enough for the October climate. It’s amazing how much more credible the Betties are without Rick Cataldo around to gay it up. Roxxie made Trixxie tap out with the Crippler Crossface – one more reason to love Roxxie Cotton!

TOURNAMENT MATCH – ROUND #2
Missy Sampson & Primetime Amy Lee w/Alere Little Feather defeated Angel Orsini & Little Jeanne: Alere Little Feather escorted Primetime Amy Lee & Missy Sampson to the ring slapping hands with lucky ringsiders. I don’t know why fans love those two so much. Sampson & Lee had some trouble with the ring steps, but I didn’t “get” the joke. Little Jeannie teamed with Lea Morrison in the first round in a losing effort to Amy Lee & Missy Sampson, and now she had a chance to extract a little revenge with a better tag partner. Amy Lee did the CLAW on WSU champion Angel Orsini’s crotch, and then did the “PU You Stink” signal. Amy Lee is one classy bitch. The fight got hostile and spilled out of the ring and into the nether regions of the building. Limited mobility and poor camera angles made this a slow couple of minutes. Eventually they made it back inside the ring, where Mercedes Martinez was shown hiding out at ringside. Martinez pulled Little Jeanne off the ring apron and put the boots to her! The Mother Truckers (as I like to call them) easily finished off Orsini in the ring. Martinez gets a small measure of revenge over her blood rival, but the feud is far from over! Amy Lee splattered verbal diarrhea all over the microphone again after the match. Why does Amy Lee have to talk/scream into the mic before and after every single match?

TOURNAMENT MATCH – FINALS
The Beatdown Betties (Roxxie Cotton & Annie Social) defeated Primetime Amy Lee & Missy Sampson w/Alere Little Feather to win the WSU Tag Team titles!!: After a brief intermission, Alere Little Feather lead the Mother Truckers back to the ring for the tournament finale with the Beatdown Betties. The storyline sort of came full circle, as it was Amy Lee who kicked Beatdown Bettie member Rick Cataldo out of WSU. I don’t think anybody in the building thought the Betties had a chance in hell of surviving a match with this pair of bonafied monsters. Roxxie & Annie immediately went after Amy Lee before realizing their offense had no effect. I sat and watched in horror as my least favorite WSU wrestler, Amy Lee (babyface), dismantled my favorite, Roxxie Cotton (heel). Amy Lee did the CLAW on Roxxie’s crotch, and that’s where I draw the line! If I was there, I would probably be the mark that jumps in the ring to save his sweetie from physical harm. Finally Roxxie got the hot tag, and it was Annie Social’s turn to take a beating – but from Missy Sampson. Roxxie tagged back in and put Missy in the Crippler Crossface. My Roxxie sure can wrestle! The Betties then took control with frequent tags and double-team moves on Sampson. Missy tagged in Amy Lee and she pounded the Betties again. But suddenly out of nowhere, Annie small packaged Missy for the 1-2-3. The Beatdown Betties became the first ever WSU Tag Team champions!!!! Roxxie & Annie wisely grabbed their championship belts and bolted as Amy Lee became aware of the situation. I think I saw steam coming from her ears. The crowd chanted B.S. – so I guess I am the only person happy with the outcome of this tournament! Amy Lee spewed vulgar threats at the Betties over the microphone and steam-rolled backstage in search of revenge.