WSU Push It To The Limit (DVD Review) 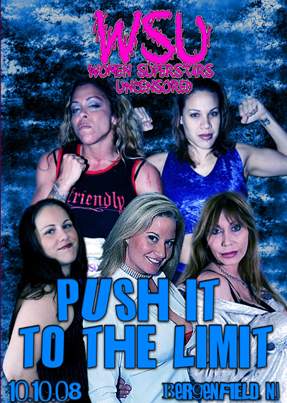 “Push It To The Limit”

SINGLES MATCH
Jana vs. Miss April: This was a bit of a preview match, since these two girls would find tag team partners and face off in the upcoming Tag Team Title Tournament. Miss April is nothing like I imagined. I imagined blonde, she was brunette. I imagined dumb, she was quite intelligent looking. I imagined plump and old, she was fit and young. She was accompanied by the eternally worthless Gorgeous George (aka Stephanie Bellars). How can she even get away with using that name anyway? Jana set out to test her own skills, and wanted to see what kind of skills the rookie had. Jana used a veteran-style schoolgirl roll-up to score the 1-2-3 to win! After the match, Jana endorsed April with a hug and they convinced Gorgeous George to come in the ring and dance (just like her regular job except she got to keep her clothes on this time).

MISSY’S MANOR (INTERVIEW SEGMENT)
Missy Hyatt + Little Jeanne + The Beatdown Betties (Roxxie Cotton & Annie Social): Missy Hyatt had some interaction with NWS Commissioner Gino Moore claiming that she had a relationship with him – then bitched at him for something he put on his MySpace. If you like Missy Hyatt, you’ll love this. It was over my head. Missy interviewed returning veteran Little Jeanne, whose presence adds a whole lot of credibility to the promotion. They were interrupted by Roxxie Cotton and a nearly nude Annie Social. Now these are a couple of Betties I can get behind. Annie Social was practically naked in her skimpy Goth ring gear – no complaints. I am happy to report that Rick Cataldo was nowhere to be found. Insults were thrown back-and-forth, which lead to a one-on-one contest between the adorable Roxxie and irritable Jeanne.

SINGLES MATCH
Little Jeanne vs. Roxxie Cotton w/Annie Social: Jeanne gave the younger Roxxie a lesson in old-school wrestling. Annie Social was constantly interfering on behalf of Roxxie, but ended up distracting Roxxie and inadvertantly costing her the match. Little Jeanne German-suplexed Roxxie and pinned her 1-2-3 even though Roxxie’s shoulder was off the mat!

TAG TEAM MATCH
The Beatdown Betties (Annie Social & Rick Cataldo w/Roxxie Cotton) vs. Melissa Coates & Trixxie Lynn w/Tammy Sytch: Annie Social explained that her tag team partner, Rick Cataldo, was running late because he was having car trouble. Annie brought Cataldo’s “boyfriend” Sean Hanson to the ring as a replacement. The Thunder Bay Glamazon, Melissa Coates, made her way to the ring with her pysically fit partner Trixxie Lynn. They basically took their time, stalling for Cataldo to arrive at the building. Just as Coates was introducing their special manager, Rick Cataldo showed up with horrible timing and spoiled the introduction of Tammy “Sunny” Sytch! I fast forwarded through a two-minute rant from Cataldo, and then watched Sunny bitch him out on the microphone – even dropping the F-bomb on him! Finally the match began, and Sean Hanson remained at ringside within touching distance of boyfriend Cataldo. Hanson ended up being a legal participant in the match, and had his shoulders pinned to the mat by Melissa Coates. Tammy Sytch congratulated Coates & Lynn, as they steam-roll towards the big Team Team Title Tournament.

SINGLES MATCH
Roxxie Cotton vs. Reyna Fire: NWS commissioner Gino Moore said that since Roxxie liked being in the ring so much she can wrestle twice tonight. That was okay with me since I have a huge crush on Roxxie Cotton. The match was cut very short after WSU champion Angel Orsini came in and attacked Rayna Fire, ramming the red head face first into a steel chair! Mercedes Martinez hit the ring and demanded that the WSU championship match get started immediately!

WSU CHAMPIONSHIP MATCH
Angel Orsini (c) vs. Mercedes Martinez: This bitter feud has come to a climax very quickly, after an epic “Falls Count Anywhere” match at Army of One. Oh my goodness, the commentary between Missy Hyatt and Steve Mack during this match was so frustrating. Mack brought up Big Van Vader and Missy asked “was that the guy who fell through the wall on live TV?” and Mack said “yes.” Then Mack brought up PN News, and stated that he went on to become Mantaur in the WWF. Aaaahhhhhhhhhh…. I would expect that confusion from Hyatt but I hope and pray that Mack wasn’t that stupid. I’ll assume he was ribbing her. The match ended in a 15:00 time limit draw. Where on this planet does a wrestling promoter set a 15:00 time limit on a main event championship match? Well the fans wanted five more minutes, and the Commissioner gave it to them! But even after the five extra minutes there was no winner, so the feud continues…..