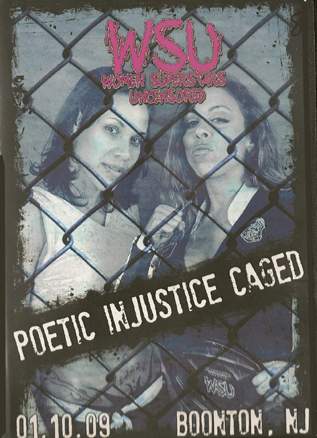 SINGLES MATCH
Melissa Coates vs. Reyna Fire w/Brooke Carter: Missy Hyatt & WSU legend Alicia were back on commentary for the second DVD in a row. The Thunder Bay Glamazon, Melissa Coates, was looking for a decisive victory after leaving the previous DVD with a disappointing draw against rookie Miss April. Melissa used her experience advantage to score a solid victory over the red-headed Reyna Fire. Drop-dead gorgeous Brooke Carter with a perfect tan at ringside did not play a part in the match. They beat around the bush, but did not mention Melissa’s absent tag team partner Trixxie Lynn.

SINGLES REMATCH
Rain vs. Rachel Summerlyn: The heat-magnet Rain hit the ring for a scheduled rematch against the death-match diva Rachel Summerlyn. On the previous DVD, Rain scored an aggressive victory over the pink Texan with unlimited assets, but Summerlyn was now seeking revenge! Missy Hyatt must have some real life heat with Rain, because she repeatedly brought up some private dirt that has nothing to do with WSU. Near the end of the match, it started to get a little strong-style in there, which is to Summerlyn’s advantage. Rain, however, proved that brains were more valuable than brawn and scored yet another pinfall victory over Rachel Summerlyn.

IN THE RING: Sean Hansen hit the ring and had something important to say. Hansen plugged the second year anniversary show in April. Hansen also announced that WSU would be opening a Hall of Fame. Hensen revealed the first inductee into the WSU Hall of Fame would be Missy Hyatt! Missy stood up from the announce table wearing a massive fur coat that looked like it was skinned from the Big Foot himself. Hansen they got super excited as he announced that he got Rick Cataldo reinstated in WSU and said there was going to be a party at Ref Hansen’s place tonight! I’m not too thrilled with that announcement..

SINGLES MATCH
Jana vs. Brooke Carter w/Reyna Fire: Brooke and Reyna have been inseparable lately and that will make them a force in the tag team division. Brooke Carter pinned Jana during a tag team match on the previous DVD, but Jana was not in the right frame of mind during that match. Missy and Alicia keep talking about the creepy stalkers that Brooke Carter attracts. If she ever turns heel, she should use the song “make a grown man cry” as her entrance music. Jana has some wild out-of-control hair! Having just turned heel, Jana should have destroyed Brooke, but they worked a very competitive match to make the rookie look good. Jana eventually forced Brooke to tap out with a submission, and refused to break the hold! Reyna Fire tried to break it up but Jana started to beat the crap out of her too! Latasha showed up swinging a chair and chased Jana out of the ring. Latasha said she just got back from the hospital and it turns out she is not pregnant. Latasha challenged Jana to a match on March 7th!

WSU TAG TEAM TITLE 4-WAY MATCH
Primetime Amy Lee & Taylor Wilde vs. Team Wigwam (Missy Sampson & Alere Little Feather) vs. Kylie Pierce & Lea Morrison vs. The Beatdown Betties (Roxxie Cotton & Annie Social): New WSU tag team champions Amy Lee and TNA Knockout Taylor Wilde were scheduled to defend the titles against Lee’s best friends Missy Sampson and Alere Little Feather in a regular tag team match. The Beatdown Betties (former champions) and Pierce/Morrison wanted into the match as well, so Amy Lee proposed a fourway for the titles! Lee, Wilde, Sampson, and Little Feather joined forces to issue a pre-emptive beating on the four heels. Of course I cannot pass up an opportunity to profess my love for Roxxie Cotton. She’s the best. Late in the match, Rick Cataldo jumped out of his front row seat and went after Annie Social. Cataldo tried to knock out Social with a belt-shot, but missed and inadvertently whacked Amy Lee! Cataldo and Annie pinned Amy at the same time to win the WSU Tag Team titles for the Beatdown Betties! Both Cataldo and Social claimed half of the titles, while cutie pie Roxxie Cotton looked around conflicted. Cataldo, who looks like a gay Bushwhacker, challenged Social to a Battle of the Betties match for the other half of the tag team championship.

STEEL CAGE MATCH FOR THE WSU CHAMPIONSHIP
Angel Orsini (c) vs. Mercedes Martinez: This is the SuperBowl for Women Superstars Uncensored. They have been building towards this epic battle for months, and it was finally time for former friends, Angel and Mercedes, to go to war inside the unforgiving steel cage! After a brief fist-fight at the beginning of the match, they settled into a methodical wrestling match to feel each other out. Soon after, Martinez became the first to try to escape the cage, but was stopped by the outside influence of Kylie Pierce and Lea Morrison of all people. Missy Sampson and Alere Little Feather showed up to take out Pierce and Morrison while Martinez and Orsini bounced each other’s heads off the top of the cage! Soon after, blood started to trickle from the forehead of Angel Orsini. The fight continued, and Mercedes Martinez had the gold in her sights. Martinez climbed the cage but found Rain guarding the floor. Angel went over and kicked the cage door, which smashed the referee and knocked him out on the floor! Martinez leaped off the top of the cage on top of Orsini and the referee, who took Mercedes’ knee to the head! I wouldn’t be surprised if Mercedes injured he knee on that guys head! The fight continued, and a minute later Angel and Mercedes both started to climb the cage. Martinez knocked Orsini down and successfully scaled the cage and hit the floor! Rain quickly put the boots to Martinez and pushed her back into the cage through the door while both referees were out cold and not paying attention. Alicia was very critical of the referees not doing their jobs. So the fight continued once more. Martinez tried to escape again through the door, but Rain smashed her on the head with the cage door! Rain tossed a pair of hand-cuffs into the cage. Orsini hand-cuffed Martinez to the ropes and slithered out the door where the groggy referee declared her the winner and gave her the WSU championship! Missy Hyatt called Rain a “dirty whore!” as Rain jumped into the cage and stomped the fallen Martinez. Orsini joined in the assault until the lights went out for an awkward thirty-or-so seconds. When the lights were restored the legendary Jacqueline (TNA’s Jackie Moore) was standing in the middle of the cage! Jacqueline announced Angel Orsini vs. Mercedes Martinez in a Bull-rope Match on March 7th with Alicia as the guest referee…. During a backstage promo, Angel Orsini agreed to the match but only if Mercedes Martinez put her hair on the line in return.. In another part of the building, Mercedes accepted the hair stipulation, but said he hair wasn’t going anywhere!