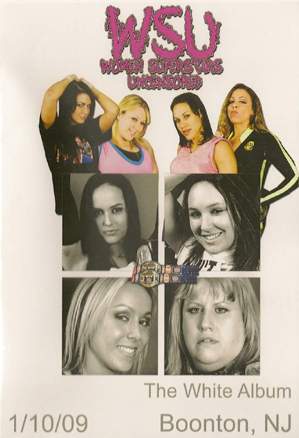 IN THE RING: Since Sean Hansen has become an on-screen character, fighting the good fight against sexism in WSU, the announce booth has been feminized by Missy Hyatt and WSU legend Alicia. Hansen came out to kick off the show and said he was going on strike and leaving the building to go talk to his lawyers.

SINGLES MATCH
Melissa Coates vs. Miss April: Commentators Missy and Alicia were really laying the praise on thick for rookie Miss April. She’s a little hottie with unlimited potential and obvious desire to be taken seriously as a legit pro-wrestler. The Thunder Bay Glamazon, Melissa Coates, could probably eat April for lunch and spend the rest of the day burning off the calories in the gym. April showed some babyface fire, and refused to go down without a fight. Melissa brushed off most of April’s offense, and bumped the rookie with bone-crunching force! April kept coming back, only for Melissa to pound her down to the mat once more. Things broke down and the girls started to fight until time ran out and the match was ruled a draw. After the match, Rain made her official debut with WSU and viciously attacked Miss April! Melissa Coates did nothing to help…

TAG TEAM MATCH
Team Wigwam (Alere Little Feather & Missy Sampson) vs. Kylie Pierce & Lea Morrison: This would be Little Feather’s return from injury after several months on the shelf. They say it was a neck injury but I’m not sure if that’s what the injury really was or if it was something else. I love the heck out of Alere Little Feather, but I don’t particularly care for Missy Sampson. Kylie Pierce is a great heel, but she needs to update her ring gear! Pierce introduced her mystery tag team partner, Lea Morrison – another young rookie (like Miss April) on the rise in WSU. That means the adorable Lea is now a less adorable heel. Good luck. Alere was threatening to break Pierce’s neck and get revenge for breaking her neck back in June. The match ended after Pierce scored a really sloppy pinfall over Little Feather. The only thing sloppier than the finish of this match was Missy and Alicia on commentary. Somebody forgot to tell them what was going on with the storyline..

SINGLES MATCH
Rain vs. Rachel Summerlyn: Missy Hyatt decided to bring up some real life dirt about Rain which had nothing to do with WSU and turned out to be wrong anyway. Rachel Summerlyn is a hardcore Texas blonde with a big pink booty also making her debut with WSU. Rain won the match, her first match appearance with WSU, and is being built up to be a top heel in the company! Rain pounded on Summerlyn after the match…..

MISSY’S MANOR (Part 2)
Missy Hyatt & The Soul Sisters (Jana & Latasha): Next up, Missy Hyatt introduced the Soul Sisters. Latasha came out dancing and goofing off while Jana looked more serious like she had something on her mind. Latasha said 2009 was the year for them to get the WSU Tag Team titles. Jana said they were having problems but they didn’t have time to talk about it because Latasha was late getting to the building..

TAG TEAM MATCH
The Soul Sisters (Jana & Latasha) vs. Reyna Fire & Brooke Carter: Clearly there was some unresolved issues between the Soul Sisters that won’t help them as they go into competition with a couple of young upstarts eager to climb the ladder of success in WSU. Reyna Fire is exactly what you imagine – a spicy red-headed vixen. The tiny spitfire Brooke Carter is blonde on the outside and green on the inside, but she has endless qualities. Latasha wanted to dance before the match, but Jana was all-business and immediately took the fight to her opponents. After a while, when Jana needed a break, she tried to tag out but Latasha dropped off the apron and said “I can’t! Just take care of them!” Jana was too exhausted to keep up her defenses, and was finished off by Brooke Carter with a stiff finish.

IN THE RING
Jana & Latasha: Latasha got in the ring and stood over Jana, who was a little groggy from being dropped on her head by Brooke Carter. Latasha grabbed the microphone and started to explain herself to Jana. Latasha revealed that she was pregnant! And that is why she couldn’t tag into the match. Once she cleared the cobwebs, Jana gave her partner a hug but then clotheslined her down to the mat! Jana then jumped off the top rope onto Latasha and started stomping her on the stomach! Kinda tasteless but it’s a good way to get some heat on Jana and generate some sympathy for Latasha, who has been a less than mediocre character at best thus far.

IN-RING INTERVIEW
Alicia & Cindy Rogers + WSU champion Angel Orsini: Alicia got rid of her blonde hair and now has dark hair like Dawn Marie (coincidence). Alicia introduced Cindy Rogers, who said she was not going to be wrestling tonight as she had previously planned. Roger said she would be back for the anniversary show and was challenging whoever the champion is to a title match! Rogers said she would sit in the front row and watch the steel cage match tonight! WSU champion Angel Orsini came out and said nobody cares about Cindy Rogers. Orsini said everybody came to see Orsini vs. Martinez in a steel cage match. Rogers fired back and promised to take the WSU title. Rogers has really been working on her promo skills during her time off.

IN-RING INTERVIEW
Alicia & WSU champion Angel Orsini: Cindy Rogers left and Alicia took control of the interview again. Alicia presented Angel Orsini with the brand new WSU championship belt. Orsini threw the old belt at Alicia (a former champion) and said nobody worth a damn held that title before her anyway. Angel started ranting on the microphone insulting the fans and hyping the steel cage match… Angel briefly broke character and thanked the fans for coming out to watch the steel cage match even though there was a snow storm going on outside…

WSU TAG TEAM TITLE MATCH
The Beatdown Betties (Roxxie Cotton & Annie Social) vs. Primetime Amy Lee & Taylor Wilde (sub for Awesome Kong): During a pre-match backstage segment, Amy Lee cut a raunchy promo on TNA’s Awesome Kong for no-showing and threatened to destroy Kong when she comes back to WSU. In reality, Kong had a back injury so TNA sent a suitable replacement.. When she got to the ring, Amy Lee introduced Kong’s replacement… TNA Knockout Taylor Wilde! Amy Lee & Taylor Wilde defeated the Beatdown Betties in about one minute to capture the WSU Tag Team titles!! Totally shocking!!