WSU The Show Must Go On (DVD Review) 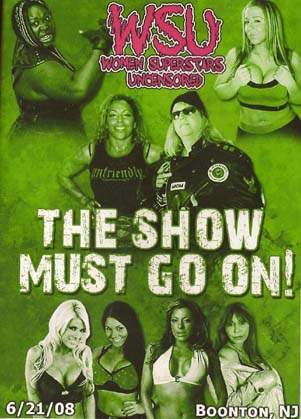 “THE SHOW MUST GO ON”

KICKOFF
“Primetime” Amy Lee: The live portion of this, the latest WSU DVD home release, began with a “thanks for coming out to the show” speech from everybody’s favorite mother trucker, Ms. Amy Lee. To my surprise, she actually sounded like a real person at first, but then turned on the gimmick and began tossing out threats with her trademark filthy mouth. Lee insulted pretty much every member of the front row individually, which I find to be a strange way of showing her appreciation. Lee expressed her desire to beat Angel Orsini for the WSU championship tonight, and also promised to kick the sh*t out of Awesome Kong. This event took place in a new venue, which had some unique characteristics, including a big hole in the floor right next to the ring – which was a major occupational hazard if you ask me. As usual, the line-up for this show was solid and the girls were ready, willing, and able to put on the best possible show for the live audience, and the fans at home who are intelligent enough to buy the DVD’s at DOIVideo.com!

SINGLES MATCH
Mercedes Martinez vs. Kacee Carlisle: Kacee Carlisle is a new-comer to WSU, but managed to fit in nicely with the established talent on the roster. There was no way that Mercedes Martinez, one of the top women’s wrestlers in the world, was going to let a disrespectful rookie walk in and use her as a stepping stone to greatness. Martinez is playing the babyface at this point, which is easy for her because she has a beautiful smile. On the other hand, she also has a frightening scowl that makes her a good heel too. Martinez wins after a weak finishing move, and then proclaimed that the match was “too easy!”

SINGLES MATCH
Angelina Love vs. Portia Perez: The cute little Canadian heel wearing pink and black debuts with WSU against TNA Wrestling’s Angelina Love, also making her first appearance with WSU. Love was greeted by chants of “we’re not worthy!” and Love obviously agreed with that sentiment. Love made friends quickly by stating that there wasn’t enough paper bags in the world to cover the fans in attendance tonight. While Portia is a heel almost everywhere she goes, she became the babyface by default against one half of the self proclaimed Beautiful People. Keep your pants on boys, Velvet Sky was not with Angelina on this night. In true heel fashion, Angelina scored the 1-2-3 while pulling on the back of young Portia’s tights. Backstage, Portia Perez cut a promo calling Angelina a cheater and declared that things were not over between them. Rematch!

MISSY’S MANOR
Missy Hyatt + Becky Bayless: Missy’s Manor is only slightly less annoying than Karen’s Angle from TNA. At least Missy prefers to do it in the ring. The walking riot, Missy Hyatt, brought a pillow case to the ring and pulled out two championship belts. She announced that they would be crowning the first ever WSU tag team champions next month. Cool! Missy called out bubbly Becky Bayless, who stole a fans cowboy hat on her way out – which is okay because it looked way better on her anyway. Becky insulted Missy and all her “75 years of wrestling experience.” It was sort of obvious that most of this segment was not scripted, because it was a little bit of a train wreck. All I know is that something was said about Dawn Marie, who is scheduled to face Bayless in the semi main event.

3-WAY TAG TEAM MATCH
The Beatdown Betties (Rick Cataldo & Roxxi Cotton) vs. The Soul Sisters (Latasha & Jana) vs. Missy Sampson & Alere Little Feather: During the pre-match promos, Missy Sampson disciplined her partner for stealing Amy Lee’s flask and told her not to drink before or during their match tonight, but they can party as much as they want after the match. Now we have to wait and see how the “drunken Indian” can compete without alcohol in her system. I think Little Feather has the potential to be one of the best if she really wanted to be the best. Alere is one flavor that TNA has yet to explore (just throwing that out there!). While I still believe Rick Cataldo is a waste of space, time and money, I have been warming up to little miss Roxxi Cotton recently – except when she talks. The participants of this match were put to the test after the bottom rope snapped and the girls (plus Rick) had to be even more aware of their surroundings. Through some kind of miracle, the Beatdown Betties managed to win the match and basically steal a victory. Please God, do not make them the first WSU tag team champions. After the match, Awesome Kong walked to the ring like a menacing gorilla and back-fisted Roxxi Cotton into oblivion! I’d like to go on record as saying Roxxi is cute as a button, and even moreso when she is unconscious.

SINGLES MATCH
Awesome Kong vs. Cindy Rogers: The traditionally heel Cindy Rogers played the part of fan-favorite in this desperate fight for her own life. Awesome Kong proved to be too hungry, and for the most part, ate Cindy Rogers for dinner. What’s for dessert?

IN THE RING
Sean Hanson: Before the next match, commentator Sean Hanson came out to announce the mystery wrestler who was “returning to WSU” after a six month hiatus. Everyone knew that it was Alicia, but the announcement was interrupted by the appearance of Kylie Pierce. Hanson, who is actually quite entertaining, took a fit and stormed off, but not after proclaiming out loud, “this is worse than f’ing ROH!” Ohhhhhhh! Them’s fightin’ words.

SINGLES MATCH
Kylie Pierce vs. Lea Morrison: Kylie Pierce is a natural heel, and was quick to tell everybody about all the “cards and letters” she has received from fans begging her to return to WSU. She even claimed fans were sending her pictures of them crying over her inactivity. Kylie said that WSU needs her, and that she was going after the WSU championship. Kylie’s opponent was a rookie from Boston, Massachusetts named Lea Morrison. Lea was wearing pink and black, which got me thinking about her possibly teaming with Portia Perez in the developing tag team division. This was the first step in what I would assume is Kylie Pierce’s big push in WSU. I have no problem with that. Kylie wins! Kylie wins! Kylie wins!!

IN THE RING
WSU Legend Alicia: After the last match, the REAL surprise finally showed up. Alicia was on summer break from college to confront Kylie Pierce for “talking sh*t” about her. Kylie challenged Alicia, and they briefly grappled before Alicia tossed Kylie out of the ring. Alicia made it clear that she was not back to wrestle, stating that she was getting too old (21 now). Alicia praised the WSU, the wrestlers, and the fans – asking them to continue supporting WSU. Thanks, I will.

SINGLES MATCH
Becky Bayless w/Angelina Love vs. Dawn Marie w/Missy Hyatt: Get the fire extinguisher, because Becky Bayless was on fire! Not literally, she’s just insanely hot. Bayless brought out Angelina Love to counter Missy Hyatt’s outside influences. For some reason Angelina came out to Enter Sandman by Metallica. I’m surprised Missy Hyatt didn’t try to light a cigarette for her. Dawn Marie was never known for being a wrestler, so it is interesting that she would choose to dive into the active side of pro-wrestling at this point in her career. Bayless defeated Dawn Marie by disqualification on the previous DVD (Women’s J-Cup), and this time around Bayless scored a victory by count out! After the match, Bayless and Love double-teamed Dawn Marie until Portia Perez made the save! Where the hell was Missy Hyatt? It looks like they are setting up Dawn/Perez vs. Bayless/Love for the next DVD.

WSU CHAMPIONSHIP MATCH
Angel Orsini (Champion) vs. “Primetime” Amy Lee: In a pre-match backstage segment, Amy Lee cut one of her famous profanity-laced promos that make me dislike her so much. This is Women Superstars Uncensored and they call it “uncensored” for a reason. Amy Lee was the unlikely babyface, and Angel Orsini was the heel WSU champion. Orsini makes the WSU belt look very sexy, but she sure looks like one tough b*tch. Orsini whacked Lee’s arm with a chair and aggressively focused on it for the rest of the match. Near the end of the match, Awesome Kong walked out and stepped into the ring. Kong tried to back-fist Orsini, but inadvertently knocked out Amy Lee! Angel Orsini covered Lee for the 1-2-3 to retain her championship. Orsini grabbed her belt and bolted, with Kong chasing her with chair in hand! In the ring, Amy Lee regained consciousness and asked for the microphone. Lord help us. Lee thought that Orsini enlisted the services of Kong to come to the ring to save her. Stay tuned for more WSU craziness.