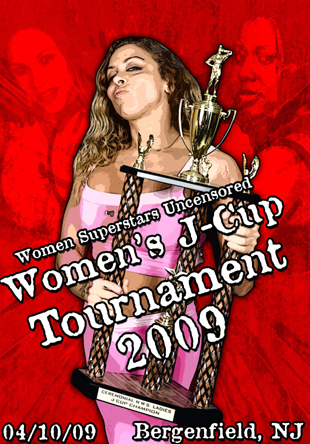 INTRODUCTION: The show started with an in-ring appearance by WSU Hall of Famer and WSU one-night-only commissioner Missy Hyatt. Thankfully her speech was kept short, and it was followed by the introduction of all eight participants of this year’s Women’s J-Cup tournament; Angel Orsini, Annie Social; Trixxie Lynn, Jennifer Cruz, Miss April, Roxxie Cotton, Rain, and Brooke Carter. They also hyped the WSU title match between champion Mercedes Martinez and Jana. Somebody in production wasn’t using their brain, because they listed the second round matches and finals on the back of the DVD case, so you knew who would make it to the finals before you even popped the DVD into your player. In addition to that, if you look at who is holding the trophy on the front cover, you know who won the tournament. Spoiler alert.

WOMEN’S J-CUP 1st ROUND MATCH
Angel Orsini vs. Annie Social: Angel Orsini was wearing some bright pink ring gear, which looked strange on her for some reason. Annie Social’s white crop-top could barely hold her beautiful enormous breasts. Ahem, where was I? It was quite a competitive match-up, but Orsini won with a modified Oklahoma Roll! It’s a miracle that Annie’s breasts didn’t fall out. She must buy a lot of double-sided tape. After the match, the irritating Rick Cataldo showed up wearing a leopard-skin robe and within five seconds he was jumping up and down on my last nerve. He said something to Annie Social, but I couldn’t quite make it out – and I was somewhat grateful for that. Annie jumped out of the ring and chased Cataldo around the ring..

WOMEN’S J-CUP 1st ROUND MATCH
Trixxie Lynn vs. Jennifer Cruz: Trixxie Lynn is looking a little less brawn, and a little more beauty these days, as she has transitioned from babyface to heel in WSU. She seems to be calling out WSU’s resident motor-mouth, Primetime Amy Lee. Her first round opponent was newcomer Jennifer Cruz, and it didn’t take long for Trixxie to get past her and move on to the next round..

WOMEN’S J-CUP 1st ROUND MATCH
Miss April vs. Roxxie Cotton: My favorite dazed and confused 80’s Diva, Roxxie Cotton, went up against WSU tag team champion Miss April in the final match of the first round. I like everything about Roxxie, and I’m still waiting for her to email me. Miss April is the typical hottie babyface that the fans can really get behind. April also just signed a developmental contract with the WWE. Good for her! If you saw this contest, you’d wonder why Roxxie didn’t get a WWE contract, because she carried the match. Despite that fact, it was still Miss April who scored what I consider am upset victory over the 80’s princess. After the match, Rick Cataldo made another appearance – taking the opportunity to take some shots at Roxxie while she was down until Annie Social hit the ring and bashed Cataldo! Roxxie joined in and Cataldo found himself on the wrong end of a double-bitch beating!

WOMEN’S J-CUP 2nd ROUND MATCH
Angel Orsini vs. Trixxie Lynn: Angel Orsini was fighting for the right to face her current best friend, Rain, in the finals, but Trixxie Lynn was trying her best to prevent that from happening. Unfortunately nothing could stop Angel on her way to the finals of the J-Cup tournament!

BONUS MATCH
The Giant Silva vs. four jobbers: This was just filler stuff for the DVD, but they brought out “former WWE Superstar” Giant Silva. I’m sure some people looked at him and said “Giant who?” and assumed they were looking at the Great Khali’s long lost brother or something. So here is a history lesson for you young fans out there; it was the 1998 and while Superstars like the Rock, Stone Cold, and Mankind were working their butts off to earn the WWE’s greatest ratings of all-time, there was a small group of Oddities working to kill the ratings. The group consisted of such distinguished wrestlers as Giant Silva, Kurrgan, Golga (John Tenta), the Insane Clown Posse, and Luna Vachon. It was terrible. So ten years later, the NWS (WSU’s big brother) is trying to capitalize on the Giant Silva’s so-called stardom with a weird 4-on-1 handicap match where the Giant’s opponents have to capture him in a net to win the match. The four opponents were quite the “inspiration” – as they were living, breathing, proof that anybody (and I mean, ANYBODY) can become a wrestler. You can probably guess how everything turned out.

WOMEN’S J-CUP FINALS
Angel Orsini vs. Rain: For some unknown reason, Angel Orsini (aka the Pink Power-Ranger) came out slapping hands with the fans, taking somewhat of a babyface role against the heel Rain. Orsini was trying to win her second straight Women’s J-Cup tournament, but Rain desperately wanted to claim the prize for herself. These two partners in crime fought hard for the very prestigious trophy. They went back and forth for about fifteen minutes before Orsini planted Rain with her finisher to become the 2009 Women’s J-Cup tournament winner!!! Angel was presented with the J-Cup trophy (shouldn’t it be a cup?) and cut a babyface promo while surrounded by all the other participants of the tournament. Angel praised Rain as a worthy competitor. Rain was the only WSU employee to stay in character. Rain said she had a deal with Angel and was supposed to get WSU title match before Angel lost it! Angel said she won the J-Cup and she earned her title shot fair and square. WSU champion Mercedes Martinez showed up and offered to defend the WSU title against both women in a triple threat the following night at the King & Queen of the Ring event.. but this event ended with a big brawl between Martinez, Orsini, and Rain!!