The History of the WSU Title: Volume 2 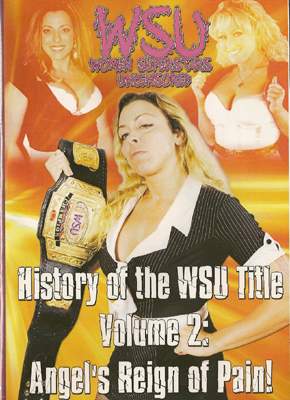 “HISTORY OF THE WSU TITLE “

WSU CHAMPIONSHIP MATCH (JAPW – 5/31)
Nikki Roxx vs. Angel Orsini: This is the match where Angel Orsini captured the WSU championship. It’s weird to see Nikki Roxx wrestle as “Nikki Roxx” but still using her Roxxi TNA gimmick. Everybody knows Roxx is tough as nails, so she was a great physical opponent for Angel Orsini. This WSU title match was part of a JAPW DVD called “Full Force,” and Sean Hansen joined the JAPW announce team to provide his insight into the WSU product. You haven’t heard funny commentary until you’ve heard J-Train (aka Julius Smokes) call a women’s wrestling match. Nikki did the right thing and congratulated Angel after the match, but Angel quickly turned and knocked Roxx out with her newly won WSU championship belt! Amy Lee & Missy Sampson made the save, but Angel showed how much she cared by yelling “whatever!” at them!

WSU CHAMPIONSHIP MATCH (WSU – 6/21)
Angel Orsini vs. Mercedes Martinez: These two tough cookies have been allies in the past, teaming up on more than one occasion to take on a common enemy. They put their friendship aside tonight to fight for the WSU championship. It started out as a genuine technical tour de force until the battle spilled outside the squared circle and traveled throughout the entire building. They tussled up and down, from side to side, and ended up on an elevated platform. Mercedes launched Angel off of one balcony down onto another just below! They continued to brawl until they were getting closer to the ring, when Orsini did the unthinkable and faked an injury to gain sympathy from her friend. Orsini waited for the right moment and rolled up Martinez on the floor for the 1-2-3 to retain her WSU title in an act of total desperation. Martinez was clearly offended by the betrayal and this ignited a bitter feud which would last until the end of the year and beyond.

WSU CHAMPIONSHIP MATCH (JAPW – 6/28)
Angel Orsini vs. Jana: Angel Orsini had solidified her position as the dominant WSU champion, taking on all comers in some of the most brutal women’s matches in WSU history. To me, Jana is nothing more than a solid mid-carder at this point in her career, but I have no problem with her challenging for the WSU championship once. It actually forced Jana to take her game up a few extra notches to compete at the next level. Good match.

WSU CHAMPIONSHIP MATCH (JAPW – 8/16)
Angel Orsini vs. Roxxie Cotton vs. Annie Social vs. Rick Cataldo: I am speaking from experience when I say that the Beatdown Betties (Rick Cataldo, Roxxie Cotton, and Annie Social) are an acquired taste. Over time I developed great respect for Annie Social, and fell in love with Roxxie Cotton. However, I still have an extreme hate for the homosexual male wrestler Rick Cataldo. He does not belong in the wrestling business. Cataldo’s strategy was for Annie and Roxxie to help him win the WSU title, but the girls wanted to get their hands on the WSU gold too. Roxxie is so adorable. Annie is kinda scary, but I like her ring gear (or lack therefore of). It started out as your basic three-on-one assault before the Beatdown Betties alliance fell apart. While the Betties fought with each other, Angel Orsini slid a table into the ring. Roxxie and Annie started hair-pulling at ringside. Meanwhile, Orsini speared Rick Cataldo (with his pants down) through a table in the corner for the win! Goofy match. Roxxie and Annie bickered with each other backstage after the match, while Cataldo was shown crying in the bushes because his “boyfriend” referee Hansen did not count the 1-2-3 for him.

WSU CHAMPIONSHIP MATCH (WSU – 8/22)
Angel Orsini vs. Portia Perez vs. Dawn Marie: What a strange combination of skill and personality. Angel is tough and aggressive. Dawn is glamorous and whiney. Portia is young and feisty – not to mention Canadian! After some title action, Dawn Marie scored a pinfall, but Orsini’s feet were on the ropes. Another referee ran out and screamed at the original referee, which must be part of some unexplained local storyline. Commissioner Gino Moore came out and said some stuff on the microphone but commentators Sean Hansen and Missy Hyatt wouldn’t stop talking over him. Gino restarted the match, much to the dismay of the pouting Dawn Marie. Portia Perez turned on Dawn and kicked her in the gut, but Angel took advantage and put Portia away to retain her WSU championship!

WSU CHAMPIONSHIP MATCH (JAPW – 9/20)
Angel Orsini vs. Annie Social w/Roxxie Cotton: Annie Social was determined not to let “two morons” get in the way of her winning the WSU title. Despite this proclamation, Annie was accompanied to the ring by the adorably irritating Roxxie Cotton. I think Roxxie was trying to mend fences with her partner after they fell on hard times during their previous attempt at winning the WSU title from Angel Orsini. Annie was very aggressive throughout the match, but lost focus later on when she got distracted by her Betties partner on the floor. After the match, TNA’s Rhino showed up and GORed the crap out of Roxxie Cotton! I give Roxxie top marks for taking the full brunt of the GORe! Annie Social didn’t seem to care, and was happy to leave the scene of the crime with Rhino!

WSU CHAMPIONSHIP MATCH (NWS – 10/4)
Angel Orsini vs. Kara “Cherry” Slice: This WSU title match took place in Brick, NJ featured WSU champion Angel Orsini wrestling former WWE Diva Cherry, known on the independent circuit as Kara Slice. Cherry is so transparently sweet. She was far too sweet to survive in the WWE. I would love to be her friend. Angel protested having to defend her championship against a “nobody,” asking “who are you?” The crowd really loved Cherry, and this just made Angel even madder. A few minutes later, the referee got bumped and Cherry made Angel tap out with a submission hold – but there was no referee to end the match. Orsini got up and knocked Cherry out with a belt-shot and made the cover just as the referee started to wake up. Three seconds later and Orsini was parading around the ring with her WSU championship in tact! The stunned Cherry couldn’t do anything about it.

WSU CHAMPIONSHIP MATCH (JAPW – 10/18)
Angel Orsini vs. Primetime Amy Lee: I can’t stand Amy Lee, so it’s hard for me to give her matches a positive review. Although it has happened once or twice – usually when facing Amazing Kong. Unfortunately, I’m just not a fan of Primetime Amy Lee. The WSU fan-base supported her in her quest to dethrone Angel Orsini as WSU champion. This match was turned into a No Rules match, which conveniently masked the challenger’s lack of wrestling skill. Angel used a fist wrapped with a chain to knock Amy Lee out cold on her way to yet another successful title defense in WSU.

WSU CHAMPIONSHIP MATCH (FTW – 10/25)
Angel Orsini vs. Valentina: Valentina is the blonde girl from Wrestling Society X who went by the name Lizzy Valentine. It looks like Valintine has been taking some wrestling lessons. Apparently she has been improving her skills in Mexico. She sorta kinda a little bit just a tad reminds me of Lacey. Angel felt that poor Lizzy was beneath her, so she really put a beating on the irritating blonde heel. I was impressed with Valentina, mostly because I had a very low opinion of her before. Angel Orsini’s reign as WSU champion continues!

CONCLUSION: Even if you purchase all of the WSU DVD’s, you will still enjoy this DVD. Since most of these matches were taped in different promotions, this is a good way to fill in the blanks of the Angel Orsini reign on top of Women Superstars Uncensored.