History of the TLC Match 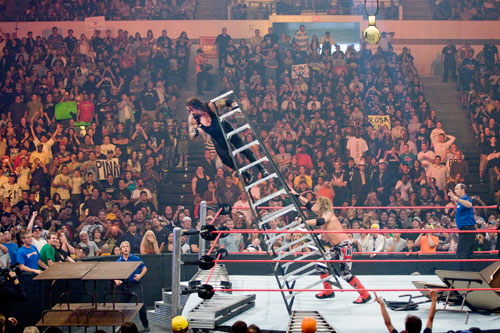 The TLC match is a variation of a ladder match, which is modified to co-emphasize two other weapons: tables and chairs. The goal is to acquire the item (usually championship belts) which starts the match suspended above the ring. A TLC match can be seen as a more complicated ladder match, where tables and chairs, along with ladders, can also be used as legal foreign objects. As the match concept was originally conceptualized around the tag teams of the Dudley Boyz, the Hardy Boyz, and Edge and Christian, the particular weapons of tables, ladders and chairs were, respectively, seen as unique to each team’s style. The Hardy’s were seen as high-flying daredevils, and a key element to the Dudley Boyz gimmick was their flagrant use of tables as weapons. Edge and Christian became notable for using steel chairs in tandem against opponents. (Courtesy of Wikipedia.com)