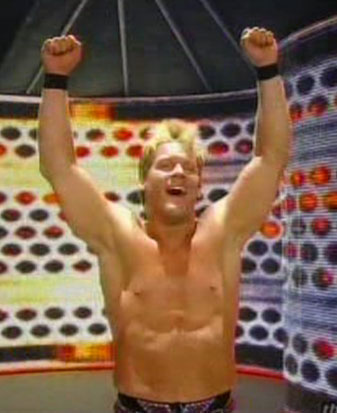 Chris Jericho Addresses Rumors Of WWE Departure This Fall, Discusses Fozzy’s Canadian & UK Tours/The Release Of “Chasing The Grail,” The Band Being Embraced By Their Peers In The Music Industry, His SummerSlam Tag Team Elimination Match (Team WWE vs. The Nexus) & What To Expect From Bret “The Hitman” Hart’s In-Ring Return, Why The Nexus Have Generated Buzz/Intrigue (And The Comparisons They Have Received To The nWo), The Evolution/Growth Of Wade Barrett (And Why Barrett Would Have Been A Star In The WWE Whether Or Not The Nexus Was Created), The Release Of His Forthcoming DVD (“Breaking The Code: Behind the Walls Of Chris Jericho”), The Next Season Of ABC’s “Downfall,” Why He Sees TNA As Being “A Vanity Project That’s Been Treading Water For The Last Four Years,” The Promotion’s “Horrendous” Booking, Why The HardCORE Justice could Spike Their PPV Buyrates, & Why Bringing In Tommy Dreamer Could Be Just What The Company Needs

Former six-time World Heavyweight Champion, WWE superstar, the lead singer of Fozzy, & the host of ABC’s Downfall, Chris Jericho, was one of the special guests on this week’s live edition (08/02/10) of the award-winning Monday Night Mayhem (presented by Good Health Natural Foods). You can feel The Mayhem live every Monday night (at 7PM ET/6PM CT), exclusively on The Monday Night Mayhem Radio Network (www.MondayNightMayhem.com).

Y2J joined The Big Mosh & “The Chairman of the Board” Todd Vincent for his return to “Your Home of Wrestling Radio” (to preview WWE’s SummerSlam PPV & Fozzy’s forthcoming Canadian tour next weekend in Toronto, Hamilton, & Windsor, Ontario), which is now available in Windows Streaming Media or via Monday Night Mayhem’s official Podcast on iTunes:

Interview highlights courtesy of The Mayhem’s official correspondent, Paterson from New Jersey:
What has been the most rewarding part of the release of Fozzy’s fourth album, Chasing the Grail and what it has been like for the band to be embraced band by their peers within the rock/metal scene & the music industry: “I think how the band started, it was a fun thing playing a lot of covers, and that’s how we were signed by the guy that signed Metallica & Anthrax. We really didn’t understand it, but we did it, and then to morph out of that into a “real band,” playing all original stuff, especially our last two records. Just to see the shift in attitudes from people who understands the band, it has become a viable, kick-ass rock n’ roll band with great songs. I think an example of the most rewarding part was when we played in BB Kings in New York; we had four-fifths of Anthrax there, Avenged Sevenfold joined us on stage, Vinnie Paul from Pantera was there. Just a huge cavalcade of guys from the business there, and it was just cool to say that we have respect from our peers, which is so important.”

His upcoming seven-on-seven Elimination Tag Team Match at SummerSlam (Team WWE vs. The Nexus), why the angle with The Nexus has generated so much positive buzz, & why he belives the fans have been intrigued thus far: “This match is cool, because obviously they created a great angle using guys who have never had matches on TV before basically, which I don’t think has ever been done before, and to have such a talked about storyline. Seven guys who have proved nothing as far as being main-event draws, but it goes to show that when you have a good storyline, a good idea, and promote it the right way. I’m just excited about it, and I’m happy about the storyline leading up to it. I think people are really intrigued by the whole situation, and that’s the best thing you could do, and to me, that’s the most important thing has always been the story. The match is important, but it’s the story that gets you there.”

The evolution & growth of Jericho’s rookie from NXT Season I Wade Barrett, why Chris knew that he saw himself with “the winner” as soon as they were paired up together, & why he would have been a great star in the WWE whether The Nexus was created or not: “There really hasn’t been much growth…he was good from the moment that he appeared. You could see his presence & his promo ability right off the bat was tremendous, his whole look & ambiance, so he was a star right off the bat, and as soon as I was paired up with him, I knew I was with the winner, because he’s got it more than these other guys do. Work wise, we really haven’t seen much from him. Is he a great worker? Is he a good worker? Does he suck? I don’t know, I think he’s a good worker and has room for improvement, and that’s because he doesn’t have a lot of experience in WWE arenas. But he, by far, is the most talented of the group, the biggest star of the group. Whether they created Nexus or not, he would have been a great star in the WWE. The only thing we need to work on with him is his actual matches, because we haven’t gotten to see much, except for a couple of three-minute matches. But other than that, I think he’s the total package of what we are looking for in the WWE at this point.”

The comparisons of The Nexus to the original NWO, along with the recycling of old angles in professional wrestling & sports-entertainment: “There’s only so many ideas you could think of, and there’s only so much talent out there. The bottom line is there’s so many new guys on the shows nowadays, so you have to use that to your advantage, or you have to go back to your old faithful. I don’t see this being the NWO, because the NWO wasn’t like this. The NWO began with three guys that were all World Champions and big huge stars. So you have Hall, Nash, & Hogan who everyone had known & seen before, and that was part of the shock. The Nexus, we don’t know any of these guys or seen any of them before. They have never drawn a dime anywhere, and that’s the difference. This pack that are working as a well-oiled machine that’s done nothing before…that’s the real surprise. As far as what TNA is doing with ECW, why not?

Why he sees TNA as being a “vanity project that’s been treading water for the last four years,” why he sees their booking being “horrendous,” why the HardCORE Justice could spike their PPV buyrates, & why bringing in Tommy Dreamer could be just what the company needs: They got nothing else going on, their booking is horrendous, and I say that with the utmost respect for those guys and I most desire to see them succeed, but it’s crap. You know it’s crap, they throw stuff up against the wall, and it’s so hard to watch when it doesn’t have to be. They’re doing 10,000 buys on Pay-Per-View, so let’s bring back The Sandman & Sabu, and maybe they could do 30,000 buys. Go for it; maybe they can do something out of it. Having a guy like Tommy Dreamer involved behind the scenes might be what they need. Get rid of the same old stuff that they have been doing over & over, and bring in someone with a new perspective, and maybe that will help them get their heads out of there asses and just making some money instead of doing this as sort of a vanity project that’s been treading water for the last four years.”

How Chris stays in shape with all of his WWE commitments, his duties as the host of ABC’s Downfall, Fozzy, & other projects: “Crystal Meth. No, I have a lot of drive & passion for the things that I do, and I don’t take on stuff that I can’t completely nail. I’m not as busy as I could be, I still turn down quite a lot of things. Obviously with the band I’ve been playing music a lot longer than I have been wrestling, so this is something I have always wanted to do. As far as the other things, Downfall was a huge opportunity for me, and I would be crazy not to do that. Am I busy sometimes? Yeah, but it all balances out, and when it’s my time off, it’s my time off.”

What does Chris have left to give to the wrestling industry if he decides to stay with the WWE when his contract expires this fall & his response to the Internet rumors that foresee him leaving World Wrestling Entertainmeny being a mere certainty: “Just keep giving what I’ve been giving for the last 20 years, which is performing at the highest level that I can, and I think the stuff I have been doing over the last three years is the best work of my career. So there’s no reason for me to walk away from the WWE at this point, because I think I could perform at the level I have been doing for the last three years because you can’t teach experience. The company has a great future ahead of it, and guys are starting to break through that I’m really proud of. A guy like me, who has been doing this for 20 (and I’m only 39 years old), I could keep doing this another five or six years if I want to, so when it’s time for me to walk away, I’ll know, but as for now, I still enjoy it. I love speculation…that’s what I love about the Internet. Somebody writes something, so it becomes the gospel truth and written in stone.”

More is contained in this Chris Jericho’s return to The Monday Night Mayhem Radio Network, including his thoughts/comments about Bret Hart‘s in-ring return to the WWE at SummerSlam (and teaming up with “The Hitman”), an in-depth look at Chris’ forthcoming DVD (Breaking the Code: Behind the Walls of Chris Jericho), whether he would consider booking after his career ends, which projects he would like to work on down the line, & more on the future of Fozzy (including more details on the upcoming Canadian & UK tours beginning next weekend and continuing later this fall). Ccongratulations to Graham Shaw from Toronto, Ontario, Canada, who won the experience of a lifetime: pair of tickets to see Fozzy LIVE at The Tattoo Rock Parlour in Toronto, Ontario, Canada this Friday with The Big Mosh & Todd Vincent. Purchase your copy of Fozzy’s Chasing the Grail right now at www.Amazon.com, iTunes, or your favorite music/retail store. To the Mayhem fans across the pond: Head on over to Fozzy’s official website & Facebook page (located respectively at www.FozzyRock.com & www.Facebook.com/FozzyRock) to find out where/when the guys are headed your way this October! As the road to SummerSlam counts down, stay in the loop with what’s going on in the life of the first-ever WWE Undisputed Champion: follow “The Ayatollah of Rock ‘n’ Rolla” on his official Twitter page (located at www.Twitter.com/IAmJericho).