By OWW Contributor on September 13, 2014@owwcom 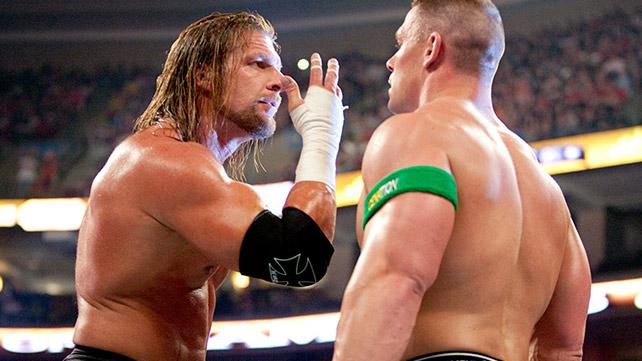 Think it’s easy being John Cena? Try holding onto your spot as the top star of the world’s biggest sports-entertainment company while Wrestling Machines, Cerebral Assassins and a certain Beast Incarnate try to knock you off your perch.

Check out our photo gallery of Cena’s greatest rivals

The Cenation leader has been nothing if not resilient in his time as “the man” in WWE, but that doesn’t mean he hasn’t been pushed to his limit (or, as may be the case with Brock Lesnar, far beyond it) by a rogues gallery that enjoyed nothing more than putting that “Never give up” catchphrase to the test.

Which of Cena’s rivals do we think have been his most worthy adversaries? Find out in our list that includes Triple H, Batista and, believe it or not, maybe even you.

We all know the story. A ferocious Olympic Gold Medalist issues an open challenge. A young bodybuilder with a truly awful crew-cut accepts. He flaunts his “ruthless aggression,” slaps the veteran across the face and ignites one of the era’s defining rivalries.

No one knew who John Cena was when he and Kurt Angle first squared off, but it was Angle who made Cena into the man he is today. The relentless Wrestling Machine followed young Cena wherever he went, pushing the upstart to his limit in the ring while forcing him to build his “Never Give Up” reputation. And it was Angle and his patented Ankle Lock that led Cena to adopt the STF in late 2005.

Watch Cena vs. Angle from Unforgiven 2005 on WWE Network

Their final singles encounter was a merciless First Blood Match on Raw just after New Year’s in 2006 that left both men in a messy heap. A fitting end to a rivalry built on “ruthless aggression.” — ZACH LINDER