Konnan talks about the Jericho incident 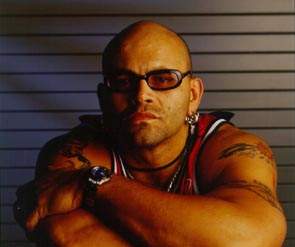 The award-winning Monday Night Mayhem (voted on by you, the fans as the “Show Of The Year” in the 2009 Wrestling Radio Awards), is also sponsored by: Old Time Wrestling (the official independent promotion of The Mayhem), The History Of WWE.com (celebrating seven+ years of bringing you the best in the illustrious history of our business), TicketRelief.com (the official online traffic school of The Mayhem), & Serenity’s Treasures: Purchase $50.00 or more through February 28th, and you will be eligible to win a collectible Budweiser beer stein/Budweiser baseball mug/Budweiser & Bud Light mini-mug shot glass set — a near $100.00 prize pack, courtesy of The Mayhem!)

Konnan’s fifth MNM appearance is now available for free in Windows Streaming Media, or via the official Monday Night Mayhem Podcast On ITunes:

Besides Konnan’s return to The Mayhem, get ready for the best & most-diverse lineup of the entire year, which featured a look back at some of the best moments & memories in The Mayhem’s seven years on the air, some surprise call-in’s from the best guests in MNM history (including: Eric Bischoff, Jason Hervey, Chavo “Classic” Guerrero Sr., Matt Morgan, & former WWE Head Of Security, Jimmy Noonan), in addition to Elijah Burke’s first post-WWE interview, plus so much more!

Here are some highlights of Konnan’s interview on the show, provided by The Mayhem’s correspondent, Dan Kriegbaum:

Konnan called into The Mayhem during the show’s final segment to wish The Big Mosh & Blade good luck in their future success after seven long years of wrestling radio. Mosh thanked Konnan on the kind words, as well as being one of the most-frequent guests in Mayhem history (going back to 2003 & the program’s days @ 91.3 FM WBNY), adding that Konnan has been one of the most straight-forward guys when it comes to setting the record straight.

As a way to “continue the trend,” The Big Mosh asked Konnan how he thinks the business has changed throughout The Mayhem’s on-air history, from 2002 until the present. Konnan said that wrestling has evolved in both the United States & Mexico over the past seven years, just like anything else has, naming television shows & electronic gadgets as two prime examples. He added that while wrestling has progressed & evolved, it also has taken a step back. “There is way too little wrestling, way too many skits, way too many people being brought up too early, when I broke in there was no way the Divas would be put on TV before they were ready. Now they’re just throwing people out there that aren’t ready which affects the match quality & the rhythm of the match.” He also agreed with something Kevin Nash said recently, in that when both of them started, the locker room was full of guys who had been wrestling for years who were just getting a big break — unlike now, where it is a majority of younger talent…some of which whom lack the proper respect.

The Mayhem Crew then asked Konnan for his thoughts on the recent Chris Jericho incident in Victoria, British Columbia, that has been picked up by various news outlets, where he allegedly punched a female fan. Konnan said it sounded pretty crazy, although he has not seen anything about it yet (at the time of his Mayhem appearance), as he just got back to the States from Mexico. He said it seemed uncharacteristic for Jericho to do what he did, but says that he knows Jericho puts up with a lot of stuff & must have been in a bad mood to even get out of the car, “knowing that in this day of cell phone cameras, video, & security cameras, that anything you do in public can be recorded, so I’m very surprised that he did that in public & did it at all.”

Mosh & Blade asked Konnan about how World Wrestling Entertainment is handling their current status with the Hispanic demographic & what lies ahead in the future leading into WrestleMania XXV. Konnan said that WWE has been doing awesome in Mexico, just like they have been everywhere else, with an “incredible live show” backed up by “incredible production.” Konnan said that the WWE even took over AAA’s timeslot through Televisa in Mexico, because Televisa thought the WWE would be the more-viewed show, even though AAA has been “winning in the ratings for the last month or month & a half.” Konnan said that they altered their product a little to compete, including more storylines & better production. He said that Rey Mysterio is a guy that Mexicans really get behind, which is due to the push, stating “if you’re a lower level or mid-card guy, they don’t really get behind you, no matter how many Mexican flags you wave.” He then named other superstars of Mexican decent, including Chavo Guerrero & the current WWE Women’s Champion, Melina, but said that they do not get that big of a reaction, mainly because they never wrestled there before the WWE like the other Guerreros & big Mexican stars.

More is contained in this near 20-minute exclusive interview with “The K-Dawg,” including: his current role in AAA, why wrestling is still so huge in Mexico, & some shout-outs to everybody involved in his career (including The LAX), to which he had to say “keep holding it down, in spite of all the crap you have to work with.”

The Big Mosh & Blade (on behalf of The Mayhem Crew past & present) would like to thank all of our fans across the world for your continued loyalty, support, & dedication to Monday Night Mayhem for seven+ years. More is in store for our new 2009 campaign. Think you’ve heard it all on “Your Home Of Wrestling Radio?” You’ve seen nothing yet!