Home / Columns / Luke and Butch: Before the Bushwhackers

Luke and Butch: Before the Bushwhackers 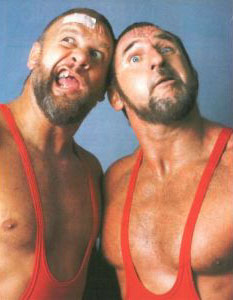 Luke and Butch: Before the Bushwhackers
Originally published on August 6, 2004
Written by Kevin G. Bufton

Many people consider the late eighties and early nineties to have been a Golden Age for tag team wrestling in the WWF. They talk about the likes of the Bulldogs, the Hart Foundation, Demolition, the Rockers and, to a lesser extent, Strike Force, High Energy and the Orient Express. Whilst I wouldn’t dispute this to any great extent, this was also the time of the Bolsheviks, the Powers of Pain, the Twin Towers, Colossal Connection and, perhaps the greatest steaming turd in the cesspool, the Bushwhackers.

The very name of this New Zealander team causes many die-hard wrestling fans to sweat in fear and trepidation. Respected members of the Internet Wrestling Community, including Scott Keith and Smash Wrestling’s Arnold Furious refuse to watch their matches during some of their PPV recaps. There must be a good reason for people so obsessively enamoured of wrestling to ignore more of their favourite sport, but were the Bushwhackers REALLY that bad” –  – – – Well…yes.

There can be no denying that the Bushwhackers were one of the worst teams on the WWF roster. That said, however abysmal they might have been, they were still over with the crowds and an integral part of the promotion’s relentless merchandising machine. Personally, I have always had something of a soft spot for the anitpodean idiots. Don’t get me wrong; I’m no fan of bad wrestling, in spite of how much of it I have seen but, having watched Luke and Butch in their prime, I can safely say that their apparent uselessness was not all their own fault.

Back in the days before the WWF money machine had rolled over them, the two cousins were one of the most brutal hardcore teams in the history of the sport. Remember those missing teeth, those cauliflower ears and their scars – those were the receipts of years of savage brawls with some of the greatest teams in the business. The team we saw squaring off against the Beverly Brothers and the Rougeaus were very much a watered down Sports Entertainment version of the real deal – the Sheepherders. 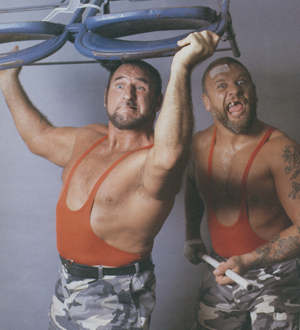 Born and raised in New Zealand, Luke and Butch became wrestlers because it was either that or boxing and the boxing scene in the country was almost non-existent at the time. They were classically trained wrestlers, working the less flamboyant European and British style during the time they spent in their homeland, never throwing so much as a punch or kick before they left the country. In New Zealand, they were known for being legitimate workhorses, regularly performing a singles match each on the card, before rounding it off with a 45 minute tag match in the main event.

Moving to Canada, they wrestled for both Grand Prix and Stampede, facing such legends of the game as the Vachon Brothers, the LeDuc Brothers, Dino Bravo, Killer Kowalski, Bruno Sammartino and, of course, the Hart family. After a year or so in Canada, they decided to move on, though the Harts had asked them not to. It says something of their talent that they were considered important attractions in a promotion that prided itself on the technical prowess of its workers.

Their first run in the US was in Portland, Oregon, facing more legendary workers, including Playboy Buddy Rose, Roddy Piper, Adrian Adonis and Rick Martel. Again, the promoter, Don Owen, didn’t want them to leave but, afraid of getting stale in the territorial system, Luke and Butch moved on after 15 months.

After another run in Stampede, where they held their own alongside Dynamite Kid and a very young Bret Hart, the Sheepherders moved to Japan, where they wrestled for AJPW, NJPW and Giant Baba’s Capitol. It was at this time, allegedly, that Butch Miller became the original Tiger Mask, some time before Sayama, who only got the gimmick after Butch didn’t return one of Antonio Inoki’s phone calls. I must admit that I have no idea if this story is true or not – perhaps there’s a puroresu fan out there who can clarify this. 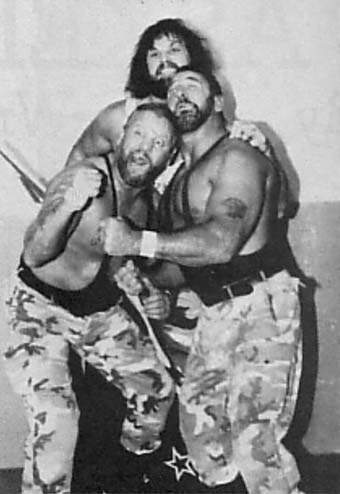 The Sheepherders had a brief tenure in Jim Crockett’s Mid-Atlantic promotion, before moving on to Puerto Rico, where the Sheepherders’ legacy really began. If you think Mick Foley invented hardcore, then you can’t have seen any matches from WWC or IWA-Puerto Rico. The Sheepherders were in their element in that brawling, bloody, hardcore style that was so popular in the Caribbean. They took part in barbed wire matches, Texas Death Matches and any number of extreme, gimmick-laden bouts with the likes of the Invaders, Abdullah the Butcher, Carlos Colon and the late, great Bruiser Brody, setting several attendances records for the area in the process.

As with many performers in the region, the Sheepherders were often under attack from the crowds, who hated to see their local heroes beaten and bloodied by the foreign wrestlers. Again, if you think the ECW crowds in Philly were aggressive, compared to Puerto Rico, they were merely a tad rambunctious. Luke and Butch were once barricaded in the locker room by the marauding fans, who then proceeded to set fire to it – now that’s extreme!

In Southwest Championship Wrestling, they wrestled some more wild brawls against the Drambuie Express, the Road Warriors and Dusty Rhodes and Blackjack Mulligan. However, their greatest in-ring performances occurred a little while later in Memphis, where they had a series of classic matches against the Fantastics, who very nearly got a five-star classic out of the Sheepherders.

Eventually, they moved to Florida, where they wrestled the likes of Lex Luger and Ron Simmons, before moving on to Bill Watts’ Mid-South promotion and another set of matches with the Fantastics. They also introduced New Zealand Bunkhouse matches to the region, which were more or less like street fight/hardcore matches. As with many veterans in the region, they soon left once they felt that Watts was not paying them enough.

After another run through the territories, the Sheepherders ended up working for Jim Crockett Promotions again, feuding with the Rock ‘N’ Roll Express until Ricky Morton was released from the promotion and they found themselves floundering in the mid-card. It was around this time that the wildest brawlers of the age received the call from the WWF and were repackaged them as the Bushwhackers.

The rest, as they say is history… 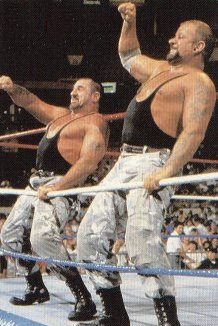 Although history will probably remember Luke and Butch as the ugly New Zealanders with the stupid marching forearms and the worst finisher in tag team history, at one point in their career they were innovative brawlers, who shed blood in over 35 different promotions around the world, putting their bodies on the line night after night.

Quite why Vince chose to sign them in the first place is something of a mystery. For a man who wanted to promote his company as good, wholesome family entertainment, the wild brawlers from south of the equator seem an odd choice. When they should have been cementing their legacy in the Caribbean, they were forced into comedy matches (and I use that word in its loosest sense) with pompous snobs (the Beverleys), Russian stereotypes (the Bolsheviks) and fat bastards (Natural Disasters).

The one feud that should have yielded an awesome brawl was their brief run against the Nasty Boys but, instead of broken noses, steel chairs and crimson masks we got Battering Rams, head licking and Luke getting his face rubbed into Brian Knobbs’ armpit. What a waste.

If you get a chance, pick up the Bushwhackers Shoot Interview from Shooting Star Video, where you get to see Luke and Butch in their prime against the Fantastics, as well as their short lived run with ECW.

That’s it for this week – let me know what you think of this little history lesson and I’ll be back with a new column as soon as possible. I’m not sure of the topic at the moment but I’m sure I’ll come up with something.