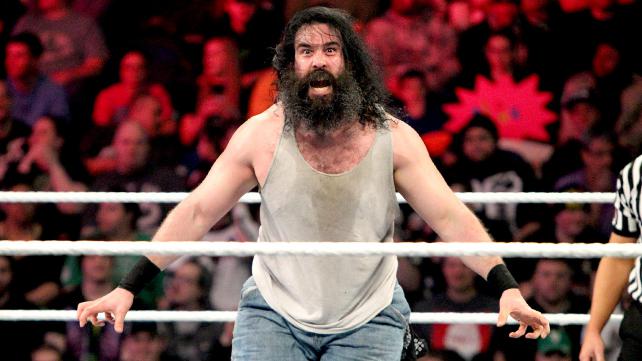 In fairness, Harper got a big assist from the Authority, as Ziggler was fighting against big odds to retain his title.

Read the full recap of the match below!

Tonight’s WWE RAW from Roanoke, Virginia.  We go to the ring and out comes Triple H, Stephanie McMahon, Kane, Seth Rollins, Mark Henry, Rusev, Lana, Luke Harper, Joey Mercury and Jamie Noble. Triple H talks about how Vince McMahon set the stipulation for Survivor Series a few weeks back. Triple H talks about how fans would want The Authority to be removed from power and they start a “yes!” chant. Stephanie taunts them. He says fans are sheep and need someone to follow them. Triple H takes a shot at WCW and says the inmates ran the asylum there and they won’t let that happen to WWE. He goes on and praises Team Authority.

They say The Authority will decimate Team Cena tonight and see who’s left to sign the contract later tonight. Stephanie goes over each member of Team Authority and they get boos. Harper tells Stephanie he’s a team player. She talks about how Team Cena is down a man and out comes Ryback to a big pop. Ryback speaks from the stage after a “feed me more” chant. He says The Authority wants what’s best for business, Cena wants what’s best for WWE and he wants what’s best for Ryback. Stephanie apologizes for what happened last week as does Kane. Stephanie shows us a clip from last year where Ryback and Cena got into it on the mic with Cena mocking Ryback. Stephanie says Cena is jealous of The Big Guy. Ryback says he plays for Team Ryback and walks away. Triple H says that’s a wise decision. Triple H gets Harper hype for his match and calls WWE Intercontinental Champion Dolph Ziggler to the ring to a big pop.

The Authority looks on as Ziggler makes his way to the ring. We go to commercial.

Back from the break and Rollins is on commentary as Team Authority stands by. Lilian Garcia informs us that this will now be an Intercontinental Title match. She does formal ring introductions. The Stooges attack Ziggler before the bell and he goes down. He gets up and Rollins nails him with the briefcase. The referee checks on Ziggler and Ziggler yells for the bell. Harper nails a huge running boot for a 2 count. Harper with a big powerbomb for another 2 count. Harper misses a running boot in the corner and lands on the floor. We go to commercial. Back from the break and Harper is in control. Harper drops Ziggler into a big right hand for another 2 count. Harper with a Gator Roll and a headlock. Ziggler counters and Harper runs into the ring post. Ziggler with the Fame-asser for a 2 count. Harper catches a kick and nails a big sideslam for a 2 count. Ziggler counters the clothesline with a superkick for 2. Harper with a knee. Ziggler blocks a powerbomb but Harper drops him and nails a big clothesline for the win.

After the match, Harper celebrates with his gold as The Stooges and Rollins go to Ziggler. Rollins taunts Ziggler and nails a Curb Stomp. Harper is left alone in the ring to stand over Ziggler with the title.