Home / Podcasts / Maria Kanellis on Between The Ropes Recap

Maria Kanellis on Between The Ropes Recap 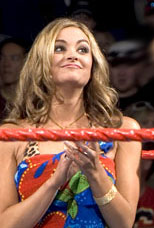 WWE Diva Maria appeared as a guest on the October 31st edition of Between the Ropes to discuss WrestleMania 24 next year, working with Santino Marella, her relationship with C.M. Punk, and more.

Maria is looking forward to returning to Orlando for WrestleMania 24 on March 30th. “I’m definitely excited. It’s my third one (WrestleMania), so I’ve been there, I’ve seen it before. This year, we’re going to have seventy-five thousand people – if not more. So, it’s huge. Every year it gets bigger and bigger, and I’m excited for it.”

Maria recalled her memories of last year’s WrestleMania. “What’s strange is when we performed up in Detroit, I never even went out to see how many people there were – and I think there were ninety-three thousand that year. And that was just this past April. I did not go and look how many people there were. And when I got out there, it was actually not that loud – it was so loud that you really couldn’t hear the people. But then afterwards – after I had already went out – I went upstairs and looked down on the arena, and oh, my gosh, I got more nervous standing there and looking down on the arena than I did standing around the ring. So, it was insane. Performing in front of that many people is such an adrenaline rush.”

Santino Marella’s promos on Raw have become a weekly highlight for many fans, and Maria spoke about her on-air relationship with the former Intercontinental Champion, including the time when Marella interrupted a live singing performance by Lilian Garcia. “That boy can sing! Well, at least he thinks he can sing. It’s almost like Jillian in the sense that you watch it, and it’s like watching a car accident – you keep watching it, and it’s like, â€˜Oh my goodness, what else is he going to say?'”

When asked how she prevents herself from laughing when alongside Santino on camera, Maria admitted that she actually has broken out a few times. “But that’s the fun in it,” she adds. “That’s what’s supposed to happen. I mean, you react to what’s going on. You react to what that person’s saying. And if someone’s speaking baby-talk to you like he (Marella) did this past Monday, you talk baby-talk right back to him. So, it’s fun – it’s probably the most fun I’ve had so far. Other than a few interviews I’ve had with Cena, I’d have to say that this time right now is so much fun.”

In addition to maintaining her role as Santino Marella’s valet, Maria explained why she also enjoys her job as a backstage interviewer for Raw. “I love doing the backstage stuff, because then I can work with more of the guys. A lot of the girls have only worked with girls, whereas I get everybody’s flavor. I get to find out what everybody’s doing. I stood next to â€˜MR. KENNEDY!’ before he was Mr. Kennedy. So, I’ve interviewed so many of these guys, and it is amazing to be able to work with all of the guys and all of the girls.”

Maria spoke about the divas she most admired prior to entering WWE. “I loved Lita. I thought she was incredible. Such a performer. Amazing. Fearless – very fearless. Trish Stratus – she’s amazing. Great wrester. And watching those girls out there was inspiring. It’s like, these beautiful women are out there kicking some ass.”

Most WWE divas are required to make at least sporadic appearances in the ring, and Maria discussed how she has progressed as a wrestler. “I spent some time in Tampa – there is a wrestling school there. So, I’m starting to get in the ring more and really focusing, because what I want and what I have my eye on is the Women’s Championship. So, hopefully I will get a shot at that and actually have that belt around my waist.”

Maria had nothing but kind words for ex-boyfriend C.M. Punk and addressed her feelings regarding relationships within the wrestling business. “I think it’s very difficult … I’m very happy for him (Punk) and what he’s doing. He’s an incredible guy, he really is. Me and C.M. Punk, we had a great relationship. Sometimes when two people are working so hard to excel in their career, they can’t always focus on the relationship. I still care for him a lot, he still cares for me a lot. But, at this point, it just doesn’t work the best. We still talk, we have a great relationship. I wish him the best.”

You can hear this interview in its entirety, as well as the complete archived October 31st edition of Between the Ropes – including Maria’s thoughts on being a woman in a business dominated by men, what prompted her to pursue a career in wrestling, further discussion about relationships within the industry and more – at www.BetweentheRopes.com. Between the Ropes can be heard Wednesday nights from 10:00pm to 12:00am ET on WQTM 740 The Team in Orlando, Florida and streaming worldwide on BetweenTheRopes.com.