Maria talks to PWMania.com about CM Punk, ROH, NXT, and much more 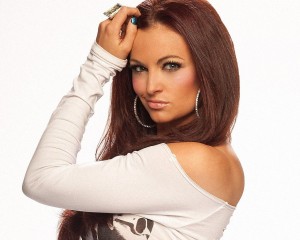 Maria talks to PWMania.com about CM Punk, ROH, NXT, and much more!

Former WWE Diva and first Lady of Ring of Honor, Maria Kanellis recently took some time to participate in an exclusive in-depth interview with PWMania.com. Maria spoke on a variety of subjects from her favorite wrestler growing up, the CM Punk and WWE situation, WWE & NXT’s Divas, her future and more. Here are some highlights from the interview:

Favorite Wrestler Growing Up: My favorite female wrestler was Lita. I think it’s incredible to know she’s getting inducted this year. She gave me a strong female role model. My mom was a great woman, but my dad was always the king of the castle, so to speak. Lita was a strong female and did what she pleased and I admired that.

WWE & NXT Divas: I think they have great female talents nowadays. AJ and Natalya are great wrestlers. Paige in NXT can hang with any of the guys there. So I don’t think WWE is lacking when it comes to women talents. I hope the girls get more and more time to get into the spotlight because of how good they are becoming.

CM Punk & WWE Situation: I don’t know all of what’s going on in the wrestling world other than ROH because I’ve been so busy with school. What I do know is that Punk has worked incredibly hard to get where he’s at. He’s the example you use when you talk about independent wrestlers who come to WWE. He was the first in that transition. He came from the independents and made a name for himself in WWE. He’s already done the work and doesn’t need to do anything else in his career to solidify the statement he has made. He changed wrestling forever because he showed that some dirty, stinky wrestler from Chicago can become a famous superstar. So whatever he decides is the right decision for him.

Her ROH Future & WWE: That’s really up in the air. You never know. There’s some guys whom you never thought would go back to WWE because of what they’ve said in the past or the drama that’s happened. But they end up going back. So, never say never.

Maria also talks about her singing career, her favorite WWE moments, the weirdest question she’s ever received, school and more. You can read the interview in its entirety at this link.