Home / Womens Wrestling / Michelle McCool to discuss her career, marriage, and more on her website

Michelle McCool to discuss her career, marriage, and more on her website 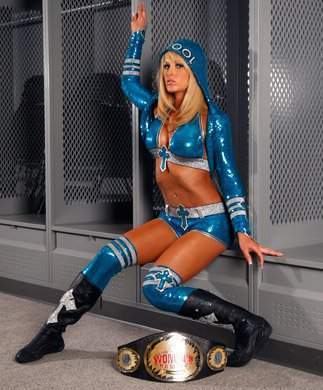 Former WWE Diva Michelle McCool has finally broken her silence on the taboo topic of her marriage to The Undertaker. In collaboration with MichelleMcCool.net, the four-time champion candidly addresses her relationship with “The Deadman” in a video blog that will be released this summer. A teaser has been released where she appears to respond to critics attributing her lofty position in WWE to her influential partner rather than her ability to perform.

The four-time champion will address her marriage and other topics in the vlogs, including her dealings with WWE head Vince McMahon. The synopsis of the teaser is as follows: “Michelle McCool is trying something different with MichelleMcCool.Net. For years, she’s answered questions, written blogs, and has even tweeted back-and-forth on occasion with her Faithful Followers. This time, she’s going to change it up — she’s going to vlog. In her vlogs, Michelle’s at her most candid — like you’ve never seen her before. She’s talking about anything and everything, from her precious baby girl, to even her husband… yeah, him. Raw and real, Michelle doesn’t shy away from controversy; it’s a different side of Michelle McCool… the one you thought you’d never see.”

Months after her spring 2011 retirement from the squared circle, McCool was asked in an interview if she received resentment from her colleagues due to her relationship with The Undertaker and responded, “Bottom line: People in our business are always going to look to find reasons to see the negative in somebody and to become resentful. I don’t really know where it began: probably with me getting the tag as “Diva Search reject.” But I don’t know anybody who, if they had an opportunity like the Diva Search, they wouldn’t jump at it. If they didn’t jump at it, they’d be idiots.

Check out MichelleMcCool.net for the video interview.