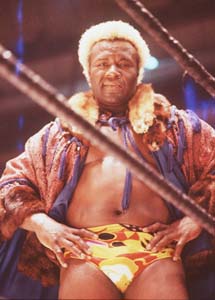 Wondering if he is still alive and if so… send him my Thank you. It was very thrilling.

Michelle wrote:
I just wanted to say that Sweet Daddy is a dj at the Duke of York, at Queen and Leslie streets in Toronto, Canada. He plays an awesome mix of hip hop, reggaeton, and country. He won’t, however, play anything with swearing in it because he’s a born again Christian. My friend requested Funky Cold Medina and he had it. He has a picture in his dj booth of him wrestling in his younger days. He’s the coolest!