By OWW Contributor on September 15, 2016@owwcom 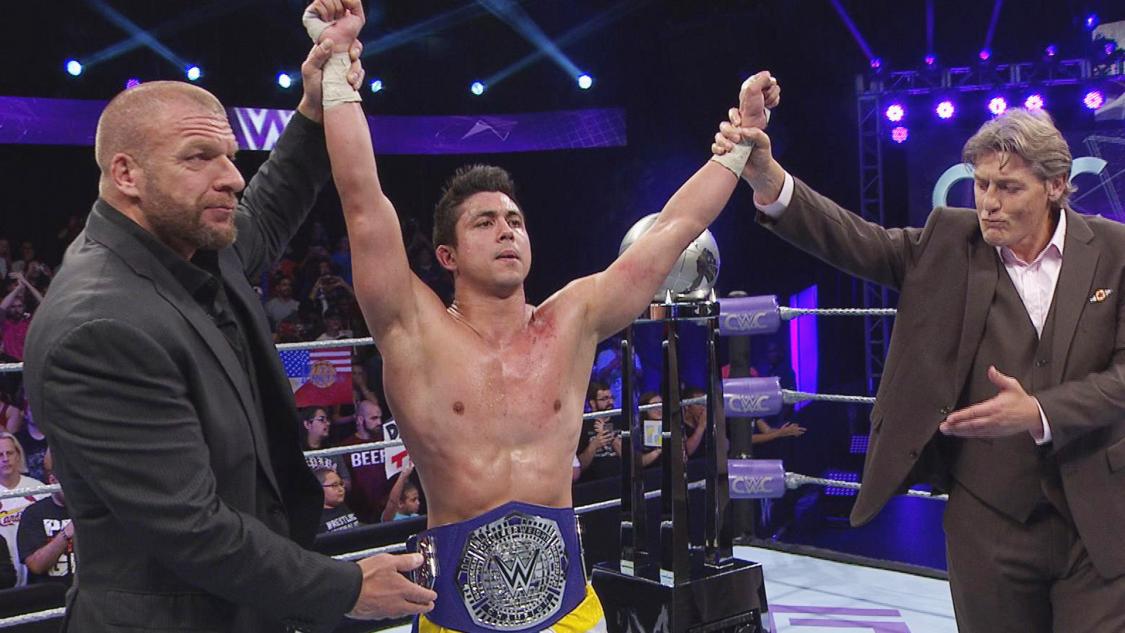 The biggest tournament of the summer started off with 32 of the world’s best cruiserweights, and culminated in T.J. Perkins winning the Cruiserweight Classic to become Raw’s first WWE Cruiserweight Champion!

Here is a recap of the final match:

Before the bell sounds, WWE COO Triple H comes out and says they are here tonight to make history. “We started with 32 and now we see two of the best in the world. But, we are looking for the one who will be the winner of the first Cruiserweight Classic. “CWC” chants by Full Sail.” Triple H says that even more importantly than that, we are looking for the one that will go to RAW on Monday Night as the new Cruiserweight Champion! Triple H shows off the new Cruiserweight title belt, shakes both men’s hands and leaves as the crowd chants “Thank you Hunter.”

Bell sounds as both men do some chain wrestling early. Dueling chants by the crowd. They continue to exchange on the mat until Perkins hooks in a Reverse Pendulum Stretch! Metalik counters out with a roll-up for 2. They go back to the mat, then they evade each other until Perkins locks in an Octopus Stretch, then takes down Metalik and locks in a Muta Lock. Metalik gets to the ropes. Metalik goes outside, but when Perkins goes to the apron, Metalik dropkicks his knees out, sending Perkins outside. Metalik then wipes out Perkins with a tope suicida headbutt attack! Back in, Metalik hits a Rope-Walk Senton Bomb for a close 2. Metalik locks Perkins in a variation of the Surfboard, but Perkins gets to the ropes. Big overhand chop by Metalik, but Perkins with a handstand on the turnbuckles into a headscissors, then hits a Top Rope Rana that sends them both all the way to the outside! Back in, Perkins with a Senton Atomico for 2. Basement dropkick to the back of Metalik’s head for 2. Armbar by Perkins, but Metalik gets to the ropes. Side slam by Perkins for 2. Arm-Trap Chinlock by Perkins, then hits a suplex. Metalik slips out of a back suplex, but Perkins with an uppercut. Perkins sent onto the apron, then Metalik charges, leaps over the ropes and ranas Perkins all the way down to the outside! Metalik with a head of steam and hits a Spring-Out Flip Dive, wiping out Perkins! “CWC” chants by Full Sail. Back in, Metalik with a Springboard Elbow Drop for a close 2. “Lucha Libre” chants by Full Sail. Perkins avoids a corner charge, but Metalik walks up the ropes and hits a missile dropkick, but Perkins avoids the Running Shooting Star Press and locks in the TJP Clutch, but Metalik reaches the ropes! Leg kicks by Perkins, but Metalik with another big overhand chop. They trade strikes, but Perkins with a spin kick, but then Metalik with a superkick! Metalik charges, but Perkins catches him with a dropkick to the knees. Metalik avoids a charge and hits another superkick, but Perkins slips out of the Metalik Driver. Perkins goes for the Detonation Kick, but Metalik counters it with a DDT for a close 2. Metalik heads up top and goes for a Moonsault, but Perkins gets the feet up. Dodon by Perkins for a close 2, then locks Metalik back in the TJP Clutch! Metalik crawls to the ropes, but Perkins pulls him back to the center! “Do not tap” chants by the crowd. Perkins goes to pull Metalik back again, but Metalik counters with a roll-up for a real close 2. “This is awesome” chants by Full Sail. Metalik hits the Metalik Driver, but he hurt his knee on the way down. Metalik drapes the arm over, but Perkins kicks out as Metalik is clutching his leg in pain. Dueling chants by Full Sail for both men. Metalik with strikes to Perkins, but Perkins counters out of the Metalik Driver and hits a slingshot dropkick. Perkins heads up top, but Metalik stops him with an enziguri. They fight up top, then Metalik goes for a Super Metalik Driver, but Perkins counters out right back into the TJP Clutch in the dead-center of the ring!

Metalik tries to fight it, but cannot and taps! WOW!