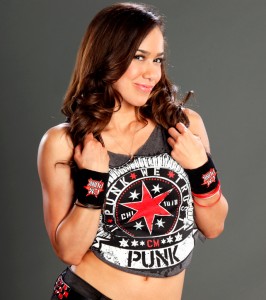 Raw General Manager AJ Lee appeared on The Soscia Network with Brian Soscia on 106.1 in Philadelphia, Pennsylvania to promote this Sunday’s SummerSlam pay-per-view event and discuss her ascension from teenage wrestling fan to presiding over WWE’s flagship program.

After revealing that she made the decision to become a professional wrestler when she was 12-years-old, Lee is asked about a YouTube video of herself as a teenager meeting Amy “Lita” Dumas at an autograph signing (from 2001). She divulges, “Maybe a year ago, at the Slammys, I actually showed Lita that video. And I was like, “Look at this!” It was very cool to have that moment.”

Providing background on the moment, she continues, “Growing up, I didn’t have a lot and we had a really rough childhood and my only escape from all that was wrestling and was having these women to look up to and just hoping one day that I could get out of it, maybe I could be like them and get myself out of the situation I was in. Meeting her, it was like, “Okay, this is my hero, the only person I have to make me feel better about life right now.” It was such a good moment for me. You can actually see my mom in the background, like, crying! It’s like, yes, I’m a huge fan and I loved her and I loved meeting her, but it represented … I was going through a lot. If I could talk to little AJ back then and tell her what would happen one day.”

In regards to feeling when she “made it” in the professional wrestling industry, she says, “I think just getting signed would have been enough for me. Just being a part of the company, just being anything. I still have the first envelope they sent me, the first mail, I keep everything. Just like seeing WWE, in my mailbox! I’m such a fan and I think just getting signed would have been the most amazing thing in the world to me. But everything we’ve done so far, just having a WrestleMania moment already is mind-boggling. I don’t even understand it. Hopefully one of these days I can sit-down and drink it all in, but it’s been go-go-go for the past year-and-a-half. It’s still very surreal and I kind of don’t believe it still. I’m waiting to wake up.”

Lee was also asked if there is any chance she would follow in the footsteps of past WWE Divas such as Sable and pose for Playboy. “Oh my God. Never, ever, ever! I can barely wear a low-cut shirt,” she responds. “I’m prude and I think that’s what works for me is kind of being very innocent and prudish. It’s gotten me pretty far and there are certain things that should be left to the imagination.” She adds, “Nothing wrong with it, but it’s not for me.”

“The Geek Goddess” also discusses how she got her foot in WWE’s door, which wrestlers she idolized growing up, her relationship with Daniel Bryan and she also reveals her match picks for SummerSlam.

QUESTION:  Is AJ doing a good job as Raw GM?