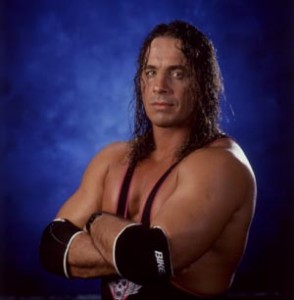 David Dexter reports that Bret Hart recently criticized the WWE’s creative team in an interview with the UK Sun’s Rob McNichol on the One Sided Ring podcast. He thinks the WWE “has spent too much time in the last couple of years making television stars rather than wrestlers.”

He added: “They have some great wrestlers, and Tyson Kidd is as schooled as they get. Technically and mentally – as far as wrestling psychology, moves, timing – Tyson Kidd is maybe one of the best in the world. There are a lot of wrestlers in that company that have not been used properly. Brodus Clay is a guy that when I first saw how he moved and how skilled he was as a big 300-pounder, and now I see him with the girls and he’s just a cartoon character. Whoever thought of that should be taken out the back and shot.”

He also talked about returning to Montreal on RAW Monday night: “It was a big night. I knew it was going to be, because any time I’ve gone back to Montreal for anything, it’s always been emotional. It was fitting, going full circle. I think it was important to do. I think it was more important than WWE or anyone realized. I think when they called me it was more to be there for Pat Patterson Appreciation Night than anything else — I love Pat and I’m a big fan of his — but it had more significance to me than that. The Montreal Screwjob was a famous, historical meltdown that in a lot of ways was my finest hour.”