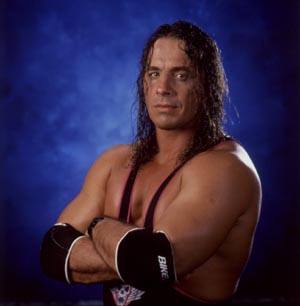 Arda Ocal (@arda_ocal) of the Baltimore Sun and Layfield Report (@LayfieldReport) recently conducted a live Q/A with Bret “Hit Man” Hart (@BretHart). In the session which was primary questions from the audience, many questions were covered including:
– Opponents we wished he had a chance to work and would have liked to work one more match against
– His interactions with Batista
– Opinions of John Cena and the opinions of him from critics
– Who he considers today to be the “Best There is, Best There Was and the Best There ever will be”
Ocal asked him about comments he made when the pair last spoke in an interview a few weeks ago about Triple H not being in his Top 1000 wrestlers and giving Undertaker vs Triple H at Wrestlemania 28 a 4 out of 10.
Bret is aware that this has become a phenomenon among the internet wrestling community and also gave the match between Triple H and Brock Lesnar at Wrestlemania 29 a 4/10. He also reveals that he and Triple H dont speak today and when they see each other its typically nothing more than “Hi, bye”. Though he does keep in contact today with Shawn Michaels.
He gives his opinions on The Rock vs John Cena in the main event.
FULL LINK: http://bit.ly/116jgvU
http://www.youtube.com/embed/DSIYmDweNiQ