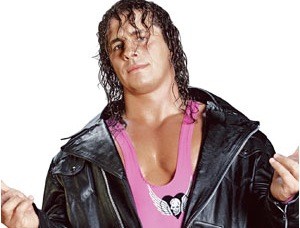 WWE Hall of Famer Bret Hart recently answered a bunch of fan questions from readers at WrestleNewz.com. Here are some highlights from the interview:

Will he be making a career out of improv comedy he’s been doing:
“I don’t think so, but you never know what can happen. I have a lot of fun doing them. I appreciate people giving me a stage. They present scenarios that are quite easy for anybody to step into and be quite funny. Sometimes I can be spontaneously funny. When you just make it up as you go along it’s hit or miss, but I’ve found I’ve done pretty good.”

His relationship with Vince McMahon:
“The last conversations we’ve had have been good. He seems to always be very warm and friendly with me. I would say he’s on the very best of terms with me. I think the last time I really talked to him, my knee was pretty swollen. He wanted me to go out to the ring in Philadelphia — and I did go out — but we were talking about our various injuries, since he had just had hip surgery. We’ve both sort of realized that we’re not getting any younger.”

What’s the greatest compliment he ever received:
“(Long pause) I think it’s that I was often told by the wrestlers I worked with that I was their best match. That was every single one of them, from Mr. Perfect to my brother Owen to the Bulldog to the Undertaker to Steve Austin — almost every single one of them pulled me aside and said the best match they ever had was the one against me. The list goes on — 1-2-3 Kid, Kevin Nash, Roddy Piper, Yokozuna — and I think it’s true. Every match was a different story, and we made magic. The other thing is that I never hurt anybody in all the years I wrestled. I had wrestlers come up to me and thank me for the match every night, thanking me because there was never any extra aches and pains or injuries. No animals were harmed in the making of my movies!”