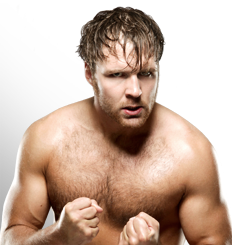 Phil Strum: The Shield is one of the most successful acts in WWE in years. To you, what’s made it so good and what’s made it connect with the audience so well.

Dean Ambrose: We’re three guys who are very confident in what we can do and we’re not dilly-dallying around. We know how good we are. We want to go out there and really try to grab the bull by the horns. The way we look it, it’s like this company is ours for the taking. The company wants young guys to step up and it’s like ‘I don’t care we’re taking over.’

A lot of veterans and the office have wanted guys to have that kind of attitude. We’re not afraid and we’re not intimidated. In our minds, we are the main event. Being fresh and being new, no one’s seen our faces before on TV. Maybe they knew me and Seth before we were on TV. Roman is a natural and he keeps getting better every day. We have so much talent and so much confidence in our ability. We came in and we were already on the level and we can already go.

PS: Do you know who came up with the concept for The Shield? Was it originally supposed to branch off so much from the attack on Ryback or did it just grow sort of organically?

DA: I can tell you it’s been an ever-evolving process. I don’t think we knew where we wanted to go. Every week, it’s been a new idea. An on-the-fly idea. Coming out of the crowd was not a pre-planned, premeditated idea that someone came up with in a meeting room. Everything has kind of organically evolved. Instead of coming through the entrance way, we wanted to make a statement to people that what you see is not like every other WWE superstar, every other normal wrestler. It was done to separate ourselves. We’re not like everyone in the back. We’re completely different and more dangerous and something you’ve got to keep your eyes on.

Everything from the moves we do to the things we wear to the things we say, all of them have been on the fly. We’re making it up as we go along. If something feels natural, we do it. If somebody says a good line, it’s like, hey I like that line, let’s go with it. Or someone does a good move, hey I like that move, let’s do that again. It’s been an on-the-job process. You’re watching it unfold with your eyes as much as we are and I think that’s one of the exciting things for the fans.

PS: What was it like being in the ring on SmackDown and staring across at The Undertaker?

DA: Being across from The Undertaker is a very surreal experience. It felt like it must have been a dream. On the other hand, this is a window that’s only open for who knows how long and how quickly it’s going to close. You better take advantage of it. I’m not intimidated by any scenario, whether it’s The Undertaker or John Cena or anybody. We’re going to do this. At this level, it’s kind of like the fight or flight kind of thing. All of us are kind of put in a position where you don’t get intimidated by the magnitude or the pressure of it. You don’t feel it. You feel the aura of The Undertaker. He has a presence. This is the most legendary guy you’re standing across the ring from and as big of an opponent as you can get. It’s like winning the lottery and I’m not about to not cash my lottery ticket in. You have ice water running through your veins. You’re out of your mind. It’s funny. The music’s playing. The pyro’s going off. It’s The Undertaker’s music. But once the bell rings and you make physical contact, it starts to work and the world shrinks down to a 20-by-20 ring and it’s any other match really and you have to stay on your game once the bell rings.