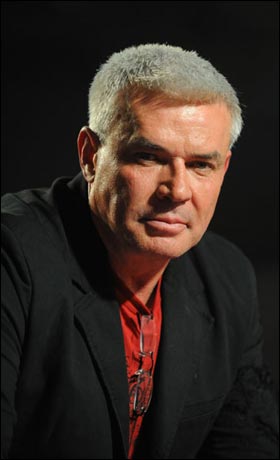 TNA Wrestling producer Eric Bischoff recently appeared on Inside The Ropes where he addressed critical remarks from WWE Hall of Famer Bret Hart. Highlights from the interview are as follows:

On Bret Hart’s run in WCW:  “I had spoken to and met Bret several times before he made the jump. I was obviously excited to have him but clearly Bret Hart was a very broken….and in my opinion still is, from the interviews I hear him do, a very sad, broken and bitter person. That was pretty evident when he first came over. He was a shadow or a shell of his former self. Wherever Bret was, the high point of his character, what I got was a kind of broken, sad shell of that and quite honestly I don’t think he’s ever come out of it.”

On Bret’s recent comments saying he “knows nothing about wrestling” and calling him “an idiot”:   “It’s not unusual for guys like Bret Hart, from that era….the only way they know how to get over is to get over at the expense of someone else. Bret Hart’s trying very hard to stay relevant. Unfortunately, he’s no longer relevant. He was a big star, he had a big name at one point, he was an important character in the history of the business but he’s not any longer and I’m sure that’s hard on him. I know myself how it feels to realize that that your biggest and best days as a performer are behind you. I’m very comfortable with that, I’ve embraced it but it’s hard for a lot of guys who’ve never been anything other than performers. They have a hard time with that. It’s not easy getting older in the wrestling business, believe me, when you’re surrounded by younger and younger people who in many ways aren’t as over or as skilled or as popular as you may have been or still are now. But this business is a business that’s served by youth and change. And for someone like Bret, that manifests itself in his personality, lashing out at others. It’s funny, when he came to me he hated Vince McMahon, he hated everyone in the WWE from the office to half the roster. He didn’t have a good thing to say about any of the McMahons. Then when he got the opportunity to go back and work for them, he had to shift that. Then his hatred was for someone else like Bill Goldberg for giving him a concussion and now it’s for me and for Hulk, there’s no rhyme or reason for it and as far as his opinion of my value and what I’ve achieved in the wrestling business, I’ll let my body of work and success speak for itself.”

His future in TNA:  “I really don’t plan on being in the wrestling business too much longer and I say that in a very grateful and positive way. This business has been great for me and my family. It’s been almost 30 years. I’m still shocked to this day. My goal now isn’t to accomplish anything professionally, because I’ve kind of been there, done that. My goal now and this is gonna sound kinda corny, I really like teaching. I like watching guys like Matt Connaway and Dave Lagana, watching them grow into new areas that they haven’t been able to get into before. Someday, hopefully, in the near future, I’m going to be able to walk away from this business and when I do, I want to be able to know that I was able to shape, in one way shape or form, guys who will carry on and be the future of the business.

Bischoff also talked about signing Randy Savage to a WCW contract, comparisons between Aces and Eights and the nWo, and much more. The full interview is available at: