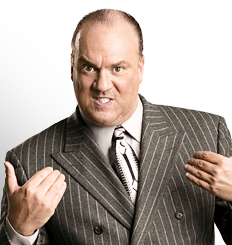 Xfinity published an interview with WWE’s Paul Heyman. Here are some highlights:

On the significance of his role in last year’s WrestleMania: “It’s huge. Nothing short of it. And probably even bigger than that adjective. It’s exhilarating for me because you have the most unique, the most gifted athlete in the history of the WWE, or UFC, or college athletics in Brock Lesnar, going against a wrestler who probably has more heart, more determination, and the ability to overcome the odds better than anybody else that I’ve ever come across in my entire career in CM Punk. It’s a fascinating match-up. It won’t be over in 30 seconds. This is going to be an all-night affair. There’s an old expression in the professional wrestling business; “This match will be worth the price of admission.” I humbly suggest that Brock Lesnar vs. CM Punk is worth the price of admission alone.”

On Brock Lesnar telling him to ‘say something stupid’ on RAW recently: “He wanted me to say something stupid! Brock Lesnar is a man who thinks in a far different way than your average beast walking down the street. This is a once-in-a-lifetime athlete. Brock made his point, he told the world, “I, Brock Lesnar, am better than CM Punk.” So, what else is there for us to say?”

On his thoughts about Daniel Bryan: “I’m not done recruiting Daniel Bryan. I think Daniel Bryan is a fascinating performer who has put on arguably the most consistent string of best matches of the past year. The striking thing about Daniel Bryan is the best is yet to come with him. Daniel Bryan still has more to offer. And having seen footage of him dating back to when he was wrestling in VFW halls and very small arenas and high school gymnasiums, he still has so much more that the WWE Universe hasn’t seen. I’m admittedly, and I will confess to this, a huge fan of Daniel Bryan.”

On his thoughts about John Cena: “I think there’s a streak going involving John Cena that both the WWE Universe and the media have failed to pick up on. The glory days of “Stone Cold” Steve Austin lasted two, maybe two-and-a-half years. That was the peak of his run. He came back as General Manager, but day-to-day, going to every city, main eventing every Pay Per View, the focal point of Monday Night Raw…Steve Austin’s peak was two-and-a-half years. Dwayne “The Rock” Johnson’s peak was along the same lines. John Cena has been the focal point of WWE since 2005. For eight and now going on nine years, John Cena has not only main evented all the Pay Per Views, been the major attraction on Raw. John Cena has gone to every city, main events all the live events, and yet he still makes all these media appearances, he’s done more Make-A-Wish Foundation visits than anybody in history…and he’s a tireless workhorse. And he shows up last Monday with his elbow…looking grotesquely…is that a word? His elbow was so messed up and yet he says, “Wrap me up, I’m going out there to perform because the people are counting on me.” There is a work ethic to John Cena that is to behold.”

On his thoughts about Bray Wyatt: “It’s an emotional presentation, and it sets him apart from everyone else which means that Bray Wyatt will stand out. Whether it’s in WWE or UFC or Major League Baseball or the NBA or the NFL or television or movies…any genre that is star-driven has the need for unique personalities. And Bray Wyatt is as unique as they come.”

On how TNA Impact Wrestling handled Rob Van Dam: “I don’t mind getting into detail. I think TNA squandered the opportunity of exploiting the talents of Rob Van Dam. And I don’t think that’s a mistake the WWE is going to repeat.”