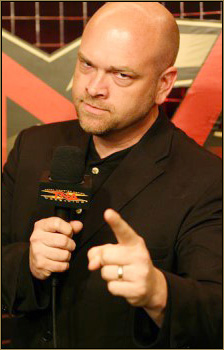 David Dexter reports that Scott Hudson was a guest on Inside the Ropes and compared Goldberg to Ryback. Here are highlights:

On Sting‘s character changing into the Crow gimmick in 1996: “I thought it was brilliant. Sting for better or worse, is never going to be confused with Shawn Michaels or Kenta Kobashi or the great workers of the business. It’s not that Sting was a poor worker but he wasn’t gonna go out there and give you a 5 star match every time he laced up a pair of boots. But the thing that got him over was his charisma. You go back and look at those Sting promos, they weren’t that good either. They were passable promos, some didn’t make any sense but he had such a charisma that he got over. And Eric, to his everlasting credit, got the idea, he said “What can we do to get Sting over? He’s only getting so hot and then when we try to put him on top, the buyrates go down, the ratings go down, we need to do something to elevate him to where he can become the top guy” And Eric’s idea was, you know everyone likes Sting nobody doesn’t like Sting so Eric thought Sting can’t really work and isn’t that great at promos so how about if we have him not work and not say anything and then he’ll be really over. So that’s what they did. If you go back and look at that whole build up to Starrcade 97, it took him months to even say anything or point the black bat at somebody. And he was never more over than at that time when he didn’t say anything and he didn’t wrestle. That was the most popular he’s ever been.”

On comparisons between Goldberg and Ryback: “Eric Bischoff was smart enough to know the NWO weren’t gonna last forever so he started building up Goldberg who would go on to be the overarching storyline and I guess be the Hulk Hogan of 1985 in WCW in 1998. That was a terrific way to use him, but then by comparison, you look at Ryback right now in the WWE, who is so obviously a knock off of what we did with Goldberg and if he’s over at all, and I question whether or not he is, he’s nowhere near as over as Goldberg was. And it’s because we booked Goldberg correctly. He never lost, that was the whole gimmick and the minute he lost he lost that luster. Well Ryback has been beaten by, who knows, Santino Marella? Lilian Garcia? Who knows? He’s been beaten by everybody. You know, we let Goldberg be the monster and beat up everybody. They tried to make Ryback a monster and he gets beaten up. Nobody buys that. That gimmick only has a certain shelf life unless you build him as this incredible monster and we built Goldberg perfectly only to screw it up with that finger poke of doom and stuff.”

He also spoke about his time in WCW, feelings on Bret Hart in WCW, Russo’s booking, the sale of the company, his short stint in the WWF Invasion storyline, thoughts on Vince McMahon and more.