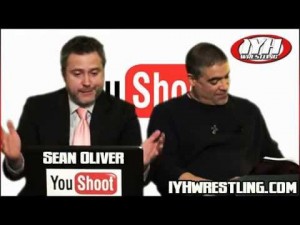 His opinion of Vince Russo:

“I’m still a little confused with…the hatred, the voracious hatred toward the guy…I never got it…The guy wrote wrestling shows; he was singularly charged with getting higher ratings every week than the previous week and firmly entrenched in that Monday night war…You got several shows a week, fifty-two weeks a year, plus Pay-Per-Views.  That’s a lot of original material to come up with.  You’re going to have a lot of stuff that hits the wall; you can’t hit ‘em all out of the park.  But there’s no denying the guy was writing TV when that second boom period hit…I’m not saying he’s responsible for The Rock or responsible for (Steve) Austin, but he was writing what came out of their mouths when they were skyrocketing in popularity.  There’s no denying that.”

His opinion on whether or not the Montreal Screwjob was a work:

“I think there’s a lot of evidence there that it was; I don’t know, I can’t say definitively that it was a work, but I always got the sense from seeing it the first time that it was, and here’s why:  (A) There was a legitimate problem.  Bret (Hart) had to get out of his contract.  He does fancy himself a hero of Canada and didn’t want to lose the title in Canada.  Vince (McMahon) had to get that strap off of him, and couldn’t pay him anymore.  So there was a real conundrum there.  Now, how do you resolve it where everybody comes out smelling like a rose?  Bret can be free from the contract, go take his money in WCW, and have a tremendous, tremendous rub in public interest in him when he debuts on Monday night and save face in losing the belt…Now, from Vince’s standpoint; he gets the belt back, Bret goes, he’s free of having to pay that contract, and he’s now able to explore this avenue where he can spin himself off into a bit of a character…and create what went on to be…one of the most hated heels in wrestling ever…Isn’t it a coincidence that everybody made the right choice?  It worked out for everybody…Now, (B)…The only people that were supposed to have known that this was going to happen were Vince McMahon and Shawn (Michaels) and maybe Triple H…and the referee…The guy in the production truck doesn’t know, the cameraman doesn’t know, the guy calling the shots in the production truck doesn’t know, we are to believe.  The title changes hands, Shawn’s music hits, it’s ready, it’s cued, and the camera cuts to…not the new champion, but a super tight close-up of a disgusted, upset Bret Hart…We cut to the loser?  That’s never happened.  You cut to the shot of the winner holding up the belt or whatever they’re doing…the camera chooses Bret’s face to cut to?  Why?  Unless you WANT us to see the angry, upset, dejected, and screwed Bret Hart…That’s just one possible theory that I tend to believe.”

Other topics discussed with Sean included:

If anyone is interested in ordering any DVDs from Kayfabe Commentaries or taking advantage of their new KC On Demand service where you can watch the interviews from your own computer, visit their website at http://www.kayfabecommentaries.com.

This interview is available for listening at http://www.iyhwrestling.com/viewnews.php?autoid=4757