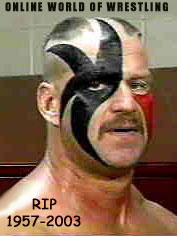 Posted by Goldenboy79 on OWW Genesis.

As the only team to win the AWA, NWA, WWF and All Japan tag titles, the Road Warriors- Animal & Hawk, were the highest drawing and biggest earning tandem in wrestling history. Along with Hulk Hogan, the Warriors helped to popularise the juiced up muscleman look that 75% of big name wrestlers had by the late 1980s. During their peak years from 1984-89, the Road Warriors were an awesome duo, destroying opponents with power moves, and had a huge following in the US & Japan who loved their no-selling, kick-ass ring styles and unique image. But for Hawk, his success and excessive lifestyle caught up with him in the end. The years of steroid and drug use (especially Cocaine) ended his ride for good on October 18th 2003 suffering a massive heart attack.

Mike Hegstrand was born on January 26th 1957, and made his pro wrestling debut in 1983 under the name Crusher Von Haig in Vancouver, Canada….. his stint north of the border was a short one, returning home to Minneapolis, Minnesota, his bigbreak was just around the corner. Mike and his pal Joe ‘Animal’ Laurinatis (who had also tried his hand at wrestling) were spotted by trainer Ed Sharkey whilst working as bouncers. Sharkeys gym would also give rise to such names as Rick Rude, Barry Darsow and Scott ‘Nikita Koloff’ Simpson.

It was Ole Anderson who can be credited with putting Mike & Joe together as a team, christening them Hawk & Animal: The Road Warriors, (influenced by the Mad Max movies), and the pair got over quickly in Andersons Georgia territory, with their leather attire, face paint, bizarre haircuts and destructive power offence. The spectacular finisher, Doomsday Device, clothesline from the top rope- off Animals shoulders was born, as was Hawks longstanding ‘Ohhhh What a Rush’ catchphrase.

The Warriors were guided onscreen by Paul Ellering, who later became their real life business manager, and skills at the bargaining table made the trio very wealthy men in the 80s. The Warriors were pushed with the oldest trick in the book, working short squash matches to mask their inexperience, in which their opponents would take major bumps to make them look devastating. The duo looked like unstoppable monsters who never lost clean, and no-sold their opponents offence. Hawk would even no-sell a piledriver (a sure finisher in the 80s) which drew large pops from the crowd, because no-one else was allowed to do it! Though they were supposed to be heels, the fans adored them, though less could be said of their babyface opponents who resented their popularity, selective selling and pushes without having paid their dues.

Worldwide fame and fortune also allowed Hawk to develop a huge ego, he and Animal were well known for bragging about their deafening crowd pops, to others in the dressing room, and Hawks outspoken nature got him into real life scraps with Randy Savage and Charles ‘Cold Scorpio’ Skaggs.

Nevertheless, the tandem left Georgia after 4 tag reigns, and were in such high demand, they juggled dates with the AWA, and JCP (in the times when promotions cooperated with each other). They hammered old timers Crusher & Baron Von Raschke for the AWA tag straps, and even when it was time to lose them 13 months later, outside interference was required, so not to damage their indestructible aura. The pair (with Ellering) debuted in Japan in spring 1985, earning a huge $10000 per week, (later upped to $16000) and (of course), won their matches in rapid order.

The Road Warriors then settled in JCP, and became prominent faces in the company. They won the first Crockett Cup in 1986, lifted the 6man tag belts (with Dusty Rhodes) and became so valuable to JCP, were offered $500,000 per annum contracts apiece, partly to dissuade them from jumping ship to Vince McMahons WWF. With the exception of Hogan Flair & Andre, it was more money that anyone else was making in pro wrestling at the time.

The Warriors were made to wait till late 1988 to land the NWA tag titles, as booker Dusty Rhodes liked to cast them as challengers (in typical Dusty Screwjob finishes), but by the time they defeated Stan Lane & Bobby Eaton to land the tag prize, Dusty had turned them heel (in a memorable spike attack on Dustys eye). However the heel turn was a mistake, the fans still loved them…. So they were turned face again after four months. After dropping the belts to Steve Williams & Mike Rotunda (in another screwjob finish to protect their aura) the duo meandered from one meaningless fued to the next….. had the pair seen better days? …. Jim Herd certainly thought so, and asked the Warriors to take a major paycut when their contracts were up for renewal. So offended at the offer presented, Animal & Hawk told Herd to stick it and negotiated a move to the WWF.

Known as the Legion of Doom (Vince didn’t want to confuse the Road Warriors with his WWF champion ‘Ultimate Warrior’) a fued with Demolition was the logical one to start with (Vince created a carbon copy Road Warriors tandem when he failed to sign the real thing years prior) though the fued came too late….. when original ‘Demo’ Ax was phased out with health problems, replaced by the inadequate Brian ‘Crush’ Adams…….and the ‘Real Deal’ swatted the pale imitators with ease.

Hawk & Animal made short work of Power & Glory at Wrestlemania 7, and downed the Nasty Boy for the WWF tag straps at the next PPV, Summerslam ’91. Though this completed the set of AWA/WWF/NWA tag titles (the only team to ever do so) , the Warriors were a slower, more ponderous team in the WWF. After dropping the Tag straps to Money Inc in early ’92, the pair returned at Wrestlemania 8 with Paul Ellering in tow ….. sadly the WWF creative team thought it was a good idea to align them with a Ventriloquists dummy (Rocko), which Hawk destested….. after a triumphant victory at Summerslam 92 in London, a disillusioned Hawk (whose outspoken attitude sourced his relations with Vince from day one) quit the WWF. Animal was understandably furious…. but was to take a wrestling hiatus to tend to nagging injuries, whilst Hawk toured Japan again.

Failing to find the same success without each other, the duo returned to WCW in January 1996 for a forgettable 4 months….. (leaving after a pay dispute with Eric Bischoff), returning for (yet) another run in Japan. Though Hawk left on bad terms in 1992, business was business (and a push from Bret Hart) the Road Warriors were brought back to the WWF in February 1997.

Many now saw the Roadies as being past their sell by date, yet they adapted to WWEs modern brawling style with commendable matches in a Chicago street match at WM13, a decent Summerslam match with the (abysmal) Godwinns, and featured in the breathtaking 10man tag finale at Canadian Stampede. They were rewarded with a 2nd WWF Tag reign in the autumn…. But were not impressed at dropping the belts a month later to Billy Gunn & Road Dogg (then seen as solo jobbers). Hawks tough guy aura was also broken when the ‘the New Age Outlaws’ shaved off his trademark Mohawk hair….. Hawk had never seemed more mortal.

The Roadies were repackaged with a new look and push (not that it ever changed much) at Wrestlemania 14 under the management of Sunny in a partnership that didn’t last…. nor did an attempt to fued them with Paul Ellering (who was looking after 4th rate Road Warriors impersonators D.O.A). The WWF were clearly running out of ideas for the ageing tag legends…. Vince Russo provided the kiss of death with the ‘Hawk is an alcoholic’ storyline (teasing Hawks real life struggle to battle the booze). For the first time a new LOD member (Droz) was brought in, though this made Hawk feel even worse…. Culminating in a storyline where Droz supposedly pushed a ‘Suicidal’ Hawk off the Titantron tower. A Hawk vs Droz fued seemed imminent, yet Hawk (who hated the angle and Russo) refused to take it further…. Resulting in LOD being removed off WWE screens for several months. They were given their pink slips in April 1999 when the Federation had its annual spring cleaning.

Living off their past accomplishments, the Roadies worked the Indie circuit….. Animal soon resurfaced in WCW at Sin 2001, Hawk was rumoured to follow, but WCW soon folded and the reunion never happened. The duo returned to the Indies, appeared for TNA and even Ted Dibiase religious promotion…… though their performances had slipped alarmingly, not helped by Hawks deteoriating health (he suffered a minor heart attack in 2000 and was later diagnosed with Hepatitis C). But Hawk continued to wrestle…. He had to…. Having blown a lot of his money during the good times. On May 12th 2003 LOD were given a surprise tryout in a loss to Kane & RVD… management were not impressed with their performance, nor were they happy that Hawk no-sold RVDs 5star Frog splash (old habbits never die).

During his career, Hawk was a hard-living Wildman who overdosed several times. He made an attempt to get clean towards the end… but it was too late. Feeling unwell, Hawk had decided to take a nap after spending the day packing and shifting boxes for a move to his new house. When his wife Dale discovered him hours later, he was dead. He was only 46. Like many of his peers, Rick Rude, Davey Boy Smith, Brian Pillman, Terry Gordy, Curt Hening… Mike Hegstrands body finally succumbed to the excesses he indulged in for most of his adult life.

Its been 6 years now since Hawk passed away, though his, and the Road Warriors legend lives on, the most successful tag team in wrestling history and likely to remain so.

Related Items
← Previous Story Sunset Flip: Options for Shane McMahon
Next Story → AS I SEE IT: Thoughts on Shane McMahon