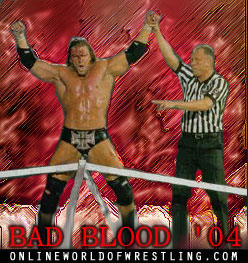 HEAT MATCH
Batista squashed Maven: This was a short match (I thought curtain jerkers meant to turn the crowd on?)

SINGLES MATCH
Eugene Dinsmore defeated The Coach!: Eugene got the win after hitting a Rock Bottom and using the People’s Elbow on the Coach! Garrison Cade then came out and Eugene started giving them weak Stunners..

WORLD HEAVYWEIGHT TITLE MATCH
Chris Benoit defeated Kane to retain the World Heavyweight title: Chris Benoit hit his Multiple German Suplex’s and followed up by nailing Kane with the Head-butt dive! Kane muscled his way out of the Crippler Crossface twice, but was eventually pinned by the champion..

HELL IN A CELL MATCH
Triple H defeated Shawn Michaels in almost 50 minutes!: Shawn Michaels jumped off a ladder with an elbow drop on Triple H through a table! Both wrestlers hit their finishers but they were both too exhausted to follow up with a pin attempt. Triple H hit a second Pedigree on Shawn Michaels and slowly rolled him over for the pinfall!