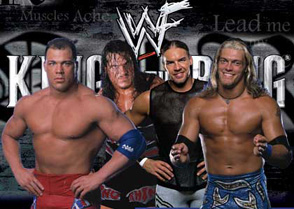 * Spike Dudley challenged his brothers to a Tag Team title match on the PPV.

* Shane McMahon arrived at the building, and was greeted by Test.

* Christain complained about his road to the King of the Ring.
* Edge told Christian to stop whining about it!

* The show was thrown over to Jim Ross & Paul Heyman, who broke the news of a rumor that had either Chris Benoit or Chris Jericho jumping to Shane McMahon’s WCW if one of them won the WWF title tonight!

IN THE RING
Diamond Dallas Page: DDP said that The Undertaker should be thanking him for only showing the PG tapes of his wife – claiming to have a “private collection” of Sara footage.

WWF TAG TEAM TITLE MATCH
The Dudley Boyz (Bubba & D-Von) defeated Spike Dudley & Kane to retain the WWF Tag Team titles: Spike introduced KANE as his surprise partner. The Dudleyz put the 3D on Spike for the victory. The Dudleyz then attacked Kane, but Kane put Bubba through the table!

RINGSIDE SEGMENT
Diamond Dallas Page: As Diamond Dallas Page sat at ringside, more footage aired of DDQ as he conducted more personal business! DDP demanded for The Undertaker to come out to the ring immediately!

KING OF THE RING TOURNAMENT FINAL
Edge defeated Kurt Angle: Christian distracted the referee when Edge was tapping out to Kurt’s ankleLock. Shane McMahon appeared and speared Kurt Angle! Edge got up and hit the Impaler for the win! Your 2001 King of the Ring.. EDGE!!

BACKSTAGE INTERVIEW
Chris Benoit: Tazz asked Chris Benoit if there was any truth to the WCW rumors flying around. Benoit just said that was a very good question.

BACKSTAGE SEGMENT
“King of the Ring” Edge: Jonathan Coachman asked Edge how it felt to be King of the Ring. Christian came in, and told Edge if he only came to the ring to help him earlier! In other words, Edge failed to help Christian in his first round match with Kurt Angle.

WWF LIGHT HEAVYWEIGHT TITLE MATCH
Jeff Hardy defeated X-Pac to retain the WWF Light Heavyweight title: X-Pac nailed Jeff with an X-Factor, and the referee counted to three! The referee then realized Jeff had his foot on the rope, so the match was restarted. Jeff climbed up to the top rope, hit X-Pac with a Swanton Bomb to retain his Light Heavyweight championship!

BACKSTAGE SEGMENT
Stone Cold Steve Austin & Commissioner William Regal: In Commissioner Regal’s office, Stone Cold called Vince McMahon and told him of the WCW/Benoit/Jericho rumors. Regal got on the phone and backed up Austin’s claims. Stone Cold grabbed the phone and told Vince he needed him, and that he could make it in time from Greenwich. Austin then hung up after thanking Vince.

RINGSIDE SEGMENT
Diamond Dallas Page + The Undertaker: More footage aired of DDP as he conducted personal business, causing DDP to fume with anger. DDP climbed over the security walls and entered the ring again. DDP demanded that The Undertaker show his face immediately! After more goading, and more embarrassing footage of DDP was shown, it was revealed that it was Sara who had aired the footage! She told DDP that it was time for him to become famous! The Undertaker came out slowly and the two begin to brawl, with no referee in sight. Sara was there taping every moment with her camera. DDP jumped over the top rope, and then he jumped the barricade and made a hasty exit from the building! Undertaker & wife Sara celebrated in the ring!

STREET FIGHT
Kurt Angle defeated Shane McMahon: This was a brutal BloodBath, and incredible match. Kurt Angle grabbed a piece of lumber and started pounding on Shane, and then propped up the board and used it as a platform! Angle & Shane stood on the platform on the top rope and Kurt Angle-slammed Shane into the ring, where Kurt pinned Shane to win the match! After the Street Fight ended, the crowd gave Shane McMahon a standing ovation as he left the ring.

PARKING LOT SEGMENT
Stone Cold Steve Austin: Stone Cold awaited the arrival of Vince McMahon when he was informed that he needed to go to the ring for his match.

WWF HEAVYWEIGHT TITLE TRIPLE THREAT MATCH
Stone Cold Steve Austin defeated Chris Jericho and Chris Benoit to retain the WWF Heavyweight title: At first, Jericho & Benoit gang up on Austin, but soon Jericho & Benoit were fighting each other. Outside the ring, Stone Cold grabbed a steel chair, and went after both challengers. WCW champion Booker T entered the arena and slammed Stone Cold through the Spanish announce table! With all three men motionless in the ring, Austin crawled over to Chris Benoit and covered him for the 1-2-3 to win this incredible! 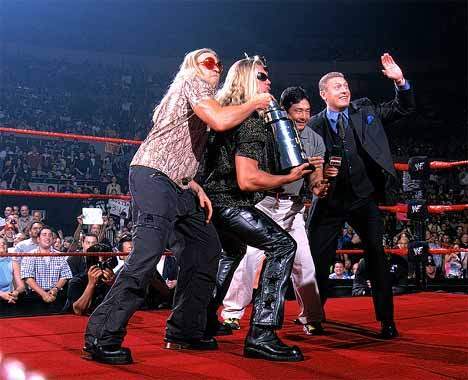