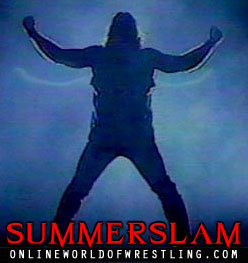 GRUDGE MATCH
Montel Vontavious Porter defeated Jeff Hardy: Late in the match, Jeff Hardy was on a roll and went for his trademark Swanton-bomb off the top rope. Shelton Benjamin showed up in street clothes and Hardy saw him out of the corner of his eye and decided to jump onto Benjamin at ringside instead of following through with the Swanton. Hardy then went for the Swanton, but MVP moved and Hardy landed on his back in the middle of the ring. MVP knocked Hardy out with the Drive-by kick to the head scored the pin to win the match. MVP made eye contact with WWE United States champion Shelton Benjamin on his way out.

BACKSTAGE INTERVIEW
Maria Kanellis & Santino Marella & Beth Phoenix: Santino Marella made sure to mention that he was obviously doing better than Maria – his former girlfriend. Maria pointed out Santino’s “unibrow” and Santino said that he grew it because the Glamazon likes it. Santino ended the interview and walked off but Beth Phoenix stared into Maria’s eyes and clarified “he’s all mine!”

WINNER TAKE ALL MATCH FOR THE WWE WOMEN’S & WWE INTERCONTINENTAL TITLES
Glamarella (Santino Marella & Beth Phoenix) defeated Kofi Kingston & Mickie James to win the WWE Intercontinental title and WWE Women’s title: Mickie James planted Santino Marella with an Implant DDT. Beth Phoenix finished off Mickie James to win the match while Santino was unconcious. Beth carried Santino out on his shoulders, with Santino holding both belts up proclaiming, “WE DID IT!”

IN THE RING
“The Heartbreak Kid” Shawn Michaels & his wife Rebecca (formerly known as Nitro Girl “Whisper”) + “Y2J” Chris Jericho: Shawn Michaels was there to announce the results of his doctor’s appointment and let the fans know what the status of his wrestling career was. Michaels stood with his teary-eyed wife, who looks like a matured Tara Reid. Michaels got to the point, saying with his eye injury and all the other injuries in his career, the doctor recommended that he walk away from the wrestling business. Michaels said that he and his family have decided to listen to the doctor’s advice for the first time in his life. Michaels said he had a wonderful career in the WWE, and regretes nothing. Michaels his twenty-year career being the Heartbreak Kid, being known as the guy that screwed Bret Hart, the guy that formed Degeneration-X, the guy who transformed the Ladder match, the guy that lost his smile, and the guy who retired Ric Flair. But from now on he will be known as a full time husband and father. Michaels said it might not be a popular decision but ultimately it’s the best decision. Chris Jericho interrupted wearing a suit and tie. Jericho said, “no, I’m not going to let you go out on your own terms.” Jericho wanted Michaels to admit to his face that he is leaving the wrestling business because of him. Michaels told Jericho to get out of the ring. Jericho pressed on saying Michaels was retiring because of what he did to him. Jericho said he deserves to hear Michaels admit that he (Jericho) put him out for good. Jericho said nothing else matters because Michaels’ epitaph will read that Shawn Michaels had to leave the wrestling business because of Chris Jericho.” Michaels said he would tell his wife and kids that the reason he can’t wrestle any more is because of a vile selfish human being. Michaels told Jericho to home and tell his wife and kids that dadd will never EVER be Shawn Michaels. They had an intense stare-down until Rebecca pulled on Shawn’s arm. Jericho tried to sucker punch Shawn Michaels, but inadvertantly punched Rebecca in the face! Was it intentional? Michaels got down to check on his wife, and then stared at Chris Jericho as he backed up the isle with a freaked out expression on his face. Medical people ran down to the ring to check on Rebecca, who eventually sat up and embraced her husband. Shawn Michaels looked like he was on the verge of an angry mental break-down. They did a close-up of Rebecca’s face as she walked out under her own power and her upper lip had already swollen.

ECW WORLD TITLE MATCH
Matt Hardy defeated ECW World champion Mark Henry w/Tony Atlas by DQ: Matt Hardy managed to hit the Twist of Fate 30 seconds into the match, but Tony Atlas pulled Hardy out of the ring during the pinfall attempt. The referee called for the bell and disqualified Mark Henry, and the crowd was not happy with the finish. Jeff Hardy ran down and attacked Tony Atlas, giving him a Swanton-bomb on the ringside floor! The Hardy Boyz went after Mark Henry and gave him a double suplex on the floor at ringside. And the crowd goes wild.

WORLD HEAVYWEIGHT TITLE MATCH
C.M. Punk defeated John Bradshaw Layfield to retain the World Heavyweight title: At one point they bumped heads coming down from a spinning back-kick from Punk onto JBL which caused JBL to bleed from the head. A short time later, C.M. Punk knocked JBL silly with the Go-To-Sleep and scored the pin to retain his championship. The match was great but seemed too short and may have been stopped early – but I could be wrong.

FIRST TIME EVER MATCH
Batista defeated John Cena: Both John Cena and Batista got loud ovations during their entrances – maybe not as loud as they had hoped for though. Cena got booed, and Batista was mostly cheered. Late in the match, John Cena hit an F-U, but Batista kicked out! Batista caught John Cena coming off the top rope and planted him with a bone-crunching Batista-bomb, and Cena miraculously kicked out of it! This denial put Batista in some kind of trans. Batista finished John Cena with a second Batista-bomb to win the match and earn very important bragging rights!

HELL IN A CELL MATCH
The Undertaker defeated Edge: Edge came through the curtain with a demented look on his face, actually looking forward to entering the Hell in a Cell. During the entrance of the Undertaker, Edge was waiting in the ring with an intense facial expression but was not intimidated by the Undertaker like most people in the past. A few minutes into the match, La Familia (Vickie Guerrero, Chavo Guerrero, Bam Neely, Zack Ryder, and Curt Hawkins) were shown watching the match on a monitor backstage. They introduced the ring-steps into the match, and used it as a weapon against each other. Edge found two tables under the ring, and set one up on the floor, and stacked the second one on top of it. A few minutes later, a table was set up in the ring and the Undertaker was placed on it. Edge, the master of the TLC, jumped off a ladder and put Undertaker through the table with a steel chair! A few minutes later Edge speared the Undertaker through the wall of the Cell, which fell over and nearly destroyed good ol’ Jim Ross! The Undertaker was cut on the forearm but got up and started pounding on Edge outside of the cell. Edge ran accross the ECW and SmackDown! announce table and speared the Undertaker through the RAW announce table! Eventually the ended up back inside the cell. The Undertaker tried to give Edge the Last Ride on top of the ring steps, but Edge slipped out and speared Undertaker down to the mat! A minute later, the Undertaker delivered the Last Ride Power-bomb, but Edge kicked out! They continued to battle, and struggled up to the top rope, where the Undertaker choke-slammed Edge down through the two tables that were stacked at ringside. The Undertaker grabbed an TV camera and smashed it over Edge’s face! The Undertaker put Edge’s head on a flattened chair and delivered a vicious conchairto to the head! The Undertaker picked up Edge and planted him with a Tombstone Pile-driver for the 1-2-3 to win the HELL IN A CELL! La Familia was shown backstage applauding the Undertaker’s victory, or more specific, Edge’s demise. As Edge was leaving, he noticed on the big screen that Edge was still moving so he spinted back to the ring to inflict more damage. Undertaker set up a ladder and put Edge up on the third rung, while Undertaker retreived a second ladder from under the ring. Undertaker climbed the second ladder and told Edge, “NOW YOU ARE GOING TO DIE!” and choke-slammed Edge off the ladder and thrust Edge through the floor of the ring! Undertaker worshipped the hole in the ring and flames started shooting out! Jim Ross ended the PPV by proclaiming, “The Undertaker has sent Edge STRIGHT TO HELL!” Cool ending.