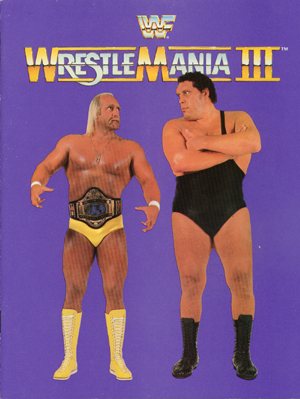 WWF INTERCONTINENTAL TITLE MATCH
Ricky “The Dragon” Steamboat w/George “The Animal” Steele defeated Randy “Macho Man” Savage w/Elizabeth to win the WWF Intercontinental title: This match is considered by many to be one of the greatest, if not THE greatest, professional wrestling match of all time!

WWF WORLD HEAVYWEIGHT TITLE MATCH
Hulk Hogan defeated Andre the Giant w/Bobby “The Brain” Heenan to retain the WWF Heavyweight title: Hulk Hogan slammed Andre The Giant on his way to defeating the eighth wonder of the world in one of the most famous matches of all-time!

WRESTLEMANIA III IS IN THE BOOKS!