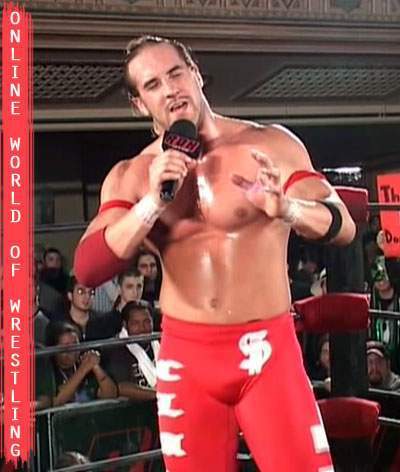 Claudio Castagnoli joins Jack, OIB and Barbie Richards and talks about the upcoming Plymouth, MA show on September 10th. Claudio and Chris Hero will be wrestling against Colt Cabana and El Generico. To get tickets for the show or any future shows go to http://www.www.gofightlive.tv

Claudio is very excited for the Glory By Honor IX show on September 11th. The only way to watch the show is on http://www.www.gofightlive.tv since the tickets have been sold out for over a week. Claudio believes that it is a good idea to use the iPPV format instead of the pay per view system.

Claudio thought that the Big Bang show back in April was a great show and felt he and Hero and had a great match with the Briscoe’s. Claudio is happy that the Briscoe’s resigned with ROH as they are good opponents for them.

AJ calls in and talks about Claudio’s match with Mike Quakenbush and the impressive finish to the match. Claudio admits that they stole the finish from Japan. Quakenbush did the finish at TPI previously and says that he thinks they shocked everyone by doing it as it is a very difficult move to pull off.

Jack asks about Claudio’s reaction to wrestling Haas and Benjamin. Claudio is very excited and would like to see them remain in ROH depending on how they do on Saturday!

Claudio says that he and Hero get along better now then they did three years ago when they split up. He met Hero in 2002 when Hero back to Europe to teach a wrestling clinic. Claudio moved in with Hero when he moved to the United States. He first teamed with Hero in CZW against Chris Cash and JC Bailey.

Claudio notes several tag teams that he enjoys watching that included the Legion of Doom, Steiner Brothers, Regal and Taylor, Arn Anderson and Tully Blanchard. Claudio jokes that he is the modern day Mable as KOW are the modern day Men on a Mission!

Christopher Daniels is mentioned and Claudio puts over Daniels as a great wrestler and a great backstage presence for the company.

Claudio says that Ric Flair and Bret Hart both liked the ROH product and gave their advice as to what they could do better in the future.

OIB asks if there is a team past or present that Claudio would like to work with. Claudio would’ve liked to work with the New Age Outlaws and feels they would have a great match with all the great tag teams in the business.

Claudio designs and makes his own ring gear.

Jack asks Claudio about the WWE development deal that fell through. Claudio doesn’t have any idea why the deal fell through and the man who got him hired, Nova, doesn’t know what happened either.

Jim Cornette is brought up and Claudio puts Cornette over a genius and says that Cornette really helps out the company.

Nigel McGuiness is brought up and Claudio says Nigel is a great wrestler but just isn’t being used well by TNA currently. Claudio agrees that Nigel is the total package.

Jack plugs the ROH Glory by Honor IX iPPV that can be seen on http://www.www.gofightlive.tv

For more information on the ROH Glory By Honor IX show go to http://www.www.rohwrestling.com

NOS asks what he has to do to become more European. Claudio tells NOS to dress with style, drink coffee and look great. A well groomed moustache would be beneficial.

Claudio watched WWE when he was a child. Claudio names several feuds from WWE during the early 1990’s. Claudio did not take the tie gimmick from I.R.S. He instead got the idea from teaming with a guy named Homeless Hammer. Claudio thought it would be a interesting idea to have a rich man teaming with a homeless man. Claudio says that Homeless Hammer sure did wrestle like a homeless man!

Jack asks what does Claudio think of being on Botchamania. Claudio loves being involved with the series and knows that he is on their several times tripping over ring steps.

ROH has two events this weekend. On September 10th, ROH will be in Plymouth, MA which will see Tyler Black taking on Christopher Daniels. The Kings of Wrestling will defend the ROH World Tag Team Championships against Colt Cabana and El Generico.

For more information on IYH Wrestling Radio go to http://www.www.inyourheadonline.com