Home / WWE / Roman Reigns is once again on top!

Roman Reigns is once again on top! 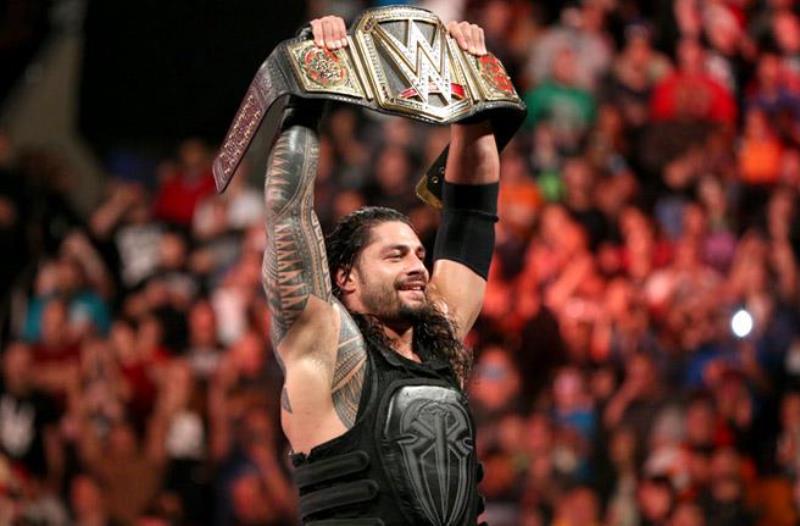 Tonight on WWE’s Monday Night RAW Roman Reigns defeated WWE world heavyweight champion Sheamus is a “job vs. title” match to win the title!  The match was booked by Vince McMahon himself!

Here is the full recap:

We come back and Vince McMahon makes his way out to watch the main event from ringside. WWE World Heavyweight Champion Sheamus is out first as Vince stands and applauds him. Roman Reigns is out next through the crowd. If Reigns loses the match, Vince will fire him.

We get formal ring introductions and they go at it to start. Sheamus still has several marks on his back from TLC. Reigns get dumped to the floor early but comes back in. Sheamus with the rolling senton for a 2 count. They go back to the floor and Sheamus sends Reigns into the ring post. Sheamus slams Reigns on top of the announce table as we go to commercial.

Back from the break and Sheamus has Reigns down on the mat. Reigns finally powers out but they’re both down. They get up and trade huge shots. Reigns with clotheslines and a big right hand off the ropes. Reigns ends up hitting a Drive By. They come back in the ring and Reigns goes down in the corner after Sheamus nails him. Vince yells at Sheamus to get him. Sheamus goes to the top but Reigns climbs up with him. Reigns hits a super Samoan Drop from the second rope for a close 2 count.

Sheamus fights back and hits a high knee on the apron and rolls Reigns up for a close 2 count. Sheamus with the Irish Curse backbreaker and a 2 count. Sheamus goes for White Noise but Reigns counters. Reigns with the one-arm sit-down powerbomb for a 2 count as Vince almost loses it at ringside. Sheamus blocks a Superman punch and powerbombs Reigns for another close 2 count. Vince is up out of his chair again. Sheamus keeps control and goes for the Cloverleaf. Reigns fights it but Sheamus gets it locked as Vince looks on.

More back and forth now. Sheamus runs into a Superman punch for the three count but Vince pulls the referee to the floor right before the 3 count. Reigns was busted open by a headbutt. Reigns is distracted, allowing Sheamus to send Reigns into the ring post. Vince sends the referee back in the ring as Sheamus hits White Noise but Reigns still kicks out at 2. Vince talks with the referee on the apron. Sheamus kicks Reigns out of the ring. Alberto Del Rio runs down but Reigns nails him. Rusev drops Reigns. Rusev rolls Reigns back in. Reigns hits a Superman punch, sending him off the apron. Reigns ducks a Brogue Kick. Reigns hits a Superman punch on Vince, leaving him lying on the apron Sheamus nails a Brogue Kick but Reigns still kicks out at 2. Sheamus goes for a Brogue Kick but Reigns spears him for the win and the title.

– After the match, the crowd goes nuts and Reigns grabs his title and begins to celebrate. We go to replays. Reigns kicks Vince’s limp body off the apron and continues to celebrate. RAW goes off the air with the new WWE World Heavyweight Champion clutching his title.