Home / Podcasts / Scott Hall talks about going back to work

Scott Hall talks about going back to work 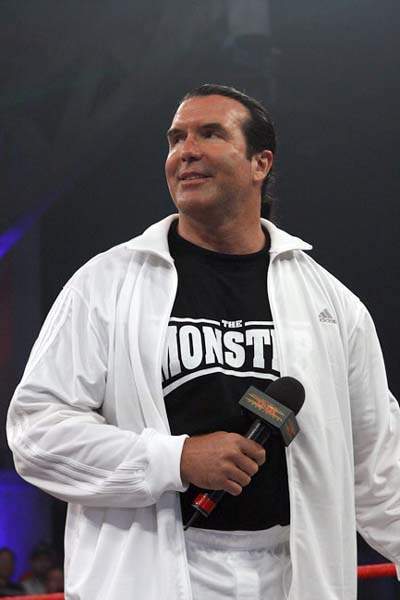 Scott Hall was the guest on the February 10th, 2010 edition of In Your Head Online Radio available at www.InYourHeadOnline.com hosted by Jack E. Jones, Oneinchbiceps and Barbie Richards.

Scott Hall joins the gang to open the show, so there is no need to wait to hear from the Bad Guy!

Hall puts over AJ Styles and Matt Morgan as being great talents. However he believes that there are plenty of guys that aren’t that level. Hall struggled with being able to become a character back in the AWA, in the early days. Hall believes that people need to have a wrestling name and gimmick to become popular in the United States.

Hall says that Vince McMahon didn’t like the Razor Ramon gimmick, but they did it and the gimmick got over. Hall believes charisma is either something you have or you don’t.

When he got back into WCW and went back to using his real name and he felt comfortable as he went their with Kevin Nash. . Hall goes into the story of how he and Kevin Nash went to WCW and how much money they made and how they both were able to arrive in WCW within one week of each other. Hall mentions how WCW didn’t name them for several weeks. They were just called the Outsiders.

The WCW office were trying to get something similar to Razor, but Hall didn’t like anything they came up with. Hall already had people chanting his name, so he wasn’t worried about heading to WCW. He went to WCW for the guarantee money that came with it.

Hall wasn’t interested in going back to TNA for January 4th, 2010. He got a phone call from Hulk Hogan and Eric Bischoff and was flattered by having them call him saying that they needed him for this. Hall believes that if TNA goes live each Monday that Vince will be in trouble because he has watched the product and it isn’t any good.

Jack asks Hall how TNA is different from his first run in TNA. Hall mentions that TNA was owned by different people so it was a different product.

A caller asks about the incident between Scott Hall and Jerry Sags where Hall hit Sags with a chair and Sags claimed his career was ended earlier then he wanted. Hall goes into the story and explains what happened, so you can find out what happened once and for all! The situation between Hall and Sags took place back in 1997, and according to the story things got heated!

Jack asks Hall what he is going to be doing at the pay per view, and actually tells Jack that he is doing a run in! Hall goes over what will be shown on television tomorrow and doesn’t know much about the angle. He thinks the angle will be exciting, though. Hall puts Bischoff over as a smart guy and a guy who writes some great television.

Hall believes that Eric Bischoff’s on air work has gotten better and that everything he has been doing is great for TNA. Hall likes that with Bischoff he doesn’t get the “boss” feel but rather one of the boys type of feel. While with Vince McMahon it was always a boss feel.

Hall says that he doesn’t have a computer as he doesn’t like to read the bad things written about him as they “hurt my feelings”.

A caller asks if Hall was surprised at the reaction they got from the fans when he returned. Hall says that it felt great to get booed. Hall says that it is horrible for the fans to be silent. Hall reiterates that their goal is to get on Monday’s and to stick up Vince McMahon’s ass, again! Hall says that he doesn’t really get nervous, but rather got a adrenaline rush before his return on January 4th.

Another caller asks Scott Hall about a wrestling cruise. Hall says that he agreed to do it if it actually happened because it was for charity.

At this moment, the crew loses Scott Hall for a moment. It takes a few minutes, but Scott Hall DOES return.

A caller named Maggie talks to Scott Hall about a new website for Scott Hall. Hall says he wants to reach out to the fans but can’t sit around typing or doing any sort of blog. Hall puts down the dolls that he got in WCW as people had said that the doll “sucked”. Hall believes that McMahon changed the industry by making it more of a marketable based industry. Hall never collected dolls personally as he never had time to do that kind of thing.

Scott Hall tells a story of going to Bret Hart’s house and says that his house is basically a shrine of the Hitman. It is a rather funny story, and has to be heard. Hall really liked Bret Hart but they are just not the same person.

Jack mentions Sid Vicious and Scott Hall says that he loves Sid and his family. Hall believes that Sid is the “hottest free agent today”. Hall also says that Sid is a “attraction and star”. Jack says that he saw Sid wrestle last year and that he was in great shape.

Jack asks about Genesis and why he didn’t compete. Hall says that he pulled his groin and that he didn’t want to “half ass my return”. Hall also says that Bischoff and Russo have got some cool things lined up. Hall admits that TNA sucked previously and didn’t want anything to do with them, but they have “turned the corner.” Hall is also not afraid to rattle McMahon’s cage once again.

Hall talks about being in the same state as the WWE during a Monday night war. Hall tells the story about the HHH showing up in a tank. Hall thought it was cool that the WWE did the New Razor Ramon gimmick. Barbie asked if Hall wanted to meet DX, but they were discouraged to do so by the legal team. From WCW.

Hall talks about how Turner higher ups prevented WCW from keeping up with WWE when they went on a more risqué type of television. Hall’s phone cuts off, again so Jack attempts to get Hall back on the phone.

Be sure to watch Scott Hall this Thursday on Spike TV at 9pm ET. Hall will also be on TNA’s next pay per view Against All Odds this Sunday starting at 8pm ET.

For more information on Scott Hall go to www.scotthalltv.com

To listen to the full In Your Head Interview head on over to www.InYourHeadOnline.com and you can also check out their 5+ year archive which include interviews from Kevin Nash, Sunny, Chris Jericho, Mick Foley, Paul Bearer, Sid Vicious and many more plus live weekly Wednesdays at 8:05PM Eastern.