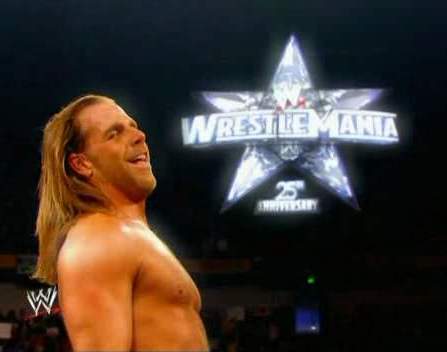 Jack and the OneInchBiceps were joined by a very special guest tonight: non other then “Mr Wrestlemania”, ”The Showstopper, The Heart-Break Kid” and now WWE’s first inductee to the Hall of Fame, class of 2011 Shawn Michaels.

Jack welcomed such a honorable guest to the show and Shawn Michaels was happy to be here. The first question Jack asked how did it feel to be the first inductee into this year’s WWE Hall of Fame? Shawn goes it was very flattering and after Jim Ross used to mention on commentary so many times “first ballot hall of famer for sure”, when you are done with the business and if they don’t put you in straightaway they might not like you but if not then you have done something very well. Shawn goes he’s not sure if he earned it or it was pushed by the WWE, Jack said he definitely earned it.

Jack then asked who he would like to induct him at the ceremony? Shawn goes it’s a tough question, but the naturals would be Triple H or Kevin Nash, however it’s hard for him to be out of the performance and maybe someone like Bret Hart or Ric Flair do it. He’s not sure whether to makes his buddies do it or be Shawn Michaels of wrestling. He hasn’t made the decision yet but has been bothered by allot of people including the WWE and has to come with a answer pretty soon. He may need to narrow it down from two to one, but hasn’t done it at the moment.

Jack asked that as Shawn Michaels one of his names is “Mr Wrestlemania” and with Wrestlemania 27 coming up does it bother him he’s not on the card for this year? Shawn goes it was a big burden doing many Wrestlemania events, he goes competing to be in the best match and when you get older its harder and becomes more of a burden. Shawn goes he is looking forward not to be running around all day before the event, he mentioned he doesn’t settle until he is in the ring and normally goes blank during hall of fame time which he calls “wrestlemania mode”. He feels excited about watching it as a fan then a person as part of the show, something he has never done. He doesn’t miss the opportunity of doing it anymore.

Jack then asked how nervous was he during last year’s Wrestlemania 26 knowing it was his last match? Shawn goes he was nervous, but felt it was time. He normally goes in the ring and does what he does best, but last year he never sweat or felt tired, which is something that has never happened before. He felt it was a chore last year and it went brilliantly as a match and they did everything which was expected, but was not as free-flowing as he normally is, he felt this was a red-flag he felt last year’s match it was time to wrap up his illustrious career.

OneInchBiceps asked a question: What does it feel like when people such as The Miz call there partner the “Marty Jannetty” of the tag team? To Shawn, any references off the Rockers is something every young guy does and it’s something he did when he joined as a young wrestler as well, by making fun of them experienced guy in the company. He takes it as a compliment and it’s very pivotal to young guy’s career. He thinks it’s good and enjoys it when mentioned. It’s a good thing as it creates a moment for a long time of something they did and a big effect on tag team wrestling, which The Rockers did.

Jack asked another question: When Kevin Nash and Scott Hall joined the WCW, were there any rumours Shawn would follow them? Shawn goes he had some bad times and would want to be with his friends whenever, however leaving was not a simple process at all. People talk about leaving and going back making it seem easy, however he goes you have to be allowed to leave which is rare as you are under contract, and if you are released it means the company are not happy with you which doesn’t look good either. He had some emotions at the time but his heart was with the WWF and it was not the right thing to do. There was a thought of going, but not realistic and he wanted to be happy and successful in the WWE which eventually happened eventually.

OneInchBiceps had a question from the board: MrsBigRedMachine asked did he have any problems with the “god” storyline v McMahons at Backlash 2006? He goes it was silly and over the top. He admits it’s a big part of his life but it was crazy for what they did, but he never took it offensively. It’s something that will come up with everyone, because someone will always be there to criticize to something related to you whether it’s your job, parenting skills, your role as a husband, religion.

Jack’s last question: Is the Undertaker’s streak coming to a end? Shawn goes he’s not sure but all good things must come to a end, but if it didn’t happen with him it won’t now .Shawn goes he was excited about the induction, the ring and he will cherish the moment when inducted.

Jack thanked Shawn Michaels to be on and Shawn said it was a pleasure to be on and thanked them for the time.

Things To Check It Out
-The Shawn Michaels Wrestlemania XXVII Raffle for 2 all expense paid tickets to Wrestlemania and your chance to meet HBK himself. For more information please visit:
http://www.theshawnmichaels.com
-Next week InYourHead welcome “The Hands of Stone” Ron Garvin & Thunderfoot #2 Joel Deaton and its “The Internet Icon’s” Handsome Jack E Jones 400th interview!
-Check out youtube.com/jackIYH for past interviews.
– Bob Collings http://wrestlingrecaps.wordpress.com/ (Over 840 shows have been recapped including WWE, WCW, ECW, TNA, ROH and other independent companies!)
-Join the IYH fan message board http://inyourheadboard.proboards.com/index.cgi
– for full audio please visit:
www.inyourheadonline.com
Podcast:
http://inyourheadwrestling.podomatic.com/
Subscribe in iTunes:
http://itunes.apple.com/podcast/neal-jones-podcast/id385508745