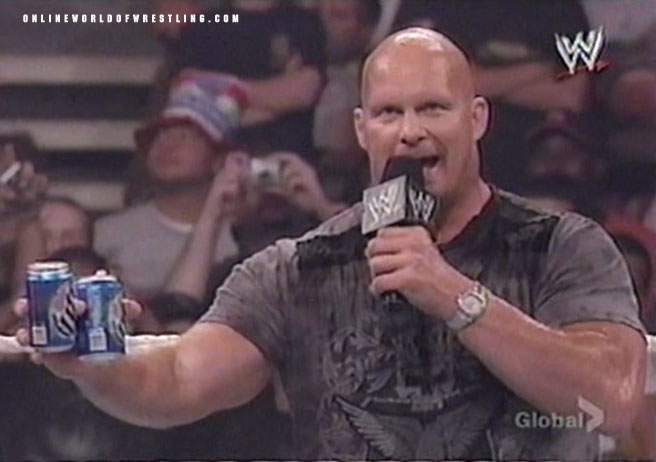 “Stone Cold” Steve Austin Discusses The Latest On The Rumors Of His WWE Return, His Commitment To The Movie Industry Since Leaving World Wrestling Entertainment, The Release Of “Hunt To Kill,” How Certain Aspects Of The Film Mirror What He Has Gone Through In His Personal Life, A Sneak Preview Of His Newest Picture (“Hangar 14”), Who He Feels Inspired The “Stone Cold” Promos The Most, Being “Handpicked” By “The Hitman” For Bret Hart‘s Comeback Match At The 1996 Survivor Series, & The Legacy Of Eddie Guerrero

WWE Hall of Famer & former WWE Champion “Stone Cold” Steve Austin was one of the featured guests on this week’s live edition (11/15/10) of the award-winning Monday Night Mayhem. You can feel the “MNM Fall Tour ’10” every Monday evening (at 7PM ET/6PM CT), exclusively on The Monday Night Mayhem Radio Network (www.MondayNightMayhem.com).

“The Texas Rattlesnake” joined The Big Mosh & “The Chairman of the Board” Todd Vincent for his highly anticipated return to “Your Home of Wrestling Radio” (for the first time since MNM’s WrestleMania XXVI Countdown Special) to preview the release of his new film “Hunt To Kill,” which is now available in Windows Streaming Media or via the official MNM Podcast on iTunes:

How he was approached to appear in Hunt to Kill & how certain aspects of the film mirror what he has gone through in his personal life: “We were doing an outdoor scene for another movie, and we were looking around. It was a rainforest similar to one we shot ‘Hunt to Kill’ in, and my manager says ‘Hey man, this could be your next movie. We’ll call it ‘Hunt to Kill,’ and we just came up with the title right there. We hired a writer to write it. Obviously, it was tailored to me. I grew up hunting, fishing, riding ATV’s, shooting bows and all the weapons, and it’s just what I do. So we wrote the story around me. I am in my element. As far as my relationship with my daughter in the movie, I’m trying raise her as a single father, and she really doesn’t know me, and I really don’t know her. From my 15 years on the road, I’ve kind of been in a similar situation with my two daughters. Sometimes I’ve been gone for too long, so I kind of drew from that, and that was one of things enjoyed about the movie.”

His commitment to movies since making the transition from World Wrestling Entertainment: “I’m having fun, and I’m getting a chance to be more selective with the material. Sometimes when you’re just looking for a start, you’re just looking for any kind of vehicle to jump in. Now I can be picky and choosy about what I jump in and have more control over what I do. Back in the day when I jumped in that business I was greener than the grass, and it was a lot of work and dedication. I turned into a hell of an in-ring performer and sold a lot of tickets. My goal in anything I’ve ever done, from my athletic background in high school trying to be the best athlete that I can be, you’ve got to apply yourself. I don’t care what you’re doing, if you’re going to do something, you want to be the absolute best that you can be. With that being said, I’m not trying to be Daniel Day Lewis or Marlon Brando, but I’m damn sure trying to be the best actor that I can be and find the combination of what works for me as far as success in the movie industry.”

What is was like being “handpicked” by Bret “The Hitman” Hart for his comeback match at the 1996 Survivor Series at Madison Square Garden & why the build-up and the match itself ranks so highly on his personal list of his favorite matches of all-time: “That’s probably my #3 favorite match of all-time, behind WrestleMania 13 with Bret Hart and X-Seven with The Rock, which was absolutely tremendous. That Survivor Series match and the promos leading up to it, I was basically handpicked by Bret for him to make his comeback after some kind of treatment on his knee. He was making his comeback. I was starting to gather a lot of momentum as ‘Stone Cold,’ but still in the heel vain. It was an old-school wrestling match. I watched that match probably three months ago doing cardio in my garage. The ring was mic’d different. Madison Square Garden has that aurora, that feeling about it, and that atmosphere. That was a bad-ass match, and I think very highly of that match, and it was just that, a wrestling match.”

What he remembers the most about working with/being around Eddie Guerrero & what he feels Guerrero’s legacy will be in the business: “I was always in awe of everything that Eddie did. I could watch a match with a normal wrestling fan, and because I’ve been in the business so long and because what I lived, and breathed, and understand about the business, I could look at the little things that Eddie did, and just some of his body language, and the charisma he had in the ring. I’m a huge Stevie Ray Vaughn fan, and when you watch and listen to Vaughn play the guitar, he is that instrument, and it plays through his heart. He’s just endless and flowless. He never stops creating, and to me, that’s what Eddie Guerrero was in the ring. He just never stopped, and everything came so natural to him. When he was in a ring, it seemed like that was when he was at his happiest. He was a true bad-ass hand in the ring and a superstar. I’ve got a ton of respect for Eddie Guerrero, and he is on my list of all-time most gifted and talented workers that ever got in the ring.”

After the rumors have been swirling for the past several weeks of Steve returning to the WWE for a comeback/final match, along with him potentially guest starring on a forthcoming edition of Monday Night RAW, what does this message & demand by the fans tell Steve: “First of all, I heard the rumors that I was going to be in New York, but I know nothing of it, because I plan on being deer hunting at my ranch in South Texas. I will say this: I’m proud of my wrestling career. Wrestling is what I wanted to do with my life. I love the industry back then, and I still do today. Above and beyond that, I love my wrestling fans, and I broke and busted my ass to put on a good product that they could enjoy, and that’s what I enjoyed doing. My style was what I lived, and thrived, and loved doing. If it wasn’t for my wrestling background, I wouldn’t be where I am today and had the opportunities that I’ve had. Those are rumors. I can’t say that it’s true, because like I said, I’m going to go make a movie, go deer hunting, and then go make another movie. I wish I had some kind of answers to that. I think people want to see real hardcore entertainment and stop the sugar coating. I’m not saying I’m the only one that can do it, because there are a lot of guys that can do it, but it doesn’t need to be so candy coated.”

More is contained in “Stone Cold” Steve Austin’s return to The Monday Night Mayhem Radio Network, including his candid thoughts & comments on who inspired his “Stone Cold” promos the most, why he would abolish scripted promos (if a return to the business presented itself), what he has learned in the world of acting over the past several years from both Sylvester Stallone and Eric Roberts, other genres of the movie industry we could see him in besides action films, a sneak preview of his newest picture (“Hangar 14”), where he would like to see himself in Hollywood five years from now, plus so much more! Follow the travels of “The Texas Rattlesnake” on Twitter (at www.Twitter.com/SteveAustinBSR). And remember: Your chance to win a copy of “Hunt to Kill” on DVD comes by listening to this week’s all-new edition of Monday Night Mayhem and by following “Your Home of Wrestling Radio” on Twitter (at www.Twitter.com/FeelTheMayhem).