Home / Columns / Suset Flip: Things I like about TNA

A couple of months ago, I wrote a column about “Things I Like About WWE”. This week I am going to talk about TNA wrestling and things I like about the promotion. Much like WWE, TNA can be much better. WWE’s list had about four things total that I liked about it. Let’s see if TNA can beat that number.

Tag teams: TNA has real tag teams. Not only do they have real tag teams, they have good tag teams. While there may be some that people do not like, such as The Band, there are also great ones like the Motor City Machineguns, Beer Money, Team 3D, and others. 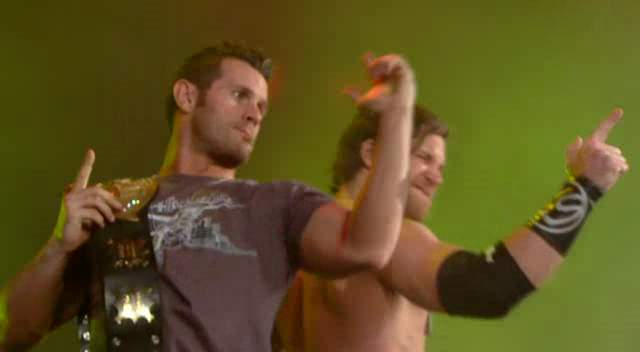 Fast paced X-Division Matches: I understand that since Hogan and Bischoff have come on board, we get less of the X-Division. However, the matches are still there and when we get one I get into it. I am a fan of fast paced, high flying wrestling. I do know others that are not. The wrestling fans that still accept a clothesline as a finishing move for pro wrestling. It’s my kind of style and that’s why it makes the list.
A womens division that is not an embarrassment: Just like the X-Division, I know that since Hogan and Bischoff have come in, the division has suffered. However, much like the X-Division, at least there are still good womens matches. It is just not seen as often as in the past. While there are maybe one or two that are botchy, like Lacey Von Erich, the majority can go. It is the complete opposite of the WWE division, where the minority can wrestle.
Long World title reigns: I love the fact that TNA does not have their World title change much. This year, the TNA World title has changed hands once. Last year, there were three title changes. The WWE championship has changed hands four times in this year alone. I’m a fan of long title reigns. Mind you, I do not want a Bruno Sammartino reign but I feel longer reigns add value to a championship and TNA is doing a great job with that.
Pay per views: While TNA’s TV sometimes suffers horribly, if you buy a TNA PPV you will get great in ring action. In fact, it seems TNA actually builds to the PPV whereas WWE just gives you the same people from the last PPV fighting again. With really nothing added to the feud. Plus TNA is only $35 in the U.S. Each time I buy a PPV, I feel the event was worth it with exception to a few things.
Before I conclude this column, I want to address my NXT columns. As of this Monday, I have stopped watching NXT and will not watch it for the rest of the season. Therefore, there will be no special columns about NXT season 2. This past Monday, as part of storyline, WWE gave the NXT group all contracts. I do not mind that they got contracts as I’m sure they are great wrestlers. However, when an elimination, one man wins TV show ends with most getting contracts, I have to ask myself one question. Why should I watch the next season? Basically, it would be like if American Idol gave all of the top 12 contracts. It makes the show meaningless and since WWE basically told me NXT is meaningless I will not watch.
Listen to the latest show at sunsetflipwrestling.podomatic.com which features a new segment called “Hart Watch 2010” where we track Bret Hart each week as he continues to destroy his legacy one day at a time.