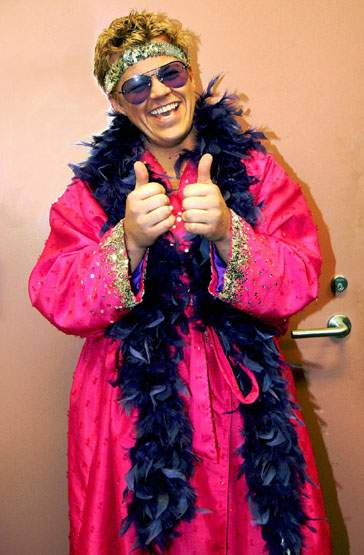 Jack asks about how Larry feels about the response of his recent promo for AAW. Sweeney says it feels great that people have commented positively on the promo. Sweeney doesn’t need any time before a promo to cut a successful promo.

Sweeney suggests that people check out the IWC. www.iwcwrestling.com Sweeney doesn’t understand how people do not know about the company and puts the company over heavily.

Sweeney continues to talk about promos and says that he doesn’t need to pre-plan his promo and whatnot.

Jack brings up Chikara and Sweeney keeps up with the product to a point. Sweeney says that all of his best friends compete for Chikara. Sweeney does say that he doesn’t buy DVD’s or anything.

Sweeney talks about all the things he has accomplished in wrestling. He mentions that he has wrestled Jake Roberts and Greg Valentine among others. Sweeney notes that once again this is just a job. Sweeney would go back on the road for ROH but he doesn’t enjoy flying. His desire to go back to ROH on a scale of 12 is currently a 5. That could change if he were given a good spot on the roster.

Jack mentions Pinky Sanchez and Sweeney’s hate for the guy. Sweeney says that Sanchez is a douche bag.

Barbie brings up Sara Del Ray and asks if Sweeney is surprised at how popular she has gotten. Sweeney isn’t aware that Del Ray has “blown up” as she isn’t on WWE. Sweeney does have respect for her.

Sweeney doesn’t believe that everyone involved in the business aim to make it to the WWE. Sweeney says that if Vince McMahon brought Sweeney in to be the general manager he knows he would be great.

Sweeney talks about only being a manager in ROH for two years and how people obviously overlooked his wrestling ability. Sweeney wrestled for Chikara and IWC at the time but a lot more people watch ROH. Sweeney mentions that he got paid well for what he was doing in ROH. Sweeney says that he enjoys psychology while the current guys in ROH are the opposite. “No, I never wanted to wrestle in ROH”.

Jack brings up Claudio Castagnoli and Sweeney says that Claudio always liked to eat at Subway. Sweeney and the hosts proceed to have a discussion about subs from Subway.

Jack says that some fans are saying that Sweeney sounds bitter. Sweeney says that it comes along with the business because you get beaten up for little money. Sweeney admits to being bitter. Sweeney notes that he needs to find a career now that he is 29. Sweeney goes into some personal examples. He mentions that he had a great girlfriend but wrestler was more important.

On that note, that is the end of the interview as Claudio was scheduled to follow.

For full audio please visit http://www.inyourheadonline.com Live this week will be “Lita” Amy Dumas and coming up Mick Foley.

To join the IYH message board please visit: http://inyourheadboard.proboards.com/index.cgi