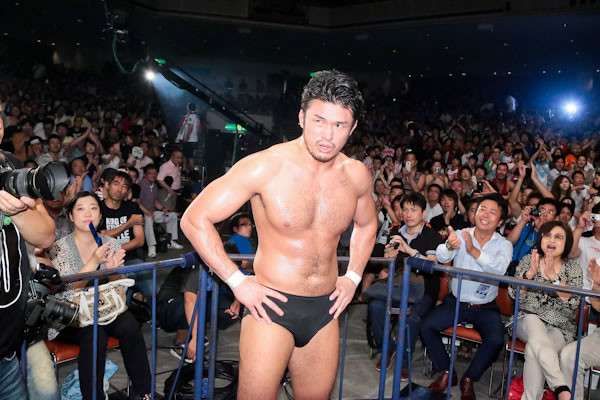 Welcome to The Armpit wrestling quiz for the week of April 24, 2017.

We’re taking a more serious tone this week, for two reasons.  #1, the apparent career-ending injury to Katsuyori Shibata will be one of the biggest stories of the year, and it’s a tragedy that could’ve been so easily avoided.  #2, this week I wrote a long, detailed account of the Hirai vs Taru backstage fight in Japan in 2011, and that’s an even bigger tragedy that could’ve been just as easily avoided.

As such, the theme of this week’s quiz is “Brain Injuries.”

1) At Shinsuke Nakamura’s NXT farewell, Finn Balor showed up at the end to congratulate him.  For all the talk about how Nakamura should’ve been called up months ago (and he should have), to me the most overlooked talent is Asuka.  She’s super talented, super sexy, and super over.  This is another example of Vince having a narrow minded view of who can get over, as I doubt she’s on his radar.

2) Of all the names listed who came out to congratulate Ric Flair for his farewell in 2008, Sting was not one of them.  He’d have loved to, but he was under contract to TNA at the time.

4) Daniel Bryan retired early (temporarily, in my opinion) because WWE’s doctors wouldn’t clear him to wrestle following his concussion and seizure issues.

5) Before the Undertaker walked to the back after his match at WrestleMania 33, he left behind his gloves, hat, and coat.  I’m still fascinated by the irony of Undertaker being the focus of Mania on the same weekend WWE tried to convince us they thought DDP is a Hall of Famer.  Obviously DDP belongs in the WWE Hall of Fame, but if WWE thought he was so great, why did they drop him in 2001 when he started to get over?  Because Undertaker didn’t think he could work, that’s why.  We’re all supposed to forget that now.

6) Public Enemy’s “final” show at the ECW Arena was billed as House Party ’96.

7) In his final match, Sting wrestled Seth Rollins, who threw him into the turnbuckles too hard.  He wouldn’t be the only one.

8) Ultimate Warrior’s role at WrestleMania 30 was being inducted into the WWE Hall of Fame.

9) “Shawn Michaels has left the building” was copied from Elvis Presley doing something similar at his concerts decades ago.

1.  The sad truth about Shibata is that in his match with Kazuchika Okada, he looked like a future IWGP Heavyweight champion and this match was his breakout moment.  At the very least, he could’ve have a series of matches with Okada that would rival the Okada-Tanahashi feud.  And in 1 second he risked it all.  After the sickening headbutt to Okada earlier this month, what happened to Shibata?

a) He immediately collapsed and they stopped the match.
b) He was in so much pain that the ref signaled for them to go right to the finish.
c) Fans turned on the match, booing in unison.
d) Blood immediately started pouring from his head, after which he paused, and continued the match before collapsing backstage afterwards.

2.  Daniel Bryan’s in-ring career really ended in 2015, long before he officially announced it.  But his problems pre-date that, and he had to take time off in 2014 after having his WrestleMania moment. His arm was a mess, on top of the numerous concussions he had suffered over the years.  It was a roller coaster of emotions in a whirlwind week for Bryan.  True or false: Not long after winning the title at WrestleMania and getting married, he unfortunately lost his father, and also his good friend
Connor Michaelik.

3.  For those who don’t follow All Japan, I won’t ask about any details of the insane Hirai vs Taru incident, which you can read about in The Armpit’s Backstage Fights section.  Still, you may have to Google this one.  Did Hirai ever wrestle again after that incident?

4.  Possibly the biggest story in pro wrestling history was the Chris Benoit murder-suicide.  His legacy as one of the best in-ring performers of all time has been completely erased from the books. There was evidence Benoit’s brain had suffered significant damage over the years.  What was one of his signature moves that may have contributed to that brain damage and head trauma?

a) German suplex
b) His air hanky, where he’d blow his nose on his opponent
c) Flying headbutt
d) Crippler Crossface

6.  Mick Foley’s body has been to Hell and back, and then to Hell and back again.  Anybody who had followed his career since 1990 could’ve seen this coming, like his nestea plunges in WCW, his sunset flips onto concrete, insane spots in the WWF that have been replayed forever, and of course all the chair shots to the head. The latter was captured in the movie Beyond the Mat, and it was uncomfortable to watch even back then.  Which WWF event, in which the Rock destroyed Foley’s head with countless chair shots to the head, was documented in that movie?

7.  So many class action lawsuits have been filed against WWE in recent years, I’ve lost count.  You can thank the NFL for that, as players there did the same thing and when lawyers smell money, they’re like vicious vultures who attack their prey as if their lives depended on it.  What is the reason most of these lawsuits have been unsuccessful?

a) Statute of limitations
b) Wrestlers haven’t picked good lawyers
c) Judges think wrestling is fake, so they always dismiss the lawsuits
d) Most of the wrestlers filing suit worked for several promotions in their careers, so it’s difficult to blame WWE alone for their brain issues

8.  Bret Hart wrestled a hardcore match against Terry Funk on WCW Thunder in early 2000, just days after he suffered a serious concussion at Starrcade ’99 by a stiff kick from whom?

9.  Mike Awesome was another wrestler who was known for suffering numerous concussions after working a hard style in Japan and later ECW.  How did Mike Awesome pass away?

10.  Lastly, you may remember the tragic story of Brian Ong.  If you don’t, Google it.  Ong was a student at the APW wrestling school in Hayward, CA run by Roland Alexander (the same school profiled in the aforementioned Beyond the Mat movie).  Ong suffered serious head trauma while training with APW, passed away, and his family successfully sued APW for damages.  What well known large, clumsy wrestler was Ong training with when the fatal bump occurred?