Home / Columns / The Flop of the WCW Invasion

The Flop of the WCW Invasion 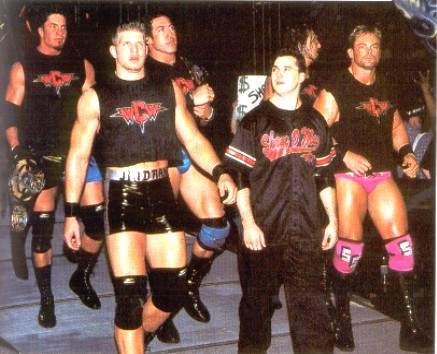 Every so often, somebody complains about the lack of execution on the WWE’s part regarding potentially awesome angles. As you can see from my title, this article is about to talk about the biggest flop of them all. That’s right. The WCW vs WWF Invasion was the most disappointing angles of all time. While it was good TV, it wasn’t what everyone thought the WCW vs WWF would have been all about.

The Invasion was supposed to be an on-TV culmination of the Monday Night Wars. It was known that WWF actually bought WCW during its dying days back in 2000. As 2001 came upon us, the WWE hatched a plan for an angle that would become arguably the greatest ever and really raise discussions as to which angle was better, nWo or Invasion. The Invasion was unsuccessful for many reasons. The two most obvious are the fact that, a) Shane McMahon and Stephanie McMahon ran the opposition while Eric Bischoff was not present and Paul Heyman was not given as much authority as he could have been if Stephanie was not there, and b) Most of the top WCW talent were not signed, such as all three members of the nWo, Scott Steiner, Ric Flair, Bill Goldberg, among others. The top man in the WCW was Booker T, and with all due respect, Booker is a great performer but lacked that presence that the nWo or Goldberg brought to the plate. Diamond Dallas Page was also there, but mostly feuded with the Undertaker, who at that time was not in a big role anyway. It just didn’t feel like the actual WCW vs WWF we all envisioned.

The stupid thing was that many of the stars that weren’t present at the Invasion were later signed. Hulk Hogan signed at deal with WWF about four months after the Invasion, Kevin Nash and Scott Hall both returned soon after, Ric Flair signed right after the Invasion, and Goldberg already under a contract in 2002.

The thing was, in the final confrontation between the Alliance and WWF, it was a classic Survivor Series matchup which was probably the fitting way to end the Invasion, but it was pretty one-sided, and made the WWF look so much better than WCW. You may be thinking, ‘Hey, the finish involved the Alliance leader, Stone Cold, getting blasted by Kurt Angle in order for the Rock to win’. Well, the actual matchup involved; The Alliance, consisting of Stone Cold Steve Austin, Rob Van Dam, Kurt Angle, Booker T, and Shane McMahon Team WWF, consisting of The Rock, Kane, Big Show, Chris Jericho, and the Undertaker. There were only TWO WCW/ECW guys, Booker T and Rob Van Dam, who didn’t do much in the match anyway. Second, Shane McMahon was over-sold and the Alliance mostly had Kurt Angle and Stone Cold wrestling the match. When the fans of WWF and WCW reminisced about a WCW vs WWF match back in the glory days of Monday Night Wars of around 1997, their match would have probably gone like this: WCW would probably have a team of Hollywood Hulk Hogan, Scott Hall, Kevin Nash, Goldberg, and Ric Flair against the maybe the WWF team of Stone Cold Steve Austin, The Rock, the Undertaker, Shawn Michaels, and Mick Foley. Something like that anyway, obviously, even if Vince had done this thing right and signed some good WCW talent we would have had a match a little different due to to her factors such as retirement or injuries or something, but still similar to that.

Yet another thing wrong with the Invasion was how less of a bang it made when it debuted. Had the ORIGINAL WCW writers (Eric Bischoff, not Vince Russo), actually contributed to this angle, not just Vince, it would have had something great, and would have looked like a huge impact. Bischoff probably would have done better than that, especially when he took three wrestlers and they terrorized the entire business, making them look like the Vikings, and WCW all of Europe(for those of you who don’t know, the Vikings were ruthless men who terrorized many parts of Europe). To me, the ignition of the Alliance was NOTHING compared to the magnitude of the nWo when it first came to power with the union of Hulk Hogan, Scott Hall and Kevin Nash.

When Shane McMahon came in, I honestly thought it was a joke. Because while Shane, in his career, had matches that made him look like a powerful man and a force to be reckoned with, it was only during matches he was put over by guys like Kurt Angle and Big Show. Don’t get me wrong, Shane is very entertaining, he just didn’t make impress on me what the nWo did. The WCW wrestlers weren’t made to be all that dangerous either, especially since Shane didn’t have the aid of a big name wrestler during the first few weeks of the Invasion (Booker T and RVD didn’t show up until about three months after Shane initially showed up on RAW).

To tell you the truth, I think the Alliance served the purpose Vince wanted it to serve. It brought in the money, since Invasion and Survivor Series both probably rank very high in the all-time PPV buyrates, and ticket sales would have been whopping, and it made the WWF look good. Maybe the whole purpose of Vince doing this Invasion anyway was just to try and show that the better company won out of WWF, WCW, and ECW. Maybe Vince didn’t make a big push to sign Hulk Hogan during 2001 because he thought that the WWF had too much credibility to lose. But it was a huge disappointment because it wasn’t close to what the fans had in mind about WWF vs WCW.