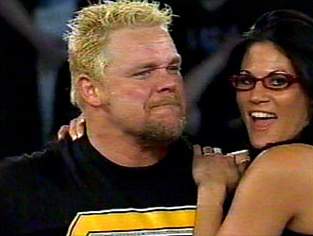 If you missed the Tuesday October 25th edition of the Online World of Wrestling Radio with host Alan Wojcik with weekly contributor Spug. Here are the highlights:

The 1st interview of the evening came courtesy of our friends at Crossfire Wrestling who will hold “A New Beginning” on November 5th in Nashville, TN. Our guest was former ECW/WCW/WWE/TNA superstar “The Franchise” Shane Douglas.  During his time with Alan & Spug, Shane talked about his new DVD project with Kayfabe Commentaries (Timeline History of ECW 1994), many historic moments in ECW history, how much Paul Heyman owes him, who he feels is being held back in TNA and much more. Log onto www.crossfirellc.vze.com for the entire lineup heading to the TN State Fairgrounds! You can also check out Shane on www.franchisefansite.com

Our special guest contributor was the co-author of the WWE Encyclopedia Brian Shields who talked about the new line of WWE video game accessories from Game On (Follow on Twitter @GameOn_Games), the new Bret Hart/Shawn Michaels DVD release, recapped the Vengeance PPV and the recent events on Monday Night Raw including John Cena wanting the Rock as his Survivor Series partner. Spug & Brian presented some interesting dynamics that could be put in place for the PPV.

Alan has worked the emails and we have scheduled interviews with the following people: November 1st: WSU star Becky Bayless & “Hotshot” Johnny Devine November 8th & 15th we will be joined by more stars from Women Superstars Uncensored

http://wildtalkradio.com/oww/owwradio102511.mp3 is one way how you access the archive of THIS show. Click it you know you wanna!! You can also get this and other past shows, by logging onto www.clickwrestle.com/podcasts/owwradio. ClickWrestle Video On Demand is also home to thousands of matches from around the globe. The show can also be found on iTunes http://itunes.apple.com/us/podcast/oww-radio/id334739148?ign-mpt=uo%3D4. Best part it’s FREE!!