The Intercontinental title is now vacant 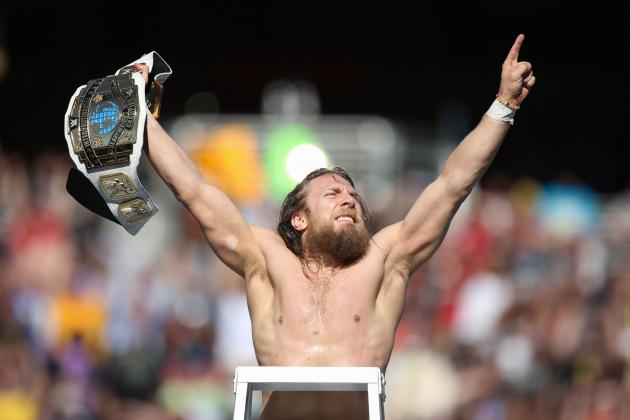 The decision for Daniel Bryan to vacate the WWE Intercontinental Title was made on May 8th after Bryan and WWE officials received MRI results on his shoulder. WWE had been hoping Bryan would be back in action by later this month but that was ruled out when they got the MRI results.

Bryan is not scheduled for this week’s SmackDown tapings but is still scheduled to work Sunday’s Payback pay-per-view and next week’s WWE TV tapings, possibly working an angle to start the process to crown a new champion.

Here is a recap of the segment:
We go to the ring and WWE Intercontinental Champion Daniel Bryan makes his way out to a big pop.

Fans chant “yes” as Bryan heads to the ring. Bryan has a serious look on his face but smiles as fans chant his name. Bryan finally speaks and says he’s been in and out of doctor’s appointments the past few weeks. He says he’s had a lot of downtime and doesn’t do well with downtime. He says he needs to be where excitement and energy is. Fans pop and start another chant. Bryan says he needed to be standing backstage waiting for his music to hit so he could come out and be part of a reaction like the one he just got. Bryan asks how long fans have been treating him like he’s special and says it feels like years. Bryan says that’s why it was so crushing to him last year, almost one year ago, when he was stripped of the WWE World Heavyweight Title. Fans boo. Bryan says he felt like he let fans down then and credits fans for getting him the title shot.

Bryan says it’s hard for him to admit that Stephanie McMahon was right to strip him of the title last year because nobody knew when he would be able to perform again. Bryan says fans deserve a fighting champion, which is why he asked to come out tonight. He says he had a MRI done and doctors don’t know when he will return – weeks, months or he may never wrestle again. Bryan says we deserve a fighting champion and that’s why he’s relinquishing the title. A huge “thank you Daniel” chant breaks out and Bryan says we have it all wrong – he thanks the fans. Bryan leave the title sitting in the ring and walks up to the stage as fans chant “thank you Daniel” some more. Bryan’s music hits and he starts a big “yes”! chant before walking to the back. We go to commercial.

Back from the break and the announcers talk about Daniel Bryan.