The Legacy of Chris Benoit 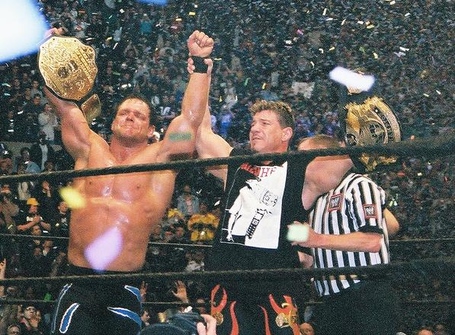 [NOTE – this column appeared on www.cagesideseats.com…I thought the author, C.J. Bradford, did a great job.]

Over the course of two decades, Chris Benoit scratched and crawled his way through the ranks of professional wrestling to hone his skills and become one of the best to step foot inside the squared circle. There were trials and tribulations, from the very beginning to the very end of his career. But he was one of the best in the business, and, for a brief moment at WrestleMania XX, he stood tall at the top of the professional wrestling world.

Over the course of three days, Chris Benoit brutally strangled his wife, Nancy, and son, Daniel, before finally hanging himself. It was a series of calculated, disgusting acts that ended the life of two innocent people and a man with severe problems. What Benoit did should never be forgotten, and can never be forgiven.

Both stories are of the same man, and yet somehow they seem so different. A story of a hero who worked his ass off to achieve greatness. And that of a villain who murdered his family in the most cowardly of acts. It’s not the traditional good guy vs. bad guy most pro wrestling fans are accustomed to, but something far more real.

How is it possibly to deal with the legacy of he has left behind? This is a question that fans, and the WWE itself, have struggled with. How can we ignore the brilliance of Benoit?

But how can we hail a monster?

It will be five years ago that Chris Benoit committed the double murder and suicide that left his son, his wife, and himself dead within his home. Starting on Fri., June 22, 2007, he bound and strangled his wife, placing a bible by her side. Over the course of the weekend, he would place calls and texts to his co-workers, all the while sedating and strangling his 7-year-old son. A bible was also placed by his side. Finally, Benoit hung himself from a weight machine, ending his own life similarly to how he ended his family’s.

No one with any type of heart or conscience can read that and feel the slightest bit of sympathy for Benoit. There is still plenty of debate over what would cause a kind hearted, God-fearing man to snap and turn on his loved ones. A career filled with steroids and drug abuse caused enough problems, but the investigation done by the Sports Legacy Institute has shown that “Benoit’s brain was so severely damaged it resembled the brain of an 85-year-old Alzheimer’s patient.” The years of diving head butts and 300-plus night schedules had completely destroyed his brain and transformed him into a different being. One cannot imagine the pain he was in during his final days, and if he was even aware of reality.

But whereas other athletes that have suffered from years of concussions and brain damage — such as Junior Seau or Dave Duerson — had ended their lives to escape the pain, Chris Benoit viciously ended his family’s lives as well. No amount of rationalization or excuse making can ever change that fact. No matter how much the treatment of pro wrestlers sucks, how badly Benoit’s injuries and addictions were mishandled, and how damaged his brain was, he was responsible for his own body and his actions. Nothing in the ring happened without his consent, and degenerative brain damage does not happen overnight. He did not help himself in any way. And three people — two of them innocent victims — are dead because of it.

With all that being said, though, Benoit was still one of the best professional wrestlers in the history of the business. To ignore that is to play revisionist history, something WWE has painfully tried to get away with doing. There is virtually no mention of his name on WWE.com. He has no bio, no pictures, no videos, and his title reign is left virtually bare. Footage of him has been removed from WWE Classics, as well as DVD releases. If it happened within a ring and was recorded, Vince McMahon owns the rights to it, and he has made sure to remove all traces of Benoit with such a fury that Big Brother would blush. According to WWE, Chris Benoit has never existed within the history of professional wrestling.

There have been some fans who have followed suit, with some even refusing to acknowledge him. “He-who-must-not-be-named” has become the stand in, as if the name itself has become toxic. The irony, though, has been lost on those that use the nickname. Derived from the Harry Potter villain Lord Voldemort, the lesson from the books was supposed to be that no evil is too great to not address directly. By playing into McMahon’s game, we stunt our own ability to deal with Benoit’s legacy.

There have been others who have committed horrible acts that mirror Benoit’s situation. O.J. Simpson will always be one of the greatest running backs in collegiate and professional football. He is a Heisman trophy winner, a five-time All Pro selection, and a member of both the NFL and College Football Hall of Fame. He is also accused of murdering his ex-wife Nicole Brown and her friend, Ron Goldman. While he was acquitted of all charges, it is generally believed that he did indeed commit the murders. He has not, however, been removed from football history. His Heisman has not been revoked and he has not been removed from the Hall of Fame, nor has anyone attempted to remove him from history.

We could go on and on with other examples. Michael Jackson is, was, and always will be the “King of Pop.” The “Michael Vick Experience” will always be one of the most electrifying rides in all of professional sports. There will always be those who hold their crimes against them. But there will be just as many who can separate the legend from the criminal.

Just as Simpson’s 1968 Heisman year is one of the greatest ever, just as Smooth Criminal is one of the greatest pop videos of all time, WrestleMania XX’s main event is one of the most exciting matches to ever take place. It should be one of the crown jewels in WWE history. The main event of the biggest show in professional wrestling. Three of the best talents in one ring (albeit slightly past their respective primes). The most famous arena in the entire world. One of the most memorial spots, with Triple H appearing from out of nowhere to stop Shawn Michaels from tapping to the Crippler Crossface. And a final celebration with Chris Benoit and Eddie Guerrero that brings a tear to any fans eye (now for entirely different reasons). It should be celebrated for the pinnacle of Benoit’s long and painful career. The moment when he could finally say he was the best in the world.

And yet it has been removed from history. WWE will never mention that match. It will never acknowledge the blood, sweat, and tears that fell to that mat. Because if they don’t acknowledge the great, they won’t have to deal with the evil. Professional wrestling lives within its own universe. Wrestlers real names become owned by the promotion they work for. Injuries disappear with the roars of a crowd and the shake of a head. Even death itself can be reversed. In an existence where “all that was fake, but this is real” can be said without a trace of irony, how can one assume that pro wrestling can handle real life with the slightest bit of delicacy? Overreaction is the only reaction that can be expected.

I think fans can handle the legacy of Chris Benoit in a more appropriate manner, though. He was an amazing talent, a hard worker, and one of the most passionate men in the business. He also committed a disgusting act by ending the lives of his wife and child. These are two facts that can live side by side. We can respect and love the professional wrestler while condemning the man’s final deed.

What is Chris Benoit’s legacy? It is in the lessons he has taught us. Work your ass off every single day at whatever it is that you do, and you will achieve greatness. Push yourself to your absolute limits, but never past them. Take care of your mind and your body. Love your family with all your heart. When someone you know is hurt, mentally or physically, make sure you get him or her help. Do not shy away from evil, but instead address it head on. Trying to erase the past only fails to honor those that have fallen.

For better or for worse, there will only be one Chris Benoit. It is time to stop pretending there wasn’t.

Related Items
← Previous Story ON TO THE NEXT ONE…
Next Story → Women’s Wrestling Write-up: Week 4